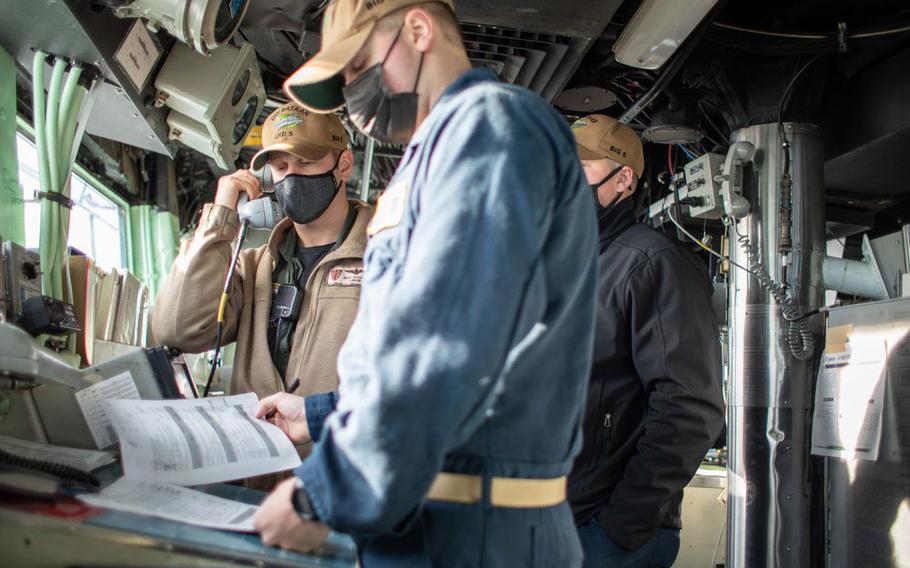 After 16 months helping out at a shipyard overhaul, USS Bataan sailors are back at their regular tasks, like standing a bridge watch. (Christopher Jones/U.S. Navy)

(Tribune News Service) — They called them “tiger teams” — USS Bataan sailors taking on new kinds of tasks while their ship was being renovated at NASSCO-Norfolk.

Their work helped get Bataan out of the shipyard ahead of schedule.

The Norfolk-based amphibious assault ship is now in the first phase of work-ups to prepare for deployment — and sailors are back to the more usual jobs of standing bridge watches, drilling on damage control and firefighting, practicing launching and recovering landing craft on the ship’s well deck, as well as the marlinspike seamanship of handling lines.

In the yard, however, work was different.

“We had multiple enlisted led ‘tiger teams’ that painted out thousands of square feet of spaces, lagging teams that replaced missing or worn out insulation, a valve repair team, and a door team to name a few. I’m consistently in awe of the investment our sailors make in their command,” said Capt. Joseph Murphy, Bataan’s commanding officer.

Bataan was in NASSCO for 16 months, for the major work in what the Navy calls a “Chief of Naval Operations availability.”

The work included general upgrades and restoration to the flight deck, hangar bay and engine room, including all-boiler inspections. The ship’s drinking water and waste handling systems were a top priority.

Bataan’s computer network was modernized, too.

Amphibious ships like Bataan operate close to shore and are the bases from which Marine Corps expeditionary troops hit the beach.

Another major effort in the shipyard was to reconfigure the Marines’ rifle storage facility and ammunition locker.

“Modifications of Marine Corps living and storage spaces were also completed, as well as overall projects in our Chief’s Mess, and Wardroom lounges, all in an effort to ensure ship’s readiness while increasing and maintaining quality-of-life upgrades,” Murphy said.

Bataan’s leadership arranged for more than 2,000 training sessions for the crew, including firefighting, air traffic controller schools, and search and rescue swimmer school.

“From the start, we made training a focus with the intent of home-growing as much talent as we could, given the manning shortfalls across the fleet,” Murphy said.

“We sent multiple enlisted sailors and officers out with other ships to gain critical experience not available while in the shipyard environment. In the shipyard, daily damage control and shipboard firefighting evolutions kept the crew prepared and ready” for the at-sea exercises and certifications they are now working on, Murphy said.

Planning for the shipyard work started well ahead of Bataan’s arrival there in late 2020, with a detailed plan for what was to be done when and what were the specifications each repair or modernization needed to meet, said Capt. Terry Patterson, the maintenance officer for Expeditionary Strike Group 2.

When Bataan went into the shipyard, NASSCO had just finished a similar “CNO availability” for USS Kearsarge — which deployed last week with USS Arlington, USS Gunston Hall and the 22nd Marine Expeditionary Unit. That put the yard in a position to “identify and implement high speed changes” to make the maintenance work go faster and more efficiently, Patterson said.

“Success was a collaborative effort between the thousands of contractors, sub-contractors, vendors and other stakeholders from all over the region and the sailors and civilians of MARMC [Mid-Atlantic Regional Maintenance Center],” said Capt. Tim Barney, who commands the Norfolk-based group that oversees ship repair work here.