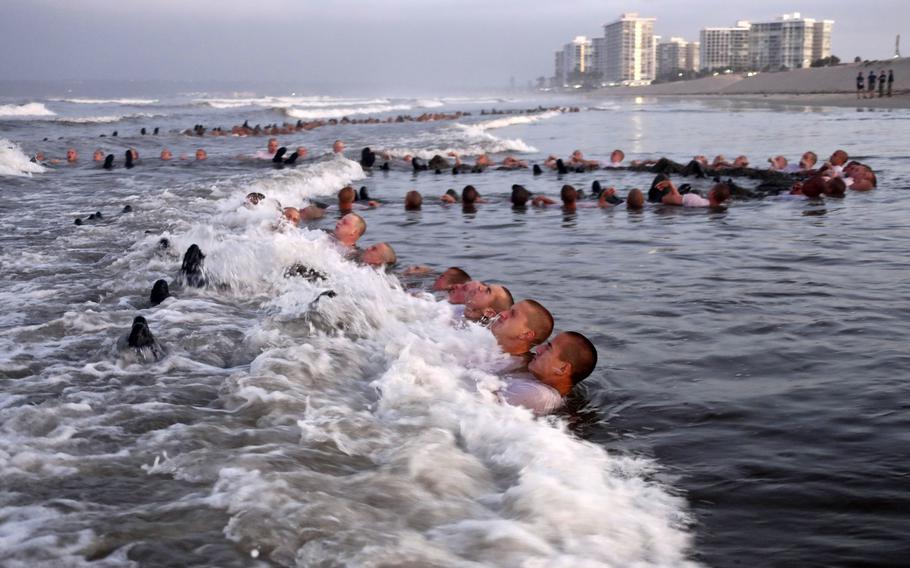 In this May 4, 2020, photo provided by the U.S. Navy, SEAL candidates participate in “surf immersion” during Basic Underwater Demolition/SEAL training at the Naval Special Warfare Center in Coronado, Calif. More than two dozen Navy SEALs and other service members, who said the Department of Defense has punished them for refusing the COVID-19 vaccination due to religious reasons, are asking the U.S. Supreme Court to uphold a preliminary injunction issued in January that sided with the military members. (Anthony Walker/U.S. Navy)

(Tribune News Service) — More than two dozen Navy SEALs and other service members, who said the Department of Defense has punished them for refusing the COVID-19 vaccination due to religious reasons, are asking the U.S. Supreme Court to uphold a preliminary injunction issued in January that sided with the military members.

"The Navy service members in this case seek to vindicate the very freedoms they have sacrificed so much to protect," wrote U.S. District Judge Reed O'Connor, of Fort Worth, who issued the injunction, which has been upheld by the U.S. Court of Appeals for the Fifth Circuit.

"The COVID-19 pandemic provides the government no license to abrogate those freedoms," O'Connor continued. "There is no COVID-19 exception to the First Amendment. There is no military exclusion from our Constitution."

Thirty-five military members, including SEALs and other special forces members represented by First Liberty Institute in Plano and Hacker Stephens LLP, are asking the Supreme Court to reject an emergency motion from the Biden administration that's seeking to stop the injunction.

"Despite over 99% of the Navy being vaccinated ... the Navy has not granted a single religious exemption for the COVID-19 vaccination to any active or reserve duty service member while granting hundreds of exemptions for secular reasons," according to the attorneys' response in opposition to a stay of the injunction.

Court documents said that one Navy SEAL who refused the COVID-19 vaccine was denied medical treatment for a traumatic brain injury and another former SEAL Team Six member, who's also a 25-year veteran, was forced to comply with the vaccine mandate "despite his sincere religious beliefs."

Other Navy SEALs said they were denied training, although the "qualifications are needed and enhance safety," and that they were subjected to picking up trash, pulling weeds and picking lint out of Velcro.

"The injunction merely preserves the status quo while this case is litigated. Far from supplanting military judgment, the injunction retains the judgments the Navy already made in terms of plaintiffs' jobs, pay, and training," court documents from the plaintiffs read. "The only things that changed those judgments were plaintiffs' requests for accommodation of their sincere religious beliefs against COVID-19 vaccination. The evidence shows that before those requests, the Navy assigned plaintiffs to their current duty stations and even successfully deployed many of them during the pandemic despite vaccination status."