Vaccine mandate for Navy SEALs to remain blocked, US Court of Appeals rules 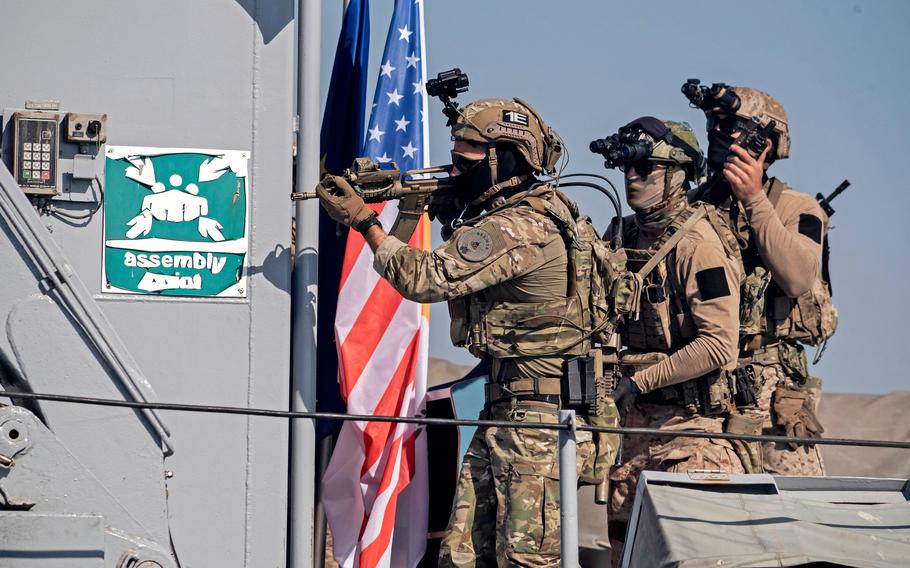 Cypriot Navy special forces and US Navy SEALS take part in a joint US-Cyprus rescue exercise in the port of the southern Cypriot port city of Limassol on September 10, 2021. According to reports on Tuesday, March 1, 2022, the Biden administration’s attempt to reinstate the U.S. Navy’s COVID-19 vaccine requirement was denied by a federal appeals court. (IAKOVOS HATZISTAVROU/AFP via Getty Images/TNS)

FORT WORTH, Texas — A federal appeals court denied the Biden administration's attempt to reinstate the U.S. Navy's COVID-19 vaccine requirement Monday, more than a month after a federal judge in Fort Worth initially halted the mandate.

The mandate, which required all active-duty Navy service members to be fully vaccinated by Nov. 28, is being challenged by a group of U.S. Navy SEALs and other Naval special warfare personnel. The group says the mandate violates their religious freedom and that they have unjustly been denied religious exemptions from receiving the vaccine.

In early January, U.S. District Judge Reed O'Connor of the Northern District of Texas signed a preliminary injunction blocking the mandate while the case reaches a final judgment.

On Monday, the U.S. Court of Appeals for the Fifth Circuit denied the Department of Defense's emergency stay request, which would have allowed the mandate to go into effect as the case goes through courts.

"[Evidence] suggests that the Navy has effectively stacked the deck against even those exemptions supported by Plaintiffs' immediate commanding officers and military chaplains," the three-judge panel said.

First Liberty Institute, a nonprofit interest law firm based in Plano, is representing the SEALs and other personnel in the suit.

"Our military should be welcoming service members, not forcing them out because of their religious beliefs," said Mike Berry, director of military affairs for First Liberty Institute.