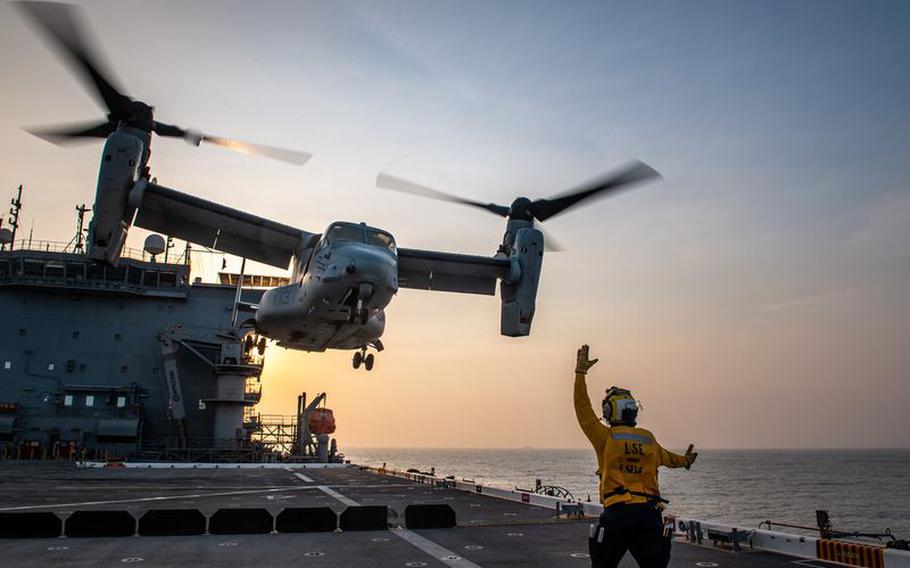 (Tribune News Service) — The corridor in Building J-50 at Naval Station Norfolk doesn’t look anything like the weeks-long round of at-sea drilling most sailors do before deployment — but then, the Blue Crew of USS Lewis B. Puller’s sailors are a bit different.

Their ship is nearly 7,000 miles away in the Persian Gulf.

As the Norfolk-based Blue Crew prepares to depart in a few weeks for another five-month tour, replacing the Puller’s Gold Crew, a half-dozen sailors are in the combat systems cubicle, getting a typical at-sea briefing. A few steps down the corridor, Petty Officer 2nd Class Joshua Jones is poring over technical briefs and updates on aviation fuel handling.

“We don’t have the usual phased in for readiness. We have to be always combat-ready,” said Capt. Daryle Cardone, the Blue Crew commanding officer.

“We could be here in Norfolk on Monday, and on Friday, in contested waters with an Iranian-flag vessel approaching.”

During the Blue Crew’s last deployment in Bahrain, Petty Officer 3rd Class Kendra Barrow — whose official job is to cook — was scrambling up to the flight deck to document encounters with Iranian ships.

“I never had a chance to get out of the galley before,” she said. “It makes me feel like I’m really in the Navy.”

She regularly acts as messenger of the watch as part of the Puller’s navigation team that drives the warship — in addition to cooking for her shipmates.

Blue Crew’s 100-plus sailors often take on jobs outside their official rating. Along with a team of civilian mariners who handle some navigation and the engine room, they run one of the largest and newest kind of ships in the Navy.

The 765-foot Puller’s job is to get close enough to shore for Marines and Navy special warfare operators to launch missions. Built on the hull of a Navy tanker, it has a flight deck that handles helicopters and tilt-rotor aircraft. Its two huge rudders mean the big ship is surprisingly maneuverable, even in the tight spaces of the Gulf.

The Blue Crew is just over one quarter the size of the crew on the newest guided missile destroyers.

For Petty Officer 1st Class Jessica LeCour, the Blue Crew’s independent duty corpsman, that means she gets to know her shipmates’ state of health well. That gives her more scope for preventive and wellness care.

On her previous ship, she was in charge of a department that did not have a doctor, but with a crew was over three times as large.

“My phone was ringing all the time — I couldn’t get out of medical at all,” she said.

On the Puller, though, she’s still on call 24 hours a day, and has had anti-terrorism and flight deck safety watches.

She stands CDO — command duty officer — watches during Puller’s typically brief stops at its official home port in Bahrain. Basically, that means her job is to free up Cardone to take care of non-routine issues or even, he jokes, take a brief liberty stay onshore.

But when Jones, whose job is to shepherd thousands of gallons of explosive aviation fuel safely, has an problem with the complex system of pipes and pumps and valves that make up Puller’s fuel system, he’s free to go directly to Cardone.

The way Jones and his shipmates step up to take on a range of tasks outside their official duties means daily life with Blue Crew feels different than time on other ships.

“I know they can do anything we need to do,” Jones said.

Command Senior Chief Jerry Gonzalez, the Blue Crew’s top enlisted sailor, said the need to take on many different tasks gives sailors a leg up on the advancement ladder. Though his own rating had been as an electrician, Gonzalez regularly pitches in alongside Barrow in the galley making his trademark pizza.

“Everybody likes that,” Cardone said.

“I know everyone is willing; the lieutenant will come in to the galley an get his hands dirty,” Barrow said, pointing to Lt. Joshua Croft, the supply officer who is her department head.

The unusual five-months-onboard, five-months-in-Norfolk cycle between Blue Crew and its counterparts on the Gold Crew works out better for many sailors than sea-duty usually does, said LeCour.

“On a DDG (destroyer), you’re always going out for a week or two or more,” even before a typical six-months-plus deployment in the Mediterranean, Middle East or eastern Atlantic, she said. Even pierside, sailors often have to sleep aboard.

“But we have a lot of ways of keeping in touch when we’re on the ship,” she said. “I don’t worry about how my cats are doing or what’s with my car.”

And, says Gonzalez, the schedule means sailors on deployment don’t have to worry that a special meal — like his pizza — signals an unexpected extension of time away from home.

“I tell my wife, I’m off for five months and she says ‘Oh? only five months,’” the 22-year Navy veteran says.

Its mobility, and capacity to be a base for aircraft and small boat operations, give the Navy options for a rapid response to challenges on distant shores, Cardone said.

And it allows Navy and Marine forces to be places without sending the kind of signal that a carrier strike group or amphibious ready group would.

“There isn’t a rule book yet for ESBs,” Cardone said. “What these sailors are really doing now is writing one.”