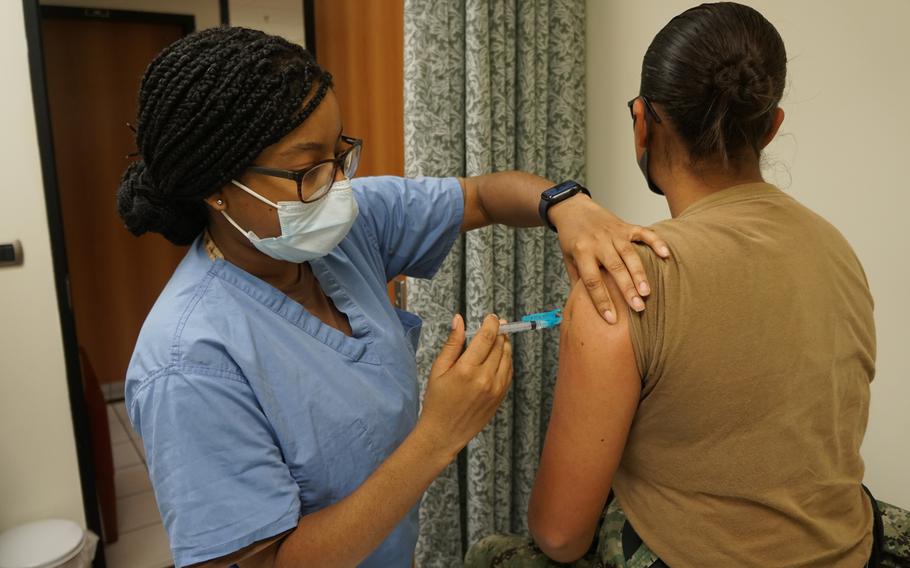 Seaman Dayshia Hall, a hospital corpsman assigned to U.S. Navy Medicine Readiness and Training Command Sigonella, vaccinates a sailor at Naval Air Station Sigonella, Italy, Aug. 30, 2021. Military officials with the U.S. Navy are punishing Navy SEALs and other Naval service members for seeking religious exemptions to a COVID-19 vaccine mandate in violation of a court order, according to attorneys for the service members. (Nathaniel U. Corpuz/U.S. Navy)

FORT WORTH, Texas (Tribune News Service) — Military officials with the U.S. Navy are punishing Navy SEALs and other Naval service members for seeking religious exemptions to a COVID-19 vaccine mandate in violation of a court order, according to attorneys for the service members.

Attorneys for First Liberty Institute filed a motion Monday requesting a federal court to set a hearing and order the U.S. Navy to show why it should not be held in contempt of the court.

The North Texas law firm amended its lawsuit just a few days ago on behalf of dozens of U.S. Navy SEALs to seek a class action that includes all U.S. Navy personnel who have requested religious exemptions.

First Liberty Institute is a nonprofit public interest law firm based in Plano that seeks to defend Americans' religious freedoms, according to a news release.

Attorneys for the secretary of defense have filed an appeal to the United States Court of Appeals for the Fifth Circuit in New Orleans on the injunction.

Those attorneys also have filed a motion to dismiss the lawsuit, saying the Navy service members have not exhausted all administration avenues. If not dismissed, the case should be transferred to either the District of Columbia, the Eastern District of Virginia or the Southern District in California, according to the motion.

Rulings on the appeal and the motion to dismiss are pending.

In the motion filed Monday, attorneys for the Naval service members noted they are facing continued harassment and punishment for seeking religious exemptions to the vaccine mandate.

"The Navy continues to deny our clients training and deployment opportunities and is assigning these soldiers menial tasks instead of allowing them to defend our country," said Mike Berry, general counsel for First Liberty Institute, in a Tuesday news release. "This religious discrimination must stop."

Court documents filed Monday state that a Navy SEAL continued to be denied permission to travel to a treatment program for traumatic brain injuries, which the court had already called an "egregious example" of harm suffered by the plaintiffs.

Attorneys said "continuing to ignore this SEAL's medical needs, even in the face of the court's explicit recognition of the harm to this SEAL in the preliminary-injunction order, is simply inexcusable."

The Navy SEAL offered to pay for travel to treatment at his own expense, but that was denied after "multiple high-ranking Naval officers in the Navy SEALs' command began calling the treatment center and asking if it would deny treatment to someone who is 'unvaccinated,'" delaying his request long enough for him to lose his spot at the treatment center, documents state.

"It is reprehensible that the Navy would deny health care to a Navy SEAL suffering the effects of traumatic brain injury," Berry said in a news release. "Despite the court's clear order prohibiting this kind of vindictive abuse, the Navy continues to punish and harass these warriors."

Attorneys also noted that in another example, a Naval service member has been kept for four months at a training location where he was only supposed to be for four weeks and "is required to get special permission from the commanding officer to leave the base for any reason, even to get groceries or fill his car with gas."

In addition, SEALs are being denied training and deployment opportunities, according to court documents.