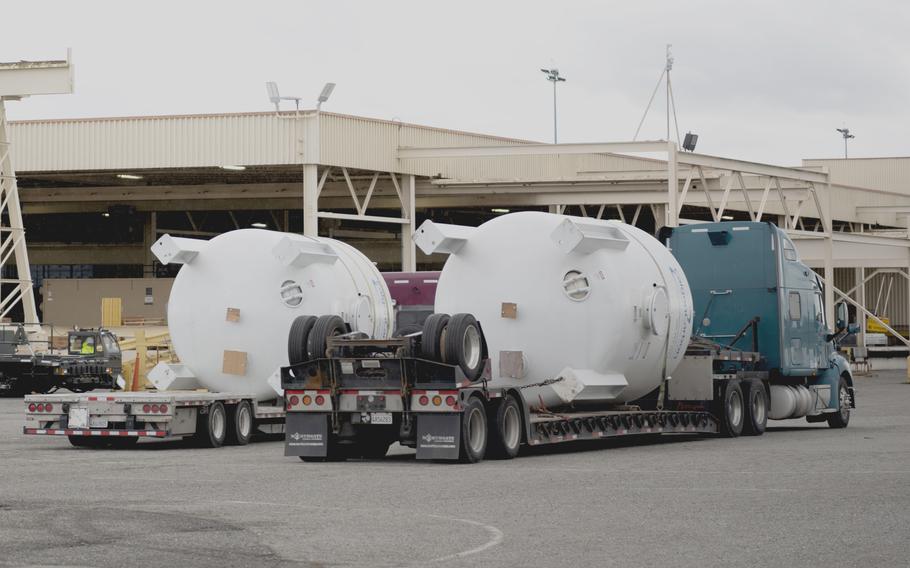 HONOLULU (Tribune News Service) — In a push to remedy water system contamination resulting from spilled jet fuel from the Navy's underground Red Hill fuel storage facility, the Navy is consulting with experts from around Hawaii and the mainland on new procedures for flushing the system, bringing in new equipment to help with the effort and drafting long-term plans.

Among the experts on the scene is Andrew Whelton, a professor of civil engineering and environmental and ecological engineering at Purdue University in Indiana. Whelton has worked on responses to several water contamination incidents around the country, including toxic chemical incidents.

"We were called in to provide support to the military and other agencies so that they can make the decisions that need to be made, based on experience from all these other incidents," said Whelton. "I'm heartened by just the momentum that's happening here."

In the affected areas there have so far been two types of flushing. The Navy has asked residents to run their water, flush toilets and other devices to remove contaminants. Some residents reported that chemical fumes became overwhelming when they started flushing. In response, Navy officials told those residents to stop the flushing.

The Navy estimates about 3,200 families have been displaced from military housing and are now living temporarily in hotels.

"We're focusing on developing a checklist for our residents when they come back home — for them to use to flush their home as part of the recovery efforts to clean the water system and provide them safe water," said Navy engineering officer Lt. Keji Aderibige.

Navy authorities had also initiated flushing out hydrants as a means to clear out main distribution lines. But on Saturday the state Department of Health issued the Navy a cease and desist order. The DOH said the Navy wasn't following state guidance and had received complaints that the Navy wasn't properly cordoning off areas.

In response, the Navy has ordered several granulated-¬activated carbon filter systems, which will extract water from hydrants. Navy Lt. Cmdr. John Daly of the Navy's response team said 21 of these devices are coming to Hawaii on a mixture of military and commercial aircraft as part of an emergency order.

"We've heard their comments, and that's where we re-geared our approach, " said Daly.

However, it's not immediately clear where the Navy will put the contaminated water once it's out of the system.

"We're taking the advice from the federal Environmental Protection Agency as well as the Hawaii Department of Health — they've given us great advice. And we're very close to being able to communicate that plan for exactly how we ... dispose of" tainted water, said Daly.

Whelton said that while that answer might fall short of what affected families and neighboring communities want to hear, it's a positive sign that decision-making is being planned carefully. Whelton pointed out that in other contamination cases around the country, he has seen chemicals and other contaminants dumped into septic systems as well as in soil and rivers.

"Often what happens after incidents is that people make decisions without actually running it all the way down, figuring out if it is OK. And then looking back is not something that happens. Here, I see that differently, so I think that's a positive," Whelton said.

"In Hawaii you're seeing an intense focus on the DOD (Department of Defense ) side of things and Department of Health and the public to make sure we know where we're putting the water."

Lindsey Kelley lives at Halsey Terrace with her soldier husband, two children and two dogs. Her family was among those affected. The Navy's water system serves some 93,000 people.

"It wasn't strong in our house, " Kelley said. However, she added that while drawing a glass of hot water, "I could smell it in the lines."

While many families relocated to hotels, Kelley's family decided to stay put. Their garage is stocked with jugs of water for drinking and daily use. An avid gardener, Kelley stopped using the Navy system's water on her peppers and banana tree, but said she has been using it on plants that are purely decorative. She has also been moving potted plants into the driveway so that they can soak up rainwater.

Like many residents, Kelley said she's been frustrated with the military's mixed messaging in the aftermath of the spill. She said that whenever she hears an update from the Navy, she cross-checks it with what the Army is saying.

Top officers with the Navy's Pacific fleet told Hawaii lawmakers during a joint session of the Legislature on Friday that they think the contamination of the Red Hill well stems from a Nov. 20 release of JP-5 jet fuel from the fuel storage facility's fire suppression system.

Additionally, Kelley said she's frustrated by the lack of a timeline for tackling the contamination problem. Daly said a timeline would have to be "conditions-¬based." That is, he said, the results of water samples "will dictate the speed at which we declare the water potable."