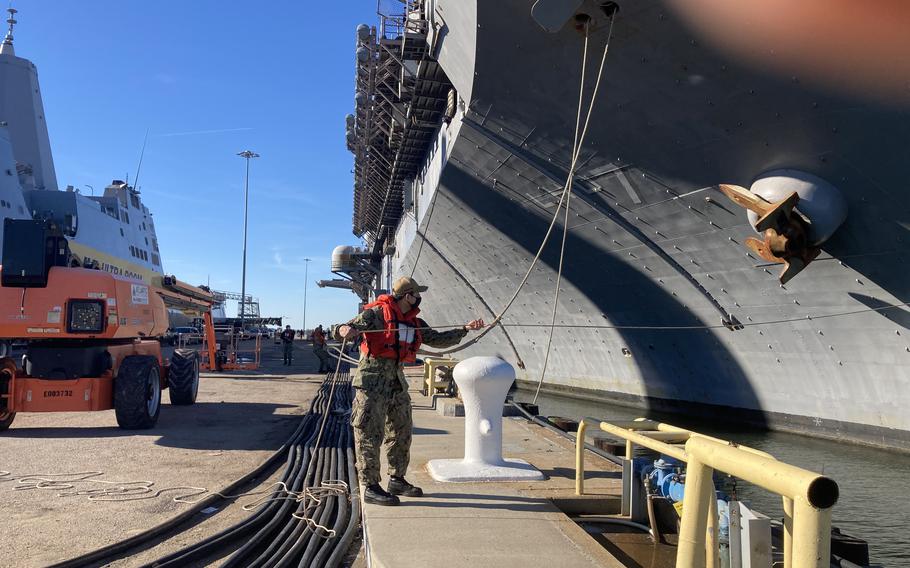 As USS Iwo Jima nears the end of its homeport shift to Norfolk, a sailor hauls in a mooring line to secure the ship at Naval Station Norfolk. (Dave Ress, Daily Press/TNS)

(Tribune News Service) — The Navy has completed the shift of its East Coast amphibious fleet to Hampton Roads, Va., with the arrival Monday of the USS Iwo Jima from Mayport, Fla.

A half of a year of preparations and planning went into moving the ship’s 1,150 sailors and their families from Florida, Capt. Judd Krier said.

Most of the families are already here, and are settling in with the help of Fleet and Family Services, the housing office and the connections many crew members had forged from earlier stints in Hampton Roads, he said.

“It feels good to be back in Hampton Roads,” Krier said, noting that the Iwo Jima’s home port had been Norfork until 2014. He’s starting his fourth stop in Hampton Roads.

The Iwo Jima’s move means Norfolk is home to four amphibious assault ships, the large ships that lead the groups that operate with Marines and specialize in operating close to coasts.

The aim is to make maintenance and repair work easier by keeping the ships closer to the shipyards that do the bulk of the work.

To keep the economic impact of the amphibious move from hurting Mayport, the Navy has been moving some guided missile destroyers there.