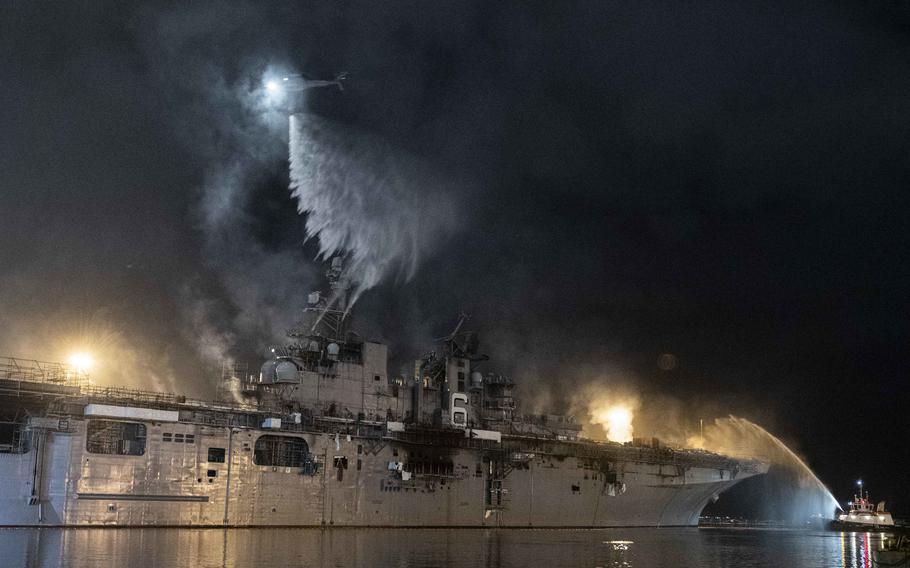 A helicopter from Helicopter Sea Combat Squadron 3 combats a fire aboard the amphibious assault ship USS Bonhomme Richard at Naval Base San Diego, July 14, 2021. Navy investigators cited the lack of a fire main on the Naval Base San Diego pier where the amphibious assault ship Bonhomme Richard was moored as one of several obstacles firefighters encountered upon first responding to the inferno. (Garrett LaBarge/U.S. Navy )

SAN DIEGO — Recommended improvements to Navy infrastructure at its San Diego bases should be part of next year's defense-spending bill after two service investigations found that the lack of firefighting resources on the pier contributed to the July 2020 Bonhomme Richard disaster, Navy Secretary Carlos Del Toro said Monday after spending the weekend touring base facilities.

Navy investigators cited the lack of a fire main on the Naval Base San Diego pier where the amphibious assault ship Bonhomme Richard was moored as one of several obstacles firefighters encountered upon first responding to the inferno. The Union-Tribune reported Saturday that none of the San Diego piers where Navy ships routinely moor while in port are equipped with fire mains — which supply water for firefighting — and that there is no plan to install them. Just one pier on the waterfront, a refueling pier at Naval Base Point Loma, is equipped with a fire main.

"We gotta fix it," he said Monday after an address to local military and defense industry insiders. "We've got to make it better."

Two Navy reports released in October found a series of missteps from local commanders contributed to an environment on board the Bonhomme Richard in July 2020 that caused the vessel to be particularly susceptible to fire.

A junior sailor, Seaman Apprentice Sawyer Mays, is charged by the Navy with starting the blaze. However, the Navy's investigation pointed to 36 other officials as bearing some responsibility in the loss of the ship. The fire that burned almost five days rendered the ship a total loss — it was decommissioned and towed to a scrap yard in April.

The peacetime loss of the $1.2 billion warship is among the largest in the service's history.

The service announced new firefighting training requirements for ships while in port and under maintenance in the wake of the fire, but Del Toro said infrastructure improvements won't come without money from Congress to make them.

Del Toro said he's willing to push for just that once back in Washington.

"I hope to go back to Washington, D.C., with this experience, seeing it firsthand as secretary of the Navy, and as we look at fiscal year '23, '24 and beyond, we got to make the investments that are necessary to make those piers safer and more resilient ... so that the ships and the sailors on those ships can fight fires as effectively as possible."

On Saturday, Del Toro attended the launch of the Navy oiler Harvey Milk at the General Dynamics-NASSCO shipyard. On Sunday, he made what he called "surprise" visits to five San Diego ships to inspect their damage control readiness. He said he left confident that sailors have taken the lessons of the fire to heart.

"The duty crews on those ships really have read the reports, they've learned the lessons, they really were on top of the material condition of their ships on what fire pumps were down, what fire stations were down, and it really impressed me in a significant way," Del Toro said. "It tells me they are really learning lessons learned from those two investigations and putting those lessons to practical use to try to avoid this in the future."

Del Toro declined to comment on the fate of the 36 Navy officials investigators said have some culpability in the fire; the service's Pacific Fleet-led consolidated disposition authority is currently reviewing those cases. So far, none of the Navy officers or Navy civilian personnel cited in the investigation have been relieved of their jobs, although some have retired or moved on to other positions, a Navy spokesperson previously told the Union-Tribune.