‘This is a hemisphere of promise and freedom,’ says Navy Adm. Craig Faller as he leaves SOUTHCOM 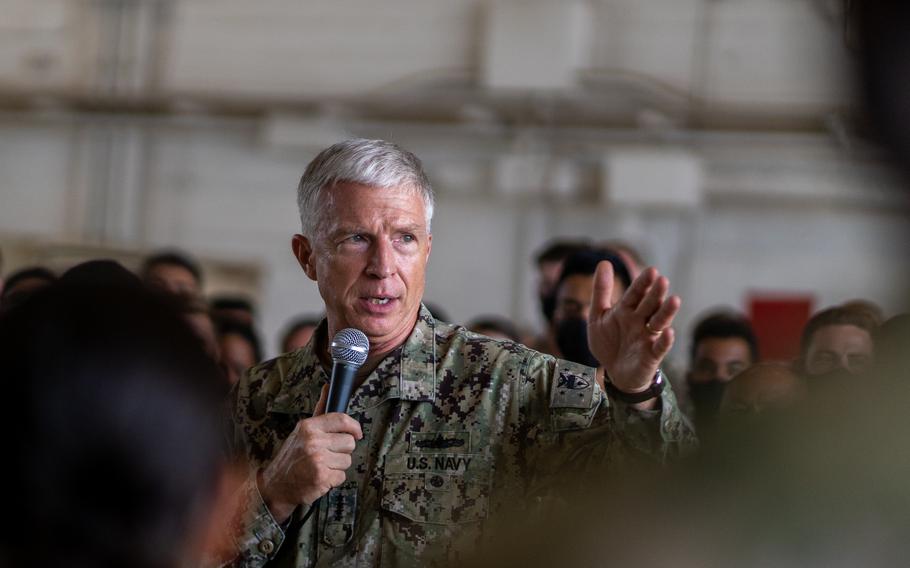 (Tribune News Service) — Barbados was still in the early stages of its battle against COVID-19. Elsewhere across the eastern Caribbean, ports were closed, curfews were in effect and in the United States, infections and deaths were surging.

Barbados Defense Force 2nd Lieutenant Dennica Edwards got the call: Her command wanted her to attend a human resources military training course in the U.S. that would require four months of her time — and flights through St. Lucia and Atlanta in the middle of a global pandemic — at the Adjutant General School at Fort Jackson, S.C.

It turned out to be one of the best decisions of her emerging military career, Edwards told U.S. Navy Adm. Craig Faller, commander of the Doral-based U.S. Southern Command, during a two-day visit to Barbados in August. She spoke of her deeper appreciation for military human resource management after benefiting from SOUTHCOM’s international military education training fund.

“It has given me increased confidence,” said Edwards, who works as the assistant staff officer in the legal department of the Barbados Defense Force. “A lot of expert personnel were instrumental in delivering the training.”

As Faller, 60, prepares to relinquish his command of SOUTHCOM on Friday, just short of three years at its helm, and retire after nearly four decades in various Navy command and operational assignments, it’s testimonials like Edwards’ the commander says he will miss.

“This gives me a lot of excitement and joy to listen to your stories,” he told Edwards and an intimate group of officers joining him in a candid roundtable discussion about U.S. military training opportunities. “But also take some tasks here back to our headquarters, our team and see how we can help further develop these kinds of programs in your force.”

A strong believer that U.S. military education training is critical to countering the influence of China and Russia among the region’s military officers, Faller in his short tenure at the command emerged as not just a likable figure among his military counterparts in the Caribbean and Latin America, but the face of American diplomacy in a hemisphere increasingly feeling forgotten and neglected by its closest, most powerful neighbor.

“As I look back on three years, the United States is a really caring nation and our government does supply foreign assistance, and security cooperation. We don’t stand up and beat our chests about it. And I don’t suggest we ever should,” Faller said. “But because we’re rather quiet about it, and we often approach it department by department, we don’t get the credit for the commitment we’ve made on the field. So there tends to be this underlying narrative, that you’re not doing things, not doing enough. It actually doesn’t really match the reality.”

Still, the Navy admiral acknowledges that given the perception, there is more that the U.S. can do.

“Just engaging with our time,” he said. “That’s key: leaders’ phone calls, video conferences, and now when we can, based on personal protections, visits. I think we need a greater investment in our time and our attention, just to listen and recognize the many, many wonderful things we have in common with the Caribbean.”

A native of Fryburg, Pa., Faller graduated from the U.S. Naval Academy in 1983 with a bachelor of science in systems engineering. He was tapped by President Donald Trump in 2018 to receive a fourth star and lead the Southern Command, responsible for military operations in Latin America and the Caribbean. He assumed command of SOUTHCOM on Nov. 26, 2018.

The visit to Barbados in early August was part of a wrap-up tour of the region that included stops in nearby Trinidad and Tobago as well as Haiti, where a devastating earthquake on Aug. 14 led Faller to oversee the deployment of helicopters, ships, transport planes and military personnel to deliver more than 300,000 pounds of humanitarian aid to hard-to-reach areas.

At every stop where the U.S. enjoys a military-to-military partnership, Faller would do just as he had since coming into the job: listen to concerns and determine whether there are opportunities to move forward in the military relationship, from education, to exercises, to military equipment where necessary. He also tried to reassure regional leaders that the U.S. is a trusted partner that wants to invest in professional military units in the hemisphere while being concerned about the threats posed by China, Russia and others.

“Our approach is not asking nations to choose,” Faller said, directing his comments to the rising role of China in the region. “It’s focusing on where we can enhance our bilateral relations with tangible things.”

While China has long had relationships with a number of countries in Latin America, it has been increasingly focused on gaining a presence in the Caribbean. Beijing’s presence can be seen in everything from infrastructure investments to agricultural projects to COVID-19 vaccines in several Caribbean nations, which have also sent members of their military to China for training.

“They recognize these countries are cash strapped, so they’re stepping up their game with enhanced professional military education, gifts, cash,” Faller said of the Chinese.

“These countries are going to have a trading relationship with China. It’s a fact,” he said. “By focusing on what we can bring in at relevant speed, and investing that time and attention and follow up, that’s going to be the approach to competition.”

The U.S. military hasn’t always enjoyed a good reputation in Latin America and the Caribbean, where regional security forces have faced allegations of human rights abuses and lacked trust among the population. Over time, the image has been changing for the better, something Faller credits to the U.S. partnership.

“It’s my true belief that the strength of the United States military is that we work hard at professionalism, staying apolitical, staying in the line of values, respect for the rule of law and human rights, diversity in our ranks,” he said. “We’ve worked really hard to be the good guys.”

An example of that influence is the response to COVID-19, which saw regional governments using their military to deliver aid packages and enforce police lockdowns.

“We’ve seen that when our partner forces, whether it’s been in the Caribbean, or Central America, have had an opportunity to do the right thing, they’ve stepped up and did the right thing,” Faller said. “Said another way, during the pandemic, when they were called in to really help go door to door, deliver care packages ... that could have ended badly if they extorted or abused the population, but that did not happen.

“These leaders, they know what their strength needs to be, what it must be and they’re committed to that and that commitment starts in the education system that we provided,” he added.

During the visits to Barbados and Trinidad, Faller met with military leaders as well as government ministers and staff from the local U.S. embassies. During the visit, the Biden administration began rolling out badly needed COVID-19 vaccines to the eastern Caribbean. SOUTHCOM had flown in field hospitals to assist with the response months earlier.

While on a tour of the hospital in Port-of-Spain, he peppered health minister Terrence Deyalsingh about the use of the tented hospital and what additional needs Southern Command could help with. Later, he said, after hearing the stories about the lives saved, the field hospital struck him as “not a donation, but it’s an investment; an investment in our shared security.”

In Barbados, the focus turned to regional security threats as security officers from the eastern Caribbean flew into Bridgetown for the first face-to-face encounter since the pandemic hit.

“It is significant that you were able to visit us here in Barbados,” Col. Glyne Grannum, the outgoing chief of staff of the Barbados Defense Force, told Faller while expressing gratitude for SOUTHCOM’s assistance in developing operational readiness and capacity. “There’s a whole ocean, a Pandora’s box of scenarios that we need to be able to prepare and plan for, and ready our forces. I am absolutely confident in the partnership between ourselves and Southern Command.”

Among the achievements Faller said he’s most proud of is the day-to-day contact that had been strengthened across the eastern Caribbean under his leadership, and the relationships across the regional security systems, and advancements in the promotion of training for women like Edwards.

As he wraps up his tour of duty, Faller said he wishes his successor, Richardson, well. He has garnered an affection for the region, especially the Caribbean, and is already thinking of where he and his wife Martha can visit. It doesn’t need to have a military, he said with a chuckle.

“This hemisphere is a hemisphere of promise and freedom,” he said. “The people were so aligned with the United States, you feel like you’re talking to your sister and brother next door in the neighborhood. ... The friendships and the trust that we’ve made and built, I’ll miss those.”

If there is parting advice he would give to members of Congress, who control the purse strings of U.S. assistance to the region, it would be simply to “invest time” in the area, Faller said.

“Visit once COVID conditions allow. Make it a priority for your [congressional delegations] and staff to come see firsthand and in the application of the necessary congressional oversight, ensure that consistency, and a long-term view as a key component,” he added. “The region needs more advocates to talk about the promise and the challenges, and the threat to that promise. They are real, the competition with China, there is only one way it can end and democracy has to win.”