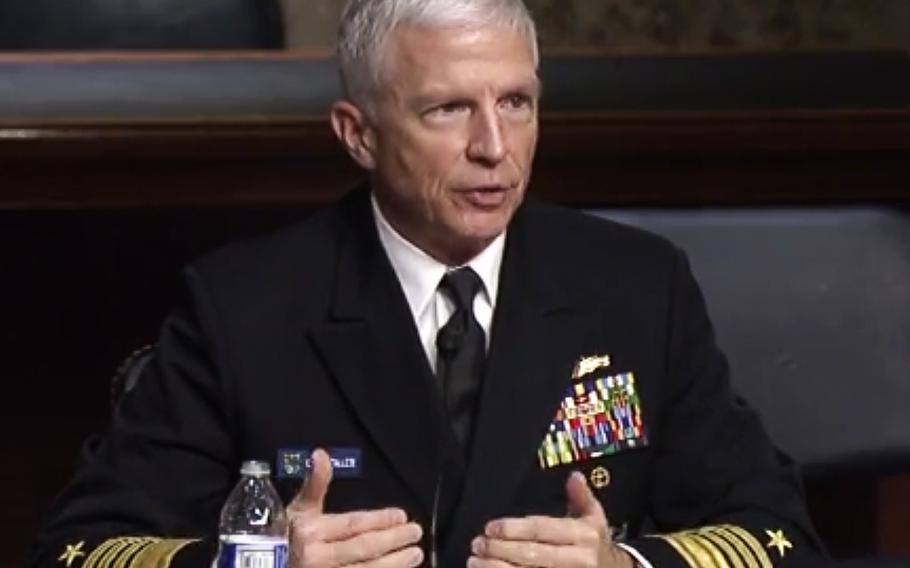 In a screen capture from a Senate Armed Services Committee video, SOUTHCOM commander Adm. Craig Faller testifies at a hearing on March 16, 2021. ()

The U.S. military needs more resources in Central and South America and the Arctic region to counter increasing Chinese and Russian activities in those areas, the top U.S. military officers in charge of operations in the Western Hemisphere testified Tuesday.

The commanders of U.S. Northern Command and U.S. Southern Command told the Senate Armed Services Committee that China and Russia have increased efforts to assert influence in the Western Hemisphere and test American resolve amid the ongoing coronavirus pandemic. Both of the primary power competitors for the U.S. have long sought to increase their global influence and have grown increasingly emboldened, Adm. Craig Faller, the SOUTHCOM commander, said Tuesday.

Faller said the Chinese are using coronavirus pandemic aid as leverage to persuade countries – including those in Latin America – to partner with them on infrastructure projects such as updated wireless network capabilities. The admiral labeled it “mask and vaccine diplomacy.”

“The conditions that the pandemic has caused in Latin America and the Caribbean rival those of the Great Depression here in the United States,” Faller told senators in a hearing alongside NORTHCOM’s commander, Air Force Gen. Glen VanHerck. “China has moved in particularly heavy handed … and they’re using vaccines to leverage deals for their 5G, and they're using it to drive a wedge between some nations in the region.”

Faller told senators that U.S. influence in his region was “eroding,” telling them a colleague from a country within the SOUTHCOM area of responsibility that he spoke to recently compared the region to a lifeboat “sinking in violence and … sinking in Chinese influence.”

“What I hear from our partner is: ‘We know that the United States military is the best, [and] we want to partner with you. But, we’re drowning, and we need a LifeRing, and we’re going to take the LifeRing from whoever throws it,’” including the Chinese, Faller said.

To remain the top power in the region, the United States must be able to provide partner nations critical military assistance and other aid, but he warned he needed more intelligence, surveillance and reconnaissance assets and security forces.

Faller and SOUTHCOM commanders before him have warned for years that the command was underfunded and especially lacking in intelligence, surveillance and reconnaissance resources. The admiral said his budget for those assets was cut 46% for fiscal year 2021, leaving him with critical gaps in tracking the drug trade run by transnational criminal organizations and other threats, including power rivals’ activities in the region.

“Our understanding of what our competitors are up to – Russia, China, Iran – a lot gets left on the table, and that is contributing to violence and driving instability,” Faller said. “We’ve got to be on the field to compete.”

Meanwhile, VanHerck issued a similar warning about the American military presence in the Arctic, where melting ice has provided new access to natural resources and potential future shipping lanes, at least in part sparking a competition for influence in the far north.

“We are lagging behind,” he said. “We’re in competition … and to be competitive with Russia and China, specifically in the Arctic, you have to be on the field. And, so it's crucial that we do that and we continue producing capabilities that will allow us to be in the Arctic.”

The Army on Tuesday also issued its own Arctic strategy, which calls for increased training in the region, the establishment of a new two-star headquarters to oversee Arctic operations and to equip and train some combat brigades to fight in the region.

VanHerck endorsed the need for a port north of Dutch Harbor, Alaska, to provide U.S. ships fuel to ensure a more persistent presence to compete with growing Russian and Chinese naval presence in the Arctic region. VanHerck said he had no preference about which military service would run such a port or where it should be located. However, the Navy has proposed building a base near Nome, Alaska.

VanHerck said it was important to increase the United States’ inventory of two polar icebreakers quickly, to compete with Russia’s about 40. The Coast Guard plans to build six, with the first scheduled for completion in 2023. China, too, has said it plans to build several icebreakers.

The Coast Guard ships would ensure the U.S. can send cutters and “potentially destroyers or maybe cruisers” into the region, VanHerck said.

Though Defense Secretary Lloyd Austin and Pentagon leaders have assessed China poses the most serious threat now to U.S. global influence, VanHerck warned Tuesday that Russia was the most viable military threat to the U.S. homeland in 2021.

He said NORTHCOM reported more Russian military flights – often formations with multiple bombers and fighter jets – near Alaska’s coast in 2020 than “in any year since the end of the Cold War,” some 30 years ago.