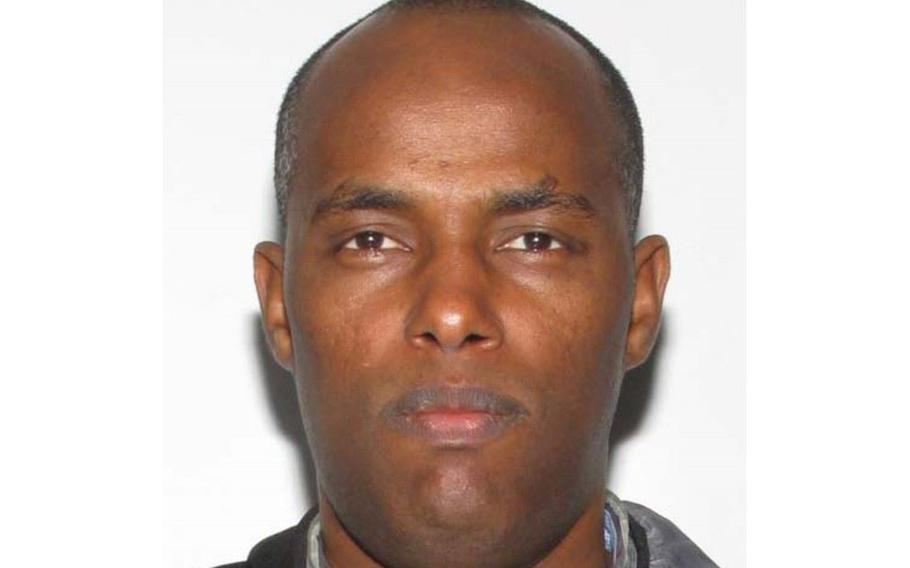 Fantahun Girma Woldesenbet, a Navy hospital corpsman who shot and wounded two fellow sailors before Fort Detrick security forces shot and killed him at the nearby Army base, had been assigned to a medical research center in Maryland for nearly two years. A shooting at a Frederick business park in April where a Fort Detrick sailor reportedly shot two fellow service members was targeted, Frederick police said Wednesday. (City of Frederick, Md.)

FREDERICK, Md. (Tribune News Service) — A shooting at a Frederick business park in April where a Fort Detrick sailor reportedly shot two fellow service members was targeted, Frederick police said Wednesday. But key questions remain unanswered in that case and the subsequent fatal shooting of the gunman by civilian police at Fort Detrick.

The news that the shooting was targeted, sent to the News-Post Wednesday by the Frederick Police Department, marks the first substantial update to the media since April. Answers as to motive and details of the relationship between the shooter and victims remains unknown.

On April 6, Fantahun Girma Woldesenbet, a 38-year-old Navy Hospital Corpsman stationed at Fort Detrick, reportedly shot two fellow service members with a rifle in the 8400 block of Progress Drive around 8:20 a.m., according to police.

Injured were Seaman Casey Nutt, 26, of Germantown, and Petty Officer 1st Class Carlos Portugal, 36, of Frederick. The Naval Medical Research Center through spokesman Tommy Lamkin said Wednesday the victims and Woldesenbet were in the same department and worked together closely on a routine basis. Lamkin could not comment on the medical status of service members, but confirmed Portugal was no longer hospitalized. Nutt was released the day of the shooting.

"The Frederick Police Department typically does not release investigative information while cases are open," Lt. Jon Holler, commander of FPD's Criminal Investigations Division, said in a written statement. "However, due to the intense public scrutiny of this case we can confirm that detectives determined this event to be a targeted incident and was not a random shooting. However, we cannot comment more specifically to the motives of Mr. Woldesenbet. The FPD has worked in concert with the FBI and other partnering agencies to assist them with their investigation. However, as the investigation is still ongoing, it would be inappropriate to comment further."

Nutt and Portugal were working inside a warehouse rented and used for storage by the Naval Medical Research Center, Biological Defense Research Directorate, according to the Frederick Police Department. Woldesenbet, of the 100 block of Willowdale Drive in Frederick, reportedly fired upon Nutt and Portugal then immediately drove to Fort Detrick, where the post's civilian police fatally shot him after he reportedly displayed a gun.

Prior to the shooting, Woldesenbet didn't appear to show any signs of what was to come.

"There were no visible indications or changes in behavior that would have alerted us to his actions," Lamkin wrote in an email. "We are not aware of any issues in his past."

Joy Jiras, an FBI Baltimore spokeswoman, said Wednesday the Baltimore Field Office investigated the officer-involved shooting at Fort Detrick and turned its findings over to the U.S. Attorney's Office for the District of Maryland. She wrote in an email the FBI was not in a position to answer other questions.

The FBI letter cites the denial as pursuant to the Freedom of Information Act.

The News-Post posed further questions to the FBI and FPD, including queries into Woldesenbet's relationship to Nutt and Portugal, a motive, how Woldesenbet obtained the firearm, and more queries. The agencies did not provide answers to those questions.

Also unknown are the details of the exchange between Woldesenbet and Fort Detrick officials at the Nallin Farm Gate, where he entered in his vehicle before driving roughly one-half mile onto post and displaying a gun.

Fort Detrick, through spokeswoman Lanessa Hill, declined to expand on any security changes that may have been made since the incident.

"That day [April 6] demonstrated the effectiveness of a coordinated response by the Fort Detrick police, local law enforcement agencies, and emergency services to contain a threat," Hill wrote in an email Wednesday. "At Fort Detrick, the safety of our employees and residents is a top priority and steps are taken every day to ensure this. Releasing specific details about force protection presents a risk to our operational security."