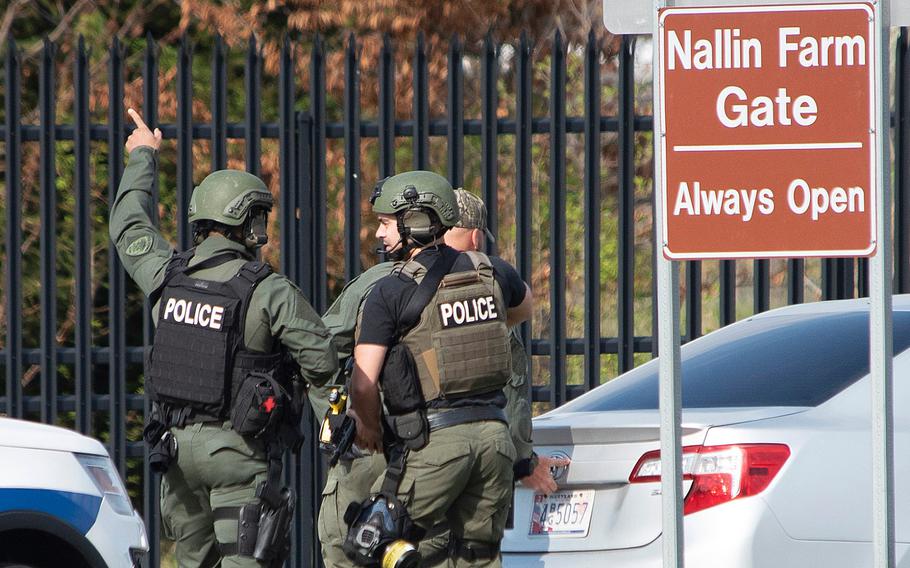 Members of the Frederick Police Department Special Response Team prepare to enter Fort Detrick at the Nallin Farm Gate following a shooting Tuesday, April 6, 2021, in northeast Frederick, Md. Authorities said a Navy medic shot and critically wounded two people at a Maryland business park before fleeing to the Army base, where he was shot and killed. (Graham Cullen, The Frederick News-Post/TNS)

Members of the Frederick Police Department Special Response Team prepare to enter Fort Detrick at the Nallin Farm Gate following a shooting Tuesday, April 6, 2021, in northeast Frederick, Md. Authorities said a Navy medic shot and critically wounded two people at a Maryland business park before fleeing to the Army base, where he was shot and killed. (Graham Cullen, The Frederick News-Post/TNS) 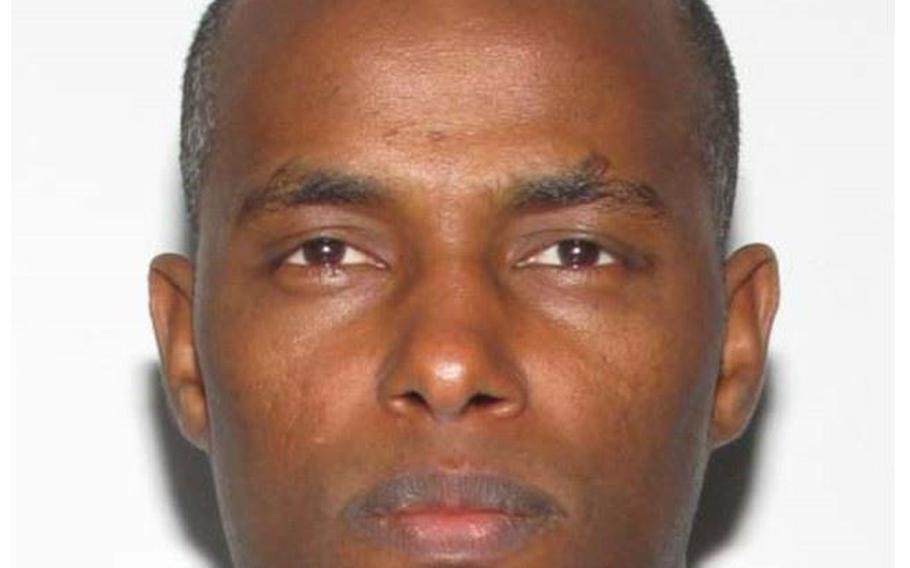 Petty Officer 3rd Class Fantahun Woldesenbet shot and critically wounded two sailors working at a site outside of Fort Detrick, Md., on Tuesday morning before military police shot and killed him for breaching a gate at the Army base and pulling out a weapon.

Military and civilian law enforcement did not say whether 38-year-old Woldesenbet, a Navy hospital corpsman who was assigned to Fort Detrick, worked at the overflow site in Frederick where he opened fire on fellow sailors, nor did they speculate on the motive behind the shooting.

Woldesenbet entered the Navy facility, located in the Riverside Tech Park at about 8:20 a.m. armed with a rifle, said Chief Jason Lando of the Frederick Police Department. Two male sailors in that facility were critically wounded and flown by helicopter to the University of Maryland Medical Center’s Shock Trauma Center in Baltimore. Their names were not released Tuesday.

Woldesenbet fled the scene in a vehicle and Frederick police issued an alert about him, Lando said.

About 25 minutes later, Woldesenbet was stopped just outside the Nallin Gate, according to Fort Detrick. Before he could be searched, he sped past the gate and drove about a 1/2 mile onto the base before he was stopped in a parking lot by the Fort Detrick Quick Reaction Force, said Brig. Gen. Michael Talley, commander of the base.

Woldesenbet then brandished a weapon and was shot by military police, Talley said. Emergency medical personnel worked for about 20 minutes before Woldesenbet was pronounced dead at the scene.

“There were no other injuries on Fort Detrick,” Talley said. “It was … a coordinated effort between our local police force here and Fort Detrick, all being executed within minutes, that absolutely led to further life-saving steps and potentially injury prevention.”

Woldesenbet, who is from Virginia, enlisted in the Navy in September 2012, according to his official Navy service record. He obtained the rank of E-4 in June 2017 while serving with Navy Medicine Readiness and Training Command in Bremerton, Wash.

He had been assigned to the Naval Medical Research Center in Frederick since Aug. 5, 2019. The service record listed four awards for the sailor and no overseas deployments.

Talley did not say how long Woldesenbet had been assigned to Fort Detrick or what his official job was, but online records show the sailor graduated in December 2019 from the Uniformed Services university as a medical lab technician.

Authorities are looking into possible relationships between the suspect and the victims and why the shooter began at the off-base Navy facility and then traveled the four miles toward the base, Talley said.

“Right now, we’d like to see the investigation develop before we speculate on that,” he said.

While officials did not say whether other sailors were working in the facility at the time of the shooting, the base is offering a number of resources to those impacted by Tuesday’s incident. A behavioral health “sprint team” traveled to the base from Walter Reed National Military Medical Center in Bethesda, Md., to provide support, Talley said.

He said the base had been training for an active-shooter scenario similar to this and expected to conduct a full rehearsal in about a week.

“This situation that we’re in now, which has become all too often, … we were as prepared as we could be for something like this and all procedures, all protocols were followed,” Talley said