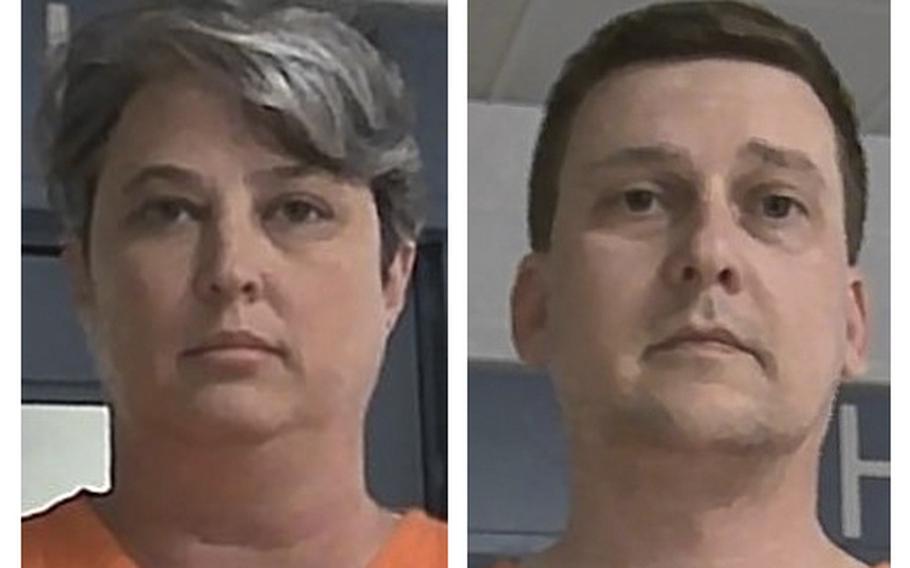 An Annapolis, Md., teacher accused of plotting with her husband to try to sell nuclear submarine secrets to a foreign country will remain behind bars pending trial, a federal judge ruled Thursday, to ensure she does not try to flee the country.

U.S. Magistrate Judge Robert Trumble issued a written order a day after a lengthy hearing in which an FBI agent testified that Diana Toebbe, 45, served as a "lookout" for her husband as he left small data cards full of government secrets at "dead drop" locations, hidden inside a peanut butter sandwich in one instance, and an adhesive-bandage wrapper and Dentyne gum package in others.

The judge called the evidence against Diana Toebbe "strong" and said she poses a flight risk, noting her previous text messages with her husband in 2019 and 2020 in which she appeared to express a strong desire to leave the country quickly.

Friends and students of Toebbe, who taught at the private Key School in the Maryland state capital, have said they were shocked to find out that the person they knew as a knitting and martial arts enthusiast had allegedly spent years planning a multimillion dollar sale of U.S. government secrets.

Toebbe and her husband pleaded not guilty at Wednesday's hearing, but only Diana sought to be released from jail, hoping she could stay at her home with their two children while she awaits trial on charges that carry a potential life prison sentence.

The husband and wife were arrested Oct. 9 in West Virginia, on charges that they conspired to share "restricted data" under the Atomic Energy Act.

Jonathan Toebbe, 42, is a nuclear engineer with the Navy. Authorities allege that, with his wife's help, he offered to sell government secrets about nuclear propulsion systems on submarines to an unidentified foreign country. The FBI learned of the alleged plot and conducted an undercover sting operation to gather evidence against the Toebbes.

Diana Toebbe's lawyer, Edward MacMahon, said in court Wednesday that most of the evidence the government has offered is against her husband, not her.

"She's not going to flee the United States and leave her children here. That's not going to happen," MacMahon said. "The government really doesn't have much of a case against her."

He suggested that any talk of her leaving the country was just common liberal griping about Donald Trump's presidency, and not evidence of a nefarious criminal scheme.

The FBI said at the hearing that they have yet to recover thousands of the secret documents that the Toebbes allegedly planned to sell as part of a scheme to make up to $5 million in cryptocurrency. Agents also have not found the $100,000 in cryptocurrency they say they sent to Jonathan Toebbe as part of the undercover operation to identify and arrest him.

The case began in December, when a foreign government that authorities have refused to identify gave the FBI a letter proposing to sell U.S. government secrets in exchange for money. The letter, which had been sent months earlier, said that if the foreign country didn't respond by the end of the year, the author would try to find another buyer for the documents.

According to court documents and testimony, the FBI then set up an undercover operation, trading encrypted emails with the person offering the material and arranging a series of "dead drop" exchanges for which the undercover agent, posing as a foreign intelligence service handler, paid him in cryptocurrency.