by
Devlin Barrett and Martin Weil
• The Washington Post • October 10, 2021 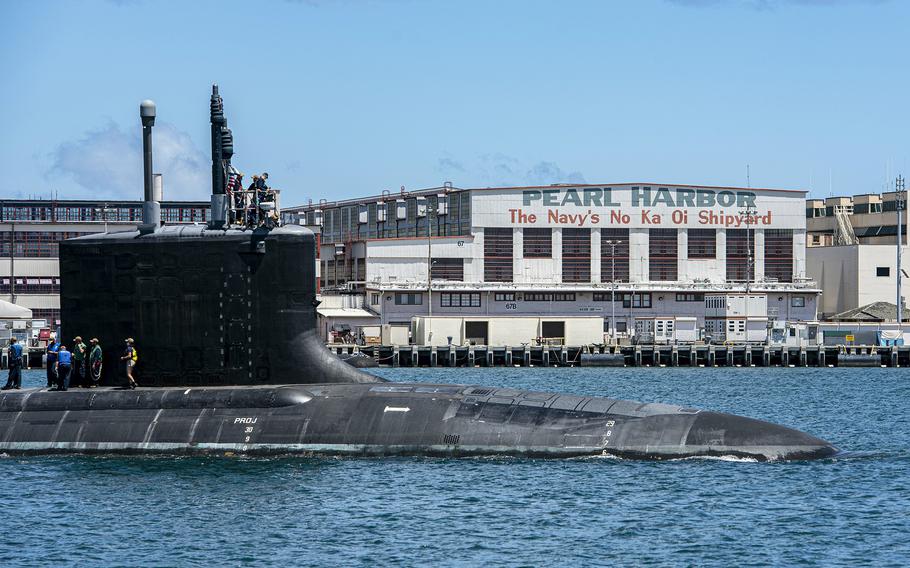 A Virginia-class fast-attack submarine departs Pearl Harbor Naval Shipyard in Hawaii, May 10, 2020. A Navy nuclear engineer and his wife have been charged with repeatedly trying to pass along secrets on the design, operations and performance of Virginia-class nuclear submarine reactors, according to court documents. (Amanda Gray/U.S. Navy)

A Navy nuclear engineer and his wife have been charged with repeatedly trying to pass secrets about U.S. nuclear submarines to a foreign country, in an alleged espionage plot discovered by the FBI, according to court documents.

Authorities say Jonathan Toebbe, who has a top-secret clearance, “has passed, and continues to pass, Restricted Data as defined by the Atomic Energy Act ... to a foreign government ... with the witting assistance of his spouse, Diana Toebbe,” according to a criminal complaint filed in West Virginia and unsealed Sunday.

The court papers say that in December 2020, an FBI official received a package that had been sent to the foreign country containing U.S. Navy documents, a letter and instructions for how to conduct encrypted communications with the person offering the information.

The letter in the package said: “Please forward this letter to your military intelligence agency. I believe this information will be of great value to your nation. This is not a hoax.”

The FBI then posed as spies for the foreign country and began communicating by email with the person, suggesting a meeting, but the person said both options were too risky, noting that they were risking their life in offering the information to the foreign government.

The court papers show an email conversation that began nearly a year ago in which Toebbe allegedly discussed espionage tradecraft and payments with someone he thought was a foreign spy but was in fact an undercover FBI agent.

The emails show that at first Toebbe was extremely cautious but that he came to trust the undercover agent in part because of the money he was paid and because the FBI arranged to “signal” Toebbe from the country’s embassy in Washington over the Memorial Day weekend. The papers do not describe how the FBI was able to arrange such a signal.

Toebbe allegedly asked for $100,000 in cryptocurrency, saying “I understand this is a large request. However, please remember I am risking my life for your benefit and I have taken the first step. Please help me trust you fully.”

The undercover FBI agent persuaded Toebbe to conduct a “dead drop” of information in late June in West Virginia’s Jefferson County after Toebbe received about $10,000 worth of cryptocurrency, according to the charging papers.

The FBI later recovered the package Toebbe left behind, and inside found a 16-gigabyte data card. The card, authorities said, “was wrapped in plastic and placed between two slices of bread on a half of a peanut butter sandwich. The half sandwich was housed inside of a plastic bag.”

Authorities said another payment of $20,000 followed, and the dead drops continued, with data cards hidden in a Band-Aid wrapper and a chewing gum package.

His wife, Diana Toebbe, appeared to be “acting as a lookout” when he dropped off the material, according to the court filing.

After receiving $70,000 in cryptocurrency, Toebbe provided a decryption key to read the contents of one of the data cards, officials said.

Toebbe and his wife were charged with conspiracy to communicate restricted data and communication of restricted data. The couple were arrested Saturday in West Virginia and are due to make their first court appearance Tuesday.

The information Toebbe turned over included details of the design, operations and performance of Virginia-class nuclear submarine reactors, according to court papers.

Virginia-class subs carry cruise missiles and incorporate “the latest in stealth, intelligence-gathering, and weapons system technology,” according to court papers. Each costs about $3 billion to build.

Attorney General Merrick Garland said the charges show “a plot to transmit information relating to the design of our nuclear submarines to a foreign nation.”

The court papers do not identify the foreign country that Toebbe allegedly thought was buying the secrets, nor do they explain how the FBI came to possess in December 2020 the package Toebbe first sent to the embassy, but the filing notes the postmark on the package was many months earlier — April 1, 2020.

Toebbe, 42, has worked since 2012 for the Navy. He and his wife, 45, live in Annapolis, where she works as a high school humanities teacher. They were arrested after they allegedly placed another data card at a secret dead-drop site. After the arrest, their home was searched by FBI agents and Navy investigators, according to officials.

In total, Toebbe allegedly provided thousands of pages of documents, and officials said his espionage ambitions had been building for years.

“The information was slowly and carefully collected over several years in the normal course of my job to avoid attracting attention and smuggled past security checkpoints a few pages at a time,” Toebbe allegedly wrote to the foreign country, adding that he no longer had access to classified data but could answer any technical questions the foreign country might have.

He also allegedly wrote that he hoped the foreign government would be able to extract him and his family if he was ever discovered, adding “we have passports and cash set aside for this purpose.”