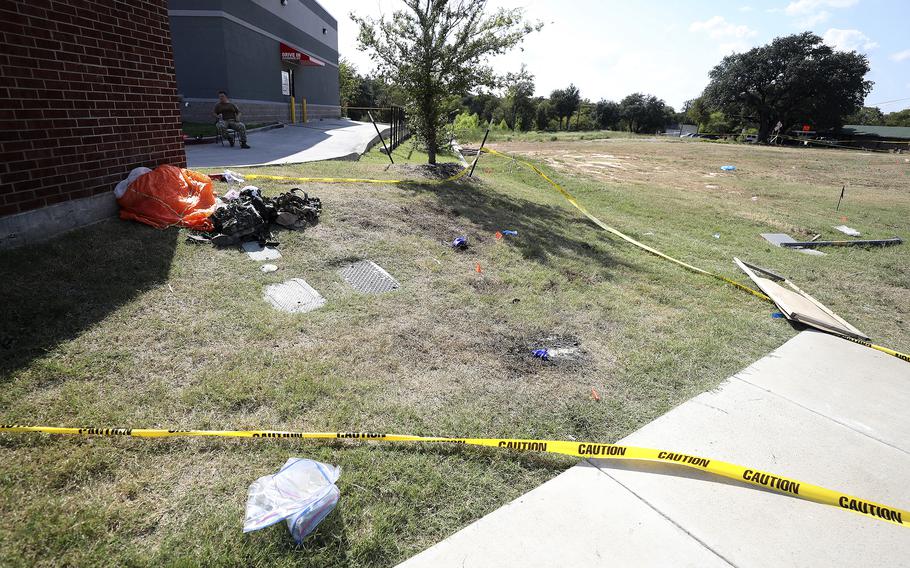 A parachute and other items remain outside an Ole Donut where one pilot landed after ejecting from a military training jet before it crashed Sept. 19, 2021, in Lake Worth, Texas. (Amanda McCoy, Fort Worth Star-Telegram/AP)

(Tribune News Service) — The U.S. Navy has finished the environmental cleanup following the crash of a training jet in Lake Worth, the Navy said in a news release.

The jet crashed into a back yard in a Lake Worth neighborhood Sept. 19, injuring two pilots and three residents and severely damaging homes.

A spokesperson for the Navy said in an email Friday the student pilot was in fair condition and he was continuing to receive medical care. Residents in the area said they saw the student pilot’s suit catch fire when he hit a power line while parachuting from the jet.

The instructor pilot was released from the hospital Sept. 20.

The crash led to environmental concerns and week and a half cleanup process to cleanse soil of contaminates like jet fuel and recovery of debris that will be used to determine the cause of the crash. Cleanup was completed Sept. 29, according to the news release.

A Navy On-Scene Coordinator team removed contaminated soil from the area, ran tests on the remaining earth to confirm all contaminates were cleaned up and backfilled the land with clean soil, according to the news release.

Debris from the training jet, a T-45C Goshawk, stretched at least about a half mile from the crash site.

A photograph included in the release shows the back yard in which the jet crashed cleaned of all debris and with new grass placed over areas that were excavated during the cleanup.

Anyone who finds additional debris from the crash is asked to contact the Lake Worth Police Department and avoid touching any debris for safety reasons.

The Navy said it will not release a cause for the crash until an investigation is complete, a process that could take months.