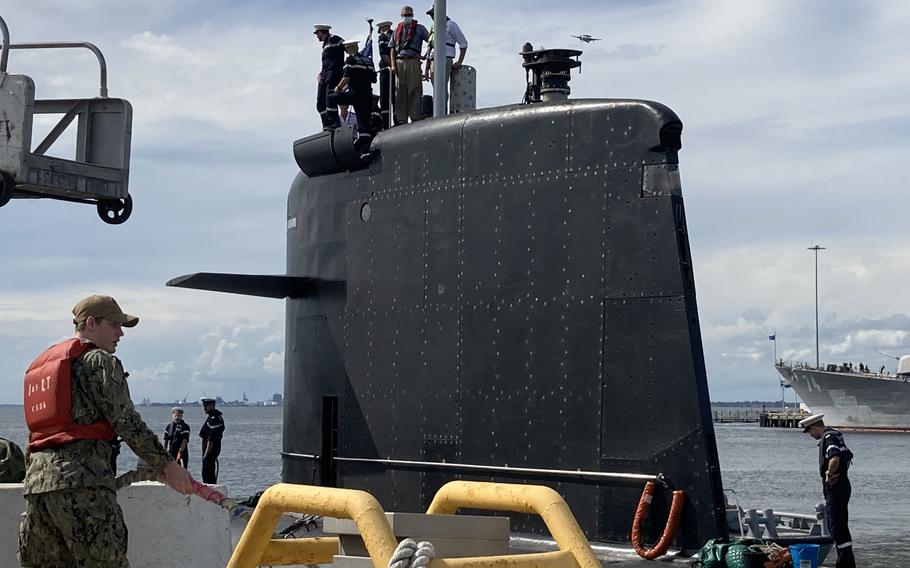 (Tribune News Service) — The first time the French Navy ventured into Hampton Roads, it turned the tide of the American Revolution. The visit of the submarine Améthyste at Naval Station Norfolk is somewhat more relaxed.

The plan is for the USS John Warner to host a barbeque so its crew and the French sailors can get to know each other.

There will be tours of the French submarine for the Americans, and tours of the Virginia-class John Warner for the French — and not just what most visitors get, these will be professional and largely classified consultations.

France and the United States are two of only six nations with nuclear submarines, and while NATO exercises can mean a change to practice operating together, port visits matter too.

But plans to add a seventh member to the club — Australia — angered France when the United States announced them the day before Améthyste’s arrival. The agreement will kill a deal France made to develop a new submarine for the Australians.

French submarines visit Norfolk every three years or so, so the Améthyste’s stop here is a rare chance for each side to get to know the other better.

“It makes ties between allies stronger, and 1781 shows how important allies are,” said Lt. Cmdr. Jeff Vandenengel, executive officer of the John Warner.

On its way to Norfolk, Améthyste passed under the waters where the Battle of the Capes was fought Sept. 5, 1781, he said.

On that day, it took about 2½ hours for French Admiral Francois Joseph Paul, Marquis de Grasse Tilly and a French fleet of 37 ships, including 28 large ships-of-the-line, to push combined British fleet of 19 warships out of Chesapeake Bay.

When the two fleets opened fire at 4:15 p.m., the stakes were control of the bay, and particularly whether George Washington could bring the reinforcing troops and supplies he needed for looming battle with British forces at Yorktown.

Control of the bay also meant that when the British fleets came back a few days, this time with reinforcements for Lt. General Charles Cornwallis and his besieged army, they were unable to enter the bay and proceed to Yorktown.

Cornwallis never got the additional troops he needed when fighting erupted in late September. After more than two weeks of conflict, the British surrendered on Oct. 17, 1781, ending the war with victory for American independence.