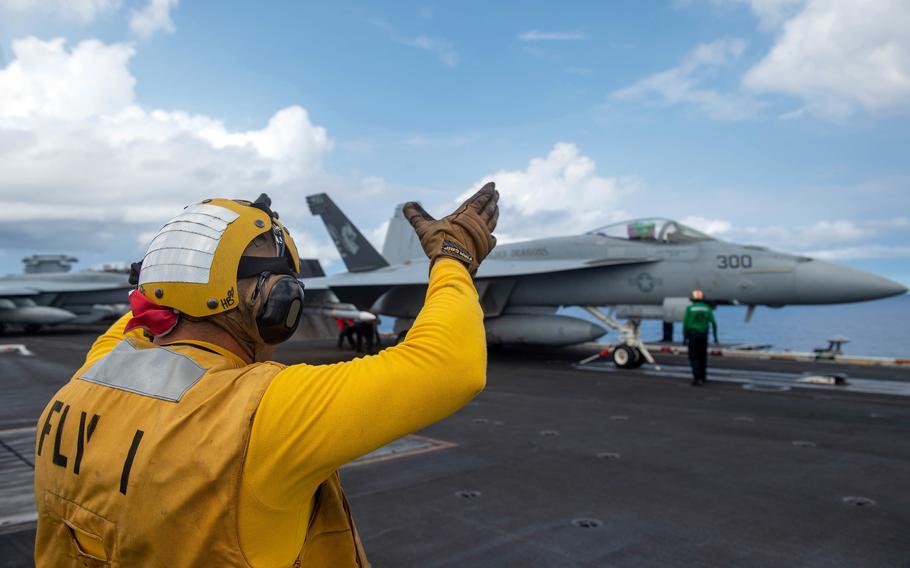 A Navy aircraft carrier strike group and a destroyer steamed separately through the South China Sea on Wednesday, just days after China imposed a law requiring foreign vessels to give notice before entering waters claimed by Beijing.

The guided-missile destroyer USS Benfold “asserted navigation rights and freedoms” within 12 nautical miles of Mischief Reef in the Spratly Islands, according to a 7th Fleet news release Wednesday.

Meanwhile, the USS Carl Vinson and its strike group were training elsewhere in the region, according to the Navy.

The entire Spratly chain is claimed by China, Vietnam and Taiwan; the Philippines, Malaysia and Brunei also claim portions of them.

Neither warship provided notice to any country with claims in the South China Sea, 7th Fleet spokesman Lt. Mark Langford told Stars and Stripes in an email Wednesday.

Also Wednesday, the Chinese military issued a statement saying the Benfold entered the area without permission and that it had tracked, monitored and warned off the destroyer.

The statement, attributed to Col. Tian Junli of the Southern Theater Command, said Beijing has “indisputable sovereignty” over the islands. It also called the U.S. a “security risk maker in the South China Sea” and the “biggest destroyer” of peace and regional stability.

The 7th Fleet responded with its own statement Wednesday afternoon, saying the operation abided by international law. It called Beijing’s statement “the latest in a long string” of actions intended to misrepresent the Navy’s operations and “assert excessive and illegitimate maritime claims.”

China has reclaimed land and built military infrastructure in the Spratlys since 2014, according to the Center for Strategic and International Studies Asia Maritime Transparency Initiative. Mischief Reef is one island China has improved and occupies.

“The United States challenges excessive maritime claims without regard to the nation asserting them,” the statement said.

In late July the Benfold passed through the Taiwan Strait, another practice that China routinely condemns.

“Carrier operations in the South China Sea are not new or unusual,” she wrote. “Our Navy has flown, sailed, and operated throughout the Indo-Pacific region in accordance with international law for more than 75 years and will continue to do so.”

The Carl Vinson carries the Navy’s “air wing of the future,” aircraft that include the F-35C Lighting II stealth fighters and CMV-22B Osprey tiltrotor aircraft.

China’s law will not hinder U.S. military activities in the region, according to Pentagon spokespeople, who said Sept 1. that the Navy would sail “wherever international law allows.”

Beijing’s claims in the South China Sea are outlined by the “nine-dash line,” a demarcation adopted from a 1947 Chinese map. In 2016, a United Nations tribunal declared some of those claims unlawful under the Convention on the Law of the Sea.