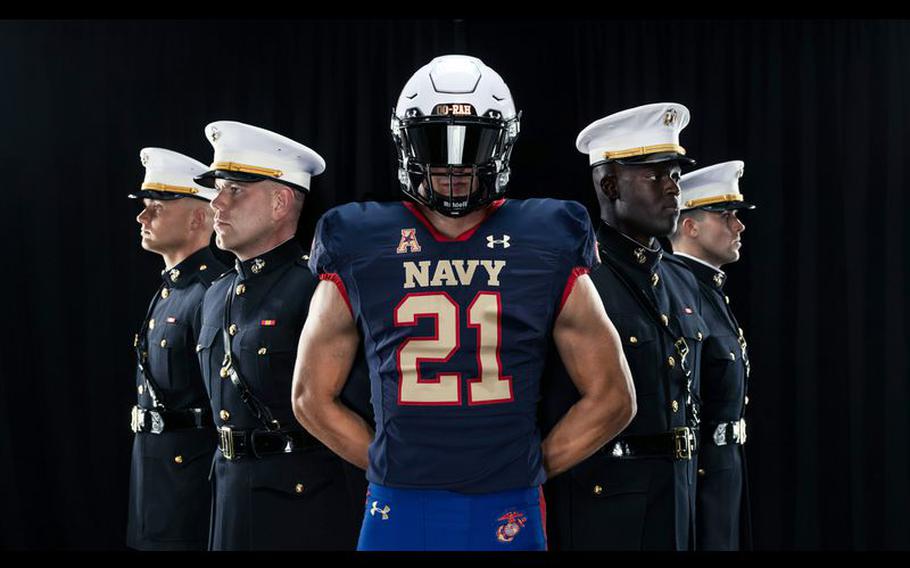 Navy Athletics and Under Armour have unveiled a special Marine Corps-themed uniform the Navy football team will wear for the Sept. 11 game against Air Force at Navy-Marine Corps Memorial Stadium. (James Quantz Jr.)

Unveiled Monday morning, this Navy uniform displays elements of the Marine Corps dress blues uniform and is symbolic of Marines, both enlisted and officers. It was created by Under Armour designer Adam Dougherty in consultation with Navy associate athletic director for equipment operations Greg Morgenthaler with the design process taking a total of 18 months.

In 2010, Navy wore a specialty uniform for the Army game that honored the Marine Corps. Those uniforms, which were based off the Marine dress uniforms and featured a red blood stripe on the pants, were created by Nike.

Morgenthaler said Navy has wanted to do another alternate uniform recognizing the Marine Corps ever since signing a new apparel contract with Baltimore-based Under Armour in 2014.

“We’ve had this idea in the back pocket for as long as we’ve been with Under Armour,” said Morgenthaler, noting that Navy athletic director Chet Gladchuk and coach Ken Niumatalolo loved the concept.

Air Force will also wear alternate uniforms for the game against Navy, being played on the 20th anniversary of the Sept. 11, 2001, terrorist attacks on the United States. Normally, the Air Force-Navy game is played the first weekend in October.

The Marine Corps is the only uniform in the U.S. military designated to include the red, white and blue colors of the American flag. The distinctive dress-blue uniform represents the values by which Marines live and has origins dating back to the American Revolution.

Navy’s uniforms include many elements and motifs that honor the proud and storied legacy of the Marine Corps with the emblem of the Eagle, Globe and Anchor (EGA) appearing on both shoulders, the left front pant and on the left side of the helmet.

Morgenthaler is particularly proud of the helmet, which he personally designed. “I worked very hard to make it look like the Marine cover,” he said.

The Eagle, Globe and Anchor has represented the title every Marine has earned since 1868. The eagle represents the proud nation Marines defend and stands at the ready with our nation’s coastlines in sight and the entire world within reach of its outstretched wings.

The globe represents the Marine Corps’ worldwide presence, impact and reputation as a fighting force that wins on behalf of our nation’s people and progress. The anchor points both to the Marine Corps naval heritage and its ability to access any battleground across any coastline in the world.

The quatrefoil is an interwoven braid in the shape of a cross of figure eights found on top of the Marine officers’ barracks covers. Officially, the quatrefoil first became an authorized part of the uniform in 1859. The quatrefoil was the fashionable military style of the era. Popular belief tells us the quatrefoil was worn on the caps of Marines fighting on the decks of ships to be easily recognized by the Marine sharpshooters located above in the ship’s rigging.

“We used elements of the Marine Corps with the colors of Navy. I think that is the best way to explain it,” Morgenthaler said.

Naval Academy midshipmen interested in becoming a Marine have the opportunity to participate in programs that provide further exposure to the Marine Corps. During the summer of their junior year, midshipmen learn about the corps during “Marine Week” of professional training.

Those considering the Marine Corps must attend Leatherneck training the summer of their senior year. Leatherneck is a four-week training evolution in Quantico, Virginia, during which midshipmen are evaluated on leadership, physical training and military skills.

As seniors, midshipmen may choose to compete for selection into the Marine Corps as a ground officer, cyberspace officer, or pilot. After graduation, all Marine Corps officers attend The Basic School in Quantico to become more proficient in the professional knowledge and skills necessary to be effective in leading Marines.

There are more than 70 active-duty officers and senior enlisted Marines that make up the Marine Detachment assigned to the Naval Academy. Approximately 25% of Naval Academy graduates each year will commission into the Marine Corps through a competitive selection process, while close to 50% of the football players choose the Marine Corps as a service assignment.