Navy has a history of blaming sailors for its institutional failings 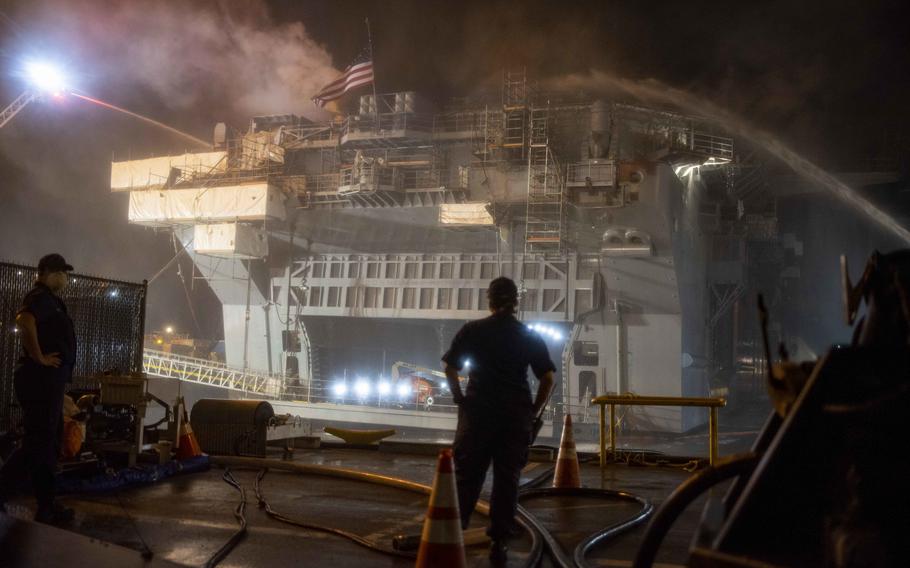 A young sailor who allegedly hated the Navy after being dropped from SEAL training and spurned by his sailor girlfriend — enough to torch the Bonhomme Richard amphibious landing ship — is the latest in a line of those the service has targeted for blame in the wake of a high-profile disaster. In some past cases, the Navy’s initial findings have crumbled under further investigation.

(Tribune News Service) — A young sailor who allegedly hated the Navy after being dropped from SEAL training and spurned by his sailor girlfriend — enough to torch the Bonhomme Richard amphibious landing ship — is the latest in a line of those the service has targeted for blame in the wake of a high-profile disaster.

In some past cases, the Navy’s initial findings have crumbled under further investigation.

The Navy announced July 29 that a junior sailor was being charged with aggravated arson and hazarding a vessel in connection with the devastating July 2020 fire on the amphibious assault ship Bonhomme Richard. While the service did not initially name the sailor, a recently-unsealed federal affidavit revealed his name is Ryan Mays, 20. He was 19 when the fire on the ship erupted.

In the affidavit unsealed Tuesday, and a second unsealed Wednesday, a Naval Criminal Investigative Service agent argues there was enough evidence at the time — in September and August 2020, respectively — to search Mays’ barracks room, truck, cell phone and email accounts. The agent’s affidavit says that Mays, who had recently washed out of Navy SEAL training and had recently broke up with his girlfriend, was angry enough at the Navy to start a fire in the lower vehicle storage area of the vessel.

A close reading of the affidavit reveals the evidence against Mays, at least at the time it was written, wasn’t very convincing, said military attorney Brian Ferguson. Ferguson, who is based in Texas, is also a judge advocate general in the Air Force Reserve but spoke to the Union-Tribune in his capacity as a civilian lawyer.

Ferguson said one claim the agent makes in the affidavit — that two Navy masters-at-arms at the Miramar brig overheard Mays confess while talking to himself — was questionable.

“The idea that he went through 10 hours of recorded NCIS interrogation and steadfastly denied (starting the fire) but then miraculously confessed in the hallway while mumbling in front of two ( Navy police officers) with nothing but their verbal recollections is insane,” Ferguson said Friday.

Ferguson represents service members pro-bono and recently served as the lawyer for several witnesses in the war crimes court-martial of Navy SEAL Eddie Gallagher. He does not represent Mays and is not involved in the Bonhomme Richard case.

Mays’ attorney, Gary Bartel, said the sailor denies any involvement in the fire.

In several past disasters, the service has sought to punish lower-ranking sailors for failures that were actually the fault of those higher in the chain of command, said Ferguson.

“When presented with a choice of holding an admiral or a seaman accountable, you can count on the Navy on punishing the lowest ranking person possible,” Ferguson said.

When the guided-missile destroyers McCain and Fitzgerald collided with shipping vessels in separate incidents in 2017 — killing 17 sailors altogether — the Navy initially sought to prosecute the two ship captains for negligent homicide. Several other members of the crew received administrative punishments after the service cited failures of the bridge crews as causal factors in the collisions.

Among those factors cited on the McCain: that watch-standers didn’t have enough knowledge of the ship’s steering system. However, an investigation by Propublica later revealed that steering system was complex and prone to failure. Top Navy officials also, for years, ignored warnings from its own officers about the poor material condition of Pacific Fleet ships due to the relentless pace of operations in the region.

The Navy eventually dropped the charges against the two commanders.

An even more dramatic reversal came after the 1989 explosion in a gun turret during a training exercise on the battleship Iowa, which killed 47 sailors. Navy investigators first sought to blame the explosion on a suicide by an allegedly gay sailor, supposedly despondent over a failed relationship with another sailor. The Navy’s theory was that the man rigged a detonator and stuck it between bags of explosive propellant powder.

The Pentagon leaked the findings to the media, leading to sensational headlines at the time. But a later investigation by engineers found that the cause was probably powder being improperly rammed into the World War II-era gun. The Navy itself never officially announced what caused the explosion but in 1991 the chief of naval operations apologized to the family of the sailor initially accused.

Next up for Mays is an Article 32 hearing, which functions similar to a civilian grand jury. A hearing officer will hear evidence and testimony and then make a recommendation to the commander of the Navy’s 3rd Fleet in San Diego whether to proceed with a court-martial.