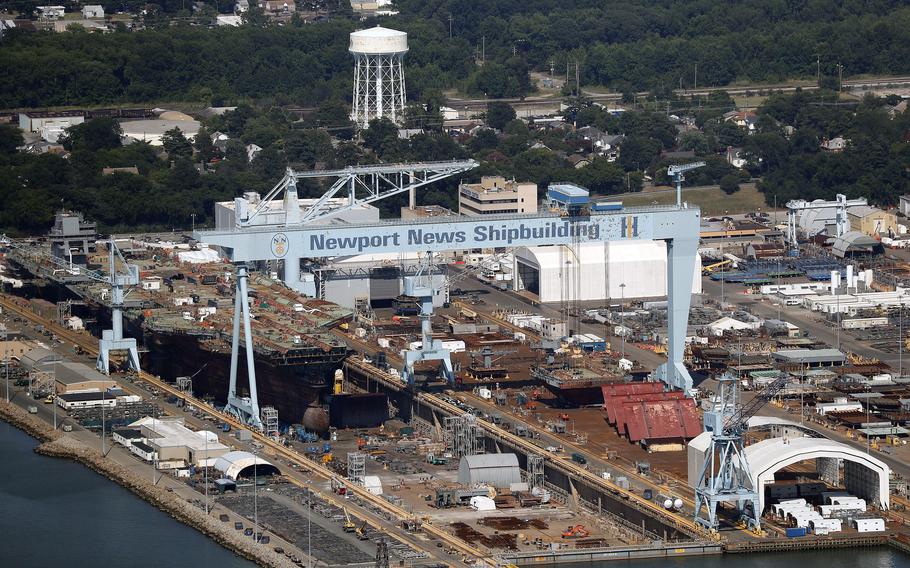 Newport News Shipbuilding is seen from above in 2019. (Jonathon Gruenke, Daily Press/TNS)

(Tribune News Service) — Huntington Ingalls Industries is buying a major defense research and development firm, Alion Science and Technology, for $1.65 billion, a move that will more than double the size of its non-shipbuilding business.

Alion, with some 3,200 employees, is a leading provider of “C5ISR,” or command, control, computers, communications, cyber-defense intelligence, surveillance and reconnaissance services, as well as military training and simulation systems, data analytics and cyber- and electronic-warfare systems.

“I don’t see this as diversification, I see this as an extension of our main product line,” HII President and CEO Mike Petters told Wall Street analysts, some of whom wondered about how the deal meshed with the company’s main shipyard business at Newport News Shipbuilding and the Ingalls yard in Mississippi.

“We’re looking to go where the puck is going to be,” Petters said.

That includes cyber-warfare, unmanned vessels and other technology-focused weapons, he said.

Petters said he’s expecting Alion’s capabilities will enhance initiatives at HII’s shipyards. Newport News, for instance, undertook extensive modeling and simulation to design the reconfigured flight deck on USS Gerald R. Ford, an effort that has spun off into a training operation at its Technical Solutions division that Alion will join, he told the analysts.

Adding Alion to Technical Solutions will boost that division’s revenue from last year’s $1.2 billion to more than $2.6 billion, HII said.

Alion has a backlog of more than $3 billion, it added. About a third of Alion’s business is with the Navy.

HII has arranged financing for the purchase with a combination of new senior notes and new term loan facility.

The company said the acquisition will not slow the pace of a series of major investments at its shipyards.

At Newport News, those include work on the Joint Manufacturing Assembly Facility, the new 315-ton gantry crane at dry docks 10 and 11, the integrated digital shipbuilding, upgrades at the foundry and the 200-foot extension to Modular Outfitting Facility now underway on the building’s west side to support the construction of Block V Virginia-class submarines.

Alion, owned by Veritas Capital, a New York private equity firm, was founded in 1936 by the Illinois Institute of Technology to test and develop new technologies.

The transaction is expected to close in the second half of the year.