Naval Academy turns up the intensity with 2021 Induction Day 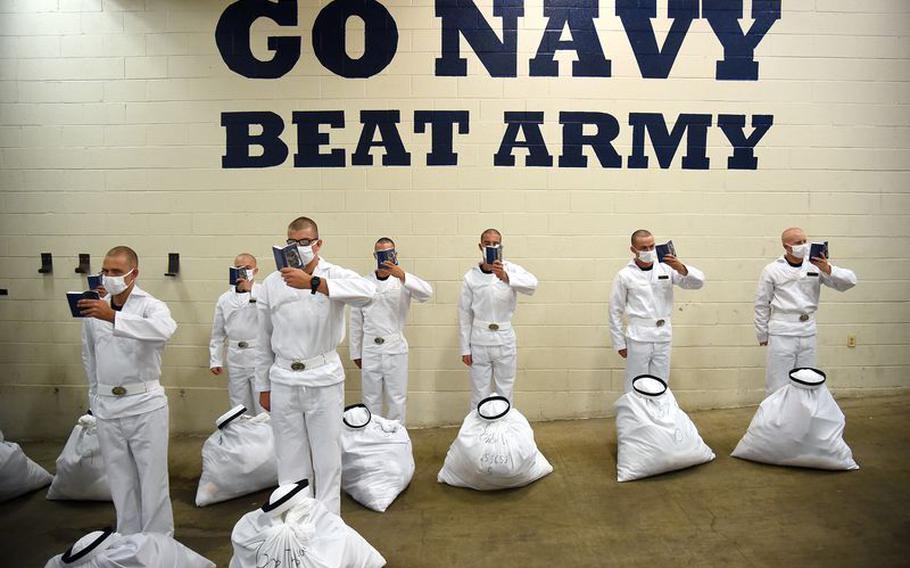 Incoming plebes read their Reef Points as they wait to move out.. The Naval Academy welcomed incoming freshman, or what they call plebes, during Induction Day, Wednesday, June 30, 2021, to begin their plebe summer. (Paul W. Gillespie, The Capital Gazette/TNS)

That’s just part of not having a phone. Already, the incoming plebe will have turned in her phone, her wallet, her watch, practically any personal belonging with few exceptions.

She prepared for the six weeks. She went surfing, hung out with her family. Tuesday night, she watched Pixar’s “Luca.” On the way to the academy, Single listened to music. When it comes to her phone, she had not yet parted with it despite knowing she would give it up for several weeks.

For Single, arriving on campus for Induction Day is the beginning of a journey sought after since her freshman year in high school when she attended an academy lacrosse game.

The Naval Academy welcomed 1,186 new midshipmen to the Yard Tuesday and Wednesday as part of the two-day Induction Day.

There are still some challenges to overcome, as the pandemic is not completely over, said Lt. Col. Todd McCarthy, plebe summer officer in charge. Still, this year there are no restrictions and plebe summer is moving forward.

The plebes this year will not have to spend two weeks in a restriction of movement period, confined to their rooms. They will be able to participate in close contact activities.

But the Class of 2025 looks ready, he said. They are dedicated and motivated.

“I mean, they’re excited,” McCarthy said. “I can see it, and I can feel it. Everybody can.”

On the Yard, the only sign of the deadly pandemic, which altered much of the academy’s last year and resulted in a shortened plebe summer, were white masks which each of the midshipmen wore as they made their way through Alumni Hall.

Even those came off after the plebes read their Reef Points, as long as they were vaccinated.

Single, 19, is from Millersville and an Old Mill High School graduate. But she comes to the academy with a year of collegiate experience already underneath her white belt.

Prior to coming to the academy, she attended Louisiana State University for a year. As someone who ultimately wanted to attend the academy, she participated in the civilian preparatory program, which allows people to go through similar training as those who attend the Naval Academy Preparatory School in Rhode Island.

Now, Single is at the academy and Wednesday evening she’ll take the oath swearing her into the military.

“Part of it doesn’t feel real, to be honest,” she said, standing on the sidewalk outside of Alumni Hall, where Induction Day procedures took place. “I am absolutely over the moon though.”

To start her induction process, Single first had to check-in and then follow the winding path through Alumni Hall that would lead her to each station.

She would receive her name badge.

She would start giving her paperwork.

She would learn the proper way to address every officer or older midshipman.

She would get yelled at.

Her uncle, a class of 1995 graduate, told her not to take the shouts personally.

But the detailers, the people in charge of I-Day, certainly tried. A set of four spent hours in the faces of plebes, telling them to hurry as they had to grab their bags and head to the next station.

If it was a question, the proper response is sir, yes, sir. Or ma’am, yes, ma’am. But if it is acknowledgment, it should be sir, aye, sir. That tripped up many of the soon-to-be midshipmen.

Emily Messinese, of Manchester, Maryland, was ahead of Single by about an hour and a half. And she received a fair amount of shouts as she made her way through Alumni Hall.

After receiving her uniform, she needed to get her name badge back on. She did not do it fast enough, and a detailer made sure she knew it.

Messinese wants to serve, she said. That’s why she applied to and chose the Naval Academy.

She first visited in eighth grade, and the Gerstell Academy graduate said she became more serious about attending in high school.

She wants the opportunities that come with a career in the military, and she is looking forward to being part of the brigade.

She wanted a different college experience than most of her high school classmates, and she’ll get that during the summer training.

But first, Messinese needed to get through Induction Day.

With her belongings given to the academy, she proceeded through Alumni Hall. She walked through the amnesty tent, which is where she had her last chance to throw out any contraband.

Then to the chaplains for a religious needs assessment, and then to medical, where she would be screened, a process that took roughly an hour and a half.

Once that was finished, she received her uniforms. And more detailers yelled at her. Like many plebes before her, she did not address every detailer in her way.

She made sure her uniform fit. She received her shoes.

And finally, she would say her Reef Points along with other midshipmen.

Wednesday evening Single and Messinese were slated to stand with the other members of the class of 2025 and take the oath, officially making them midshipmen.