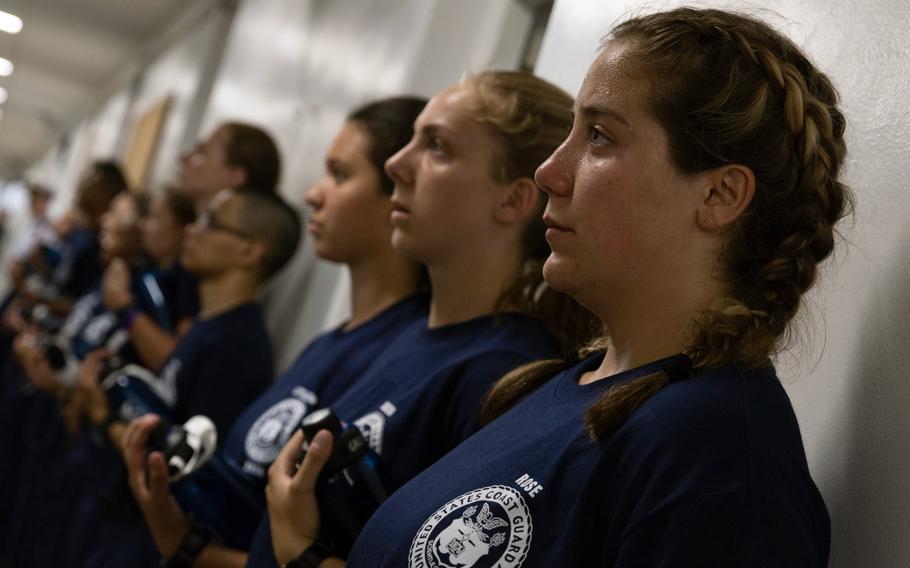 The U.S. Coast Guard Academy welcomed 291 cadets in the Class of 2025 for Day One on June 28, 2021. Day One marks the start of Swab Summer, an intensive seven-week program that prepares students for military and Academy life. (Krystyn Pecora/U.S. Coast Guard)

NEW LONDON, Conn. (Tribune News Service) — Day One of Swab Summer at the Coast Guard Academy on Monday looked much as it did before the COVID-19 pandemic, including the return of a hallmark of indoctrination that was understandably absent last summer amid fears of droplet contamination.

The Coast Guard Academy welcomed 291 swabs, or new cadets, for the first day of their seven-week training. Day One included issuance of uniforms, drill practice, haircuts for the men and a swearing-in ceremony.

About 40% of the Class of 2025 are women, and 36% are from underrepresented minority groups. The class includes eight international students, from Jamaica, the Philippines, the Dominican Republic, Rwanda, Sri Lanka and Taiwan.

Nicholas Folkes and Shawnamarie Sinclair are the first two swabs the academy has had from Jamaica. This is the first time in the United States for both, and they will be serving in the Jamaican military upon graduation.

“It’s going to be very tricky adaptation, so just follow command,” he advised the two. The U.S. Coast Guard Academy welcomed 291 cadets in the Class of 2025 for Day One on June 28, 2021. Day One marks the start of Swab Summer, an intensive seven-week program that prepares students for military and Academy life. (Greg Boland/U.S. Coast Guard)

Waterford High School graduate Mason LaForte said he has been around Coast Guard people his whole life, considering his father is men’s lacrosse coach at the academy. A few hours into training, LaForte said the day so far had gone “as expected,” and he offered one takeaway: “Just don’t look at anyone, and you’re fine.”

Earlier, one of the second-class cadets, students who are entering their third year and train the swabs, could be heard yelling at a swab, “Don’t look around!”

Between graduating high school and coming to the academy, LaForte spent a year at Naval Academy Preparatory School in Rhode Island, as did fellow Waterford graduate Kyle Jacobson.

Waiting to greet his son as the class picture was being taken, Bret Jacobson — who previously worked as a lab tech at the academy for five years — said he was “fighting back tears a little bit” but this was a proud moment.

Juan Garcia, a 2020 graduate of Ledyard High School, went to the University of Connecticut for a year but felt it wasn’t the right fit. He wanted a bit more of a military program, more structure.

He said after a few hours Monday, “It’s been a lot of fun. I’m actually enjoying myself.”

Fitch High School graduate RaileyAnn Westervelt said what appealed to her about joining the Coast Guard was its humanitarian mission — she thinks the “search and rescue missions are by far the coolest” — and said she likes that the academy is small.

“If they pick you to come here, they believe you can make it,” Westervelt said. She’s looking forward to making “those kinds of lifelong connections you don’t build with anyone else unless you go through something like this together,” and is excited to go on the training ship Eagle.

Westervelt said in the morning that reading the Running Light was harder than she anticipated, between the small print and trying to focus while people are yelling. The Running Light is the cadet handbook, which swabs are instructed to study while waiting in lines and between activities.

But there’s also the matter of knowing when to remove the book from within a few inches of your face. While Bravo platoon members were counting off to make sure they were all accounted for after getting their uniforms, a second-class cadet shouted at one swab, “Get your Running Light out of your face NOW!”

Rear Adm. William Kelly, superintendent of the Coast Guard Academy, said the academy learned a lot from the pandemic and kept some of the changes, such as moving the academic and physical fitness assessments from week six or seven to within the first 10 days. He said swabs are less “tired and exhausted and dehydrated” at the beginning of the program.

Kelly said there’s no vaccination requirement, and that 25 swabs had arrived unvaccinated.

In terms of recruiting over the past year, the superintendent said “we learned that you don’t always have to put somebody in the car, on the plane and send them off to some place” to meet prospective cadets. Another pandemic change was that the academy went test-optional on the SAT and ACT.

He said the academy opened to swabs on Friday, noting that about 50% had never set foot on campus before.

Newly arrived Command Master Chief Maria D’Angelo, who holds the senior enlisted position at the academy, commented that swabs seemed “very shy” Friday and Saturday and were sticking with their parents, but by Sunday, they were “in these gaggles, these new groups.”