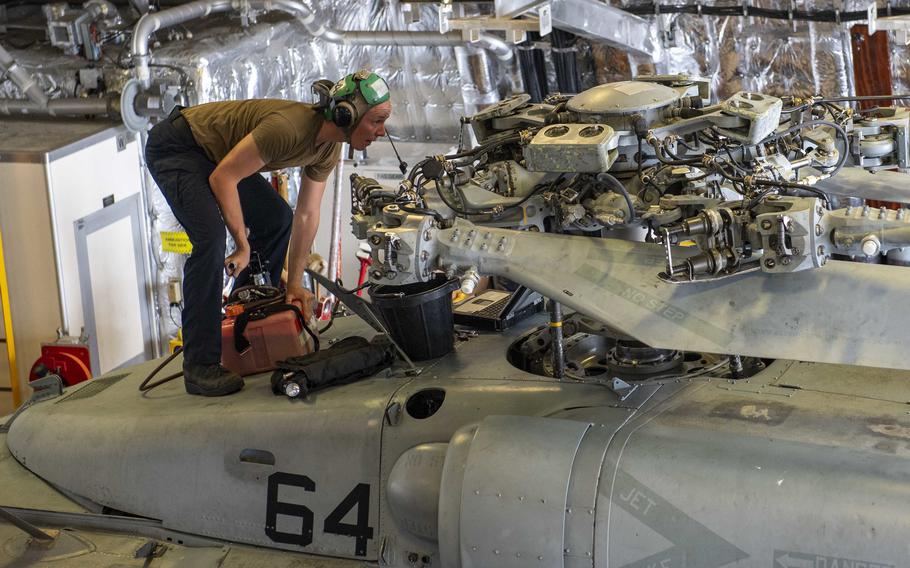 “What’s going on there?” he said, leaning in to the speaker phone. “I see a lot of maintenance going on ... (environmental control system) exhaust, hmmm — OK. I’m showing the center plate has been received ... correct?”

It was, Jacksonville replied.

The ASD representative chimed in: “Should get that today.”

It was the kind of news that they like to hear at the MOC, the two-year-old, Norfolk-based heart of a Navy-wide push to speed maintenance and repairs of its aircraft.

The push started when then-Secretary of Defense Jim Mattis asked why so many of the nation’s military aircraft weren’t ready to fly, said Rear Adm. John Meier, commander of Naval Air Forces Atlantic, which runs the MOC.

The answer was maintenance and repairs were taking longer than expected, in large part because the sailors who do the work weren’t getting the parts and equipment they needed quickly enough.

The Navy’s answer was to take a lead from the airlines and the operations centers that schedule parts and flight crew assignments.

The center’s daily conference calls with the maintenance team leaders of Naval aviation squadrons that bring in representatives from the Navy’s parts-inventory centers, the Department of Defense central supply chain agency and manufacturers are at the heart of a new sense of urgency about keeping planes and helicopters flying.

The MOC’s mission result: the number of mission-ready FA/18 SuperHornets, the first planes tackled by the center, went from an average of about 250 to more than 340. Since then, the MOC has added all the Navy’s helicopters, E2 Hawkeye early warning planes, P-3 patrol planes, C-2 carrier onboard delivery planes and EA/18 Growler electronic warfare planes to its work list.

Vice Adm. William Galinis, commander of the Naval Sea Systems Command, has said the MOC could be a model for his efforts to cut delays in maintaining and repairing ships.

It’s not just the MOC’s coordinated, immediate conversations between a Navy maintenance unit with a repair headache and the entities that have the parts for the job that have cut the number of aircraft grounded while awaiting repair or maintenance, either, Meier said.

Built into the system — if not immediately visible on the big screens Ferreira was monitoring — are analytic computer programs that the MOC team uses to predict which aircraft are going to need which part or maintenance task and when, as well as tools to help the team set priorities when any particular part is in short supply.

The team has been using those tools to look for the top 20 items that cause problems, and then focuses the attention of Navy maintenance units, supply chain managers, DoD procurement experts and manufacturers on finding solutions — everything from approaches to stocking supply cabinets to redesigning parts, Meier said.

It’s a repeated process; once the top 20 issues are addressed, the idea is to move on to the new top 20, he said. And he’s looking forward to adopting the MOC’s approach of daily check-ins and analytics to keep on top of the Navy’s equipment cost-drivers, as well as its people needs.

“My job is support for the squadrons — that’s equipment, manning and training,” he said.

There are plenty of reports already to track these needs — for instance, that a squadron’s maintenance team may be having more trouble with one particular task than expected, and so could stand some additional focused training.

But the MOC’s approach allows for speedier and even more coordinated responses, he said.

The MOC’s analytic tools can be an early warning signal, too — as when, right after the good news about washers for helicopter 602, Ferreira asked “And Gulf Whiskey 88 (the next work order for 602 on the screen), what are you showing there?”

It was for an electric cable assembly, and the ASD representative said it would be some months before it was ready.

“Is anyone working that - an emergency buy, maybe.... DLA (Defense Logistics Agency), what do you have on that?” Dave asked.

Nothing immediate, the agency representative replied

“Yeah?” said Dave. “What kind of demand are you showing on these cables?”

The monthslong lead time for the cable was today’s problem for helicopter 602 and the Jacksonville squadron’s aviation electricians — but if there was a lot of demand for the cables, and if they broke down as quickly as they had on 602, Grove suspected the MOC had just found another potential parts headache.

Grove knew he’d be following up with all the actors along the chain between the manufacturer and the Navy’s own parts inventory managers.

But the MOC team was now talking to Naval Air Station Key West.

“Moving onto aircraft Zero-1 it looks like you want to fly it, you’re just waiting?” Ferriera asked

“Hey, what’s going on with this valve?” Ferreira asked.

MOC supply director, Cmdr. Chris Buczkowski, standing behind Ferriera and peering intently at the screen, spoke up, suggesting checking with the Army or Air Force..

“It’s the Army,” Key West replied. “The last email says it takes a little bit of time with scheduling — big back order, I have to check.”

The Key West aviation supply detachment weighed in: He’d checked around, and apparently there was a shipment of 19 on the way from the Army to the Navy’s big supply depot in Pennsylvania.

The pace of the back and forth from people on the conference call and Buczkowski in the MOC quickened as participants simultaneously ran checks of their computerized inventory lists.

In the end, Norfolk ASD found a single valve on its shelves.

Normally, it would have stayed there in case this critical part was needed locally — but Norfolk decided to ship it straight away to Key West.

And the Pennsylvania supply depot said it would pull a valve from the Army shipment as soon as it arrived and speed it down to Norfolk, as a replacement.

“We do that all the time,” Grove, the MOC commander said. “It’s called payback.”