Navy nuclear refueling barge arrives in Mobile to be scrapped 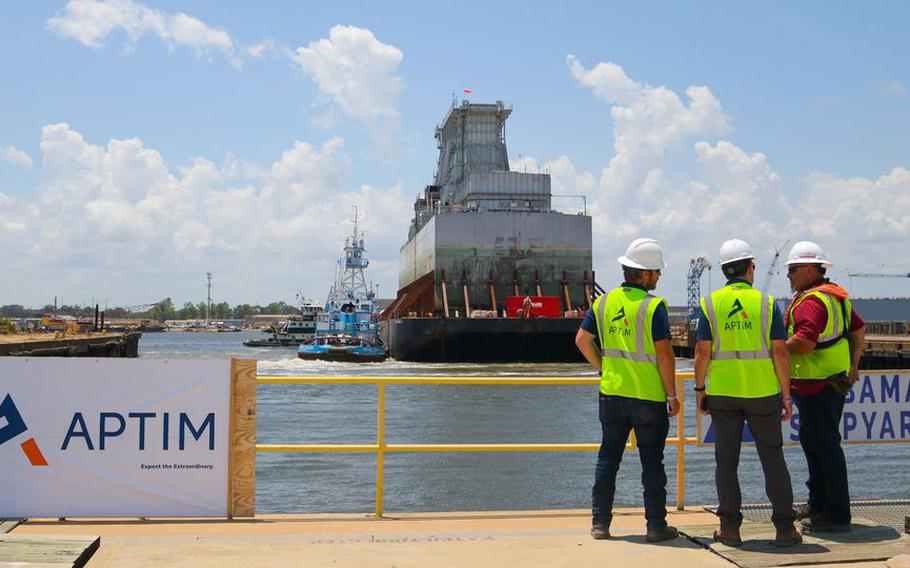 A Navy vessel called the Surface Ship Support Barge, used to refuel nuclear-powered ships and dismantle spent fuel units, arrived in Mobile on June 1, 2021. It will be scrapped in a three-year process. (Lawrence Specker, al.com/TNS)

MOBILE, Ala. (Tribune News Service) — A gigantic new fixture arrived on the skyline of the Port of Mobile on Tuesday: A U.S. Navy Surface Ship Support Barge that has made its final port of call.

The barge was used for dockside refueling of nuclear-powered vessels and for disassembly of spent nuclear fuel components. It has been deemed obsolete and in 2020, APTIM Federal Services LLC won a contract for the task of dismantling it, which will be done at the site of partner Alabama Shipyard. APTIM describes the job as a three-year, $129 million project.

According to information released by the Navy in 2018, there is no nuclear fuel aboard the barge and efforts to reduce residual contamination have been under way since at least 2004. According to APTIM, the process will remove “all hazardous and radiological materials following proper disposal regulations. The majority of the waste from the project will be disposed of at Waste Control Specialists’ facility in Andrews, Texas.”

“This dismantlement and disposal of the SSSB represents a major step forward in NAVSEA’s campaign to reduce, in the most cost efficient and safe way, inactive nuclear reactors in both vessels and shore facilities,” said Alan Weakley, president of APTIM’s business unit overseeing the disposal of the SSSB. NAVSEA is a reference to the Navy’s Naval Sea Systems Command.

“APTIM is proud of our contribution to safely and efficiently dispose of this once strategic asset,” said Weakley. “We are also proud of our partnership with Alabama Shipyard and their impressive safety record.”

APTIM said the project will use “proven programs and controls to prevent environmental releases. These include the use of containment systems and enclosures, environmental monitoring, on-site regulatory oversight by the Nuclear Regulatory Commission (NRC), financial assurances for project completion with performance bond, liability insurance and pollution liability insurance, and proactive and transparent communications with the community.”

“The SSSB brings with it an exciting opportunity for the City of Mobile’s economy by paving the way for tremendous job growth now and through future work in the dismantlement of Navy ships with highly skilled personnel,” said Mayor Sandy Stimpson, quoted in an APTIM news release. “APTIM has an exceptional record, and I look forward to seeing their continued success and the positive impact this project will make for our workforce in Mobile.”

The barge was delivered Tuesday to Alabama Shipyard after a 13-day tow aboard a “heavy-haul vessel” from Newport News Shipyard in Virginia. According to U.S. Navy information, it started life as a tanker and was converted to its nuclear use in 1964. It is about 268 feet long, displaces 4,813 long tons, and has a main deck “about 41′ above baseline with a clean house hatched about 109′ above baseline.”

Since the beginning of the effort to contract out the work, there has been speculation that the process used to dismantle the SSSB could serve as a partial model for the future breaking down of the carrier USS Enterprise, deactivated in 2012 and decommissioned in 2017. Mobile reportedly has been considered as a potential site for that project, expected to cost more than $1 billion.