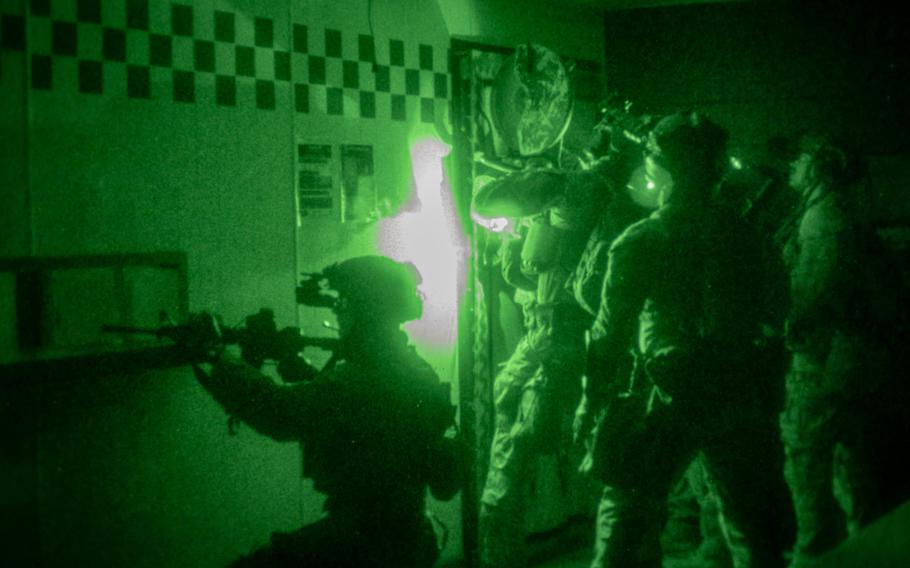 HONOLULU (Tribune News Service) — Under cover of darkness on Tuesday night, members of the Honolulu Police Department’s SWAT team, federal agents and members of the Marine Corps’ Okinawa-based Maritime Raid Force quietly made their way into Aloha Stadium as part of an urban combat training exercise.

Once inside, they tackled a variety of tasks, from rescuing hostages to taking down a fentanyl lab.

Decked out in tactical gear, teams moved swiftly, avoiding the venue’s lights as they engaged enemy forces and tried to make their way through barricades while avoiding booby traps and stopping to treat wounded hostages.

The training is part of a now annual event known as the Realistic Urban Training Exercise, or RUTEX. Launched in 2019, the exercise was put on hold in 2020 due to COVID-19 restrictions. This year’s iteration, which began Jan. 6 and wraps up today, is part of the Maritime Raid Force’s pre-deployment training program that certifies Marines for deployment in the military’s Indo-Pacific theater of operations.

Given that in a real-world scenario they’re likely to operate on unfamiliar ground, for RUTEX training, Marines are thrown into exercise scenarios with short notice.

“Being stationed in Okinawa, training opportunities off-installation is not available,“ McMahan said. “ Hawaii allows us to conduct training off-installation while working with local agencies such as the Honolulu Police Department, the FBI, as well as time with the community.”

About 100 Marines participated in raiding exercises at Oahu sites, including Wet N’ Wild Water Park, Dillingham Airfield, Aloha Stadium and others. HPD officers and FBI agents play the role of local forces defending a fictional island nation that finds itself increasingly torn by violence. Also, the Marines underwent training with members of the Hawaii National Guard and the Army 25th Combat Aviation Brigade.

“This scenario that we set up in Hawaii revolves around an island that possibly is being influenced by an outside entity,“ McMahan said. “We’re moving from a pre-conflict to a conflict zone. And we are combating ... local forces being trained by an outside power and then ... inciting violence as well as unrest within the country itself.”

The Marine Corps has over time built relationships with local landowners, businesses and government agencies to secure both training grounds and actors. McMahan said Marine veterans within HPD and the FBI have played a key role in coordinating training and building relationships for training. 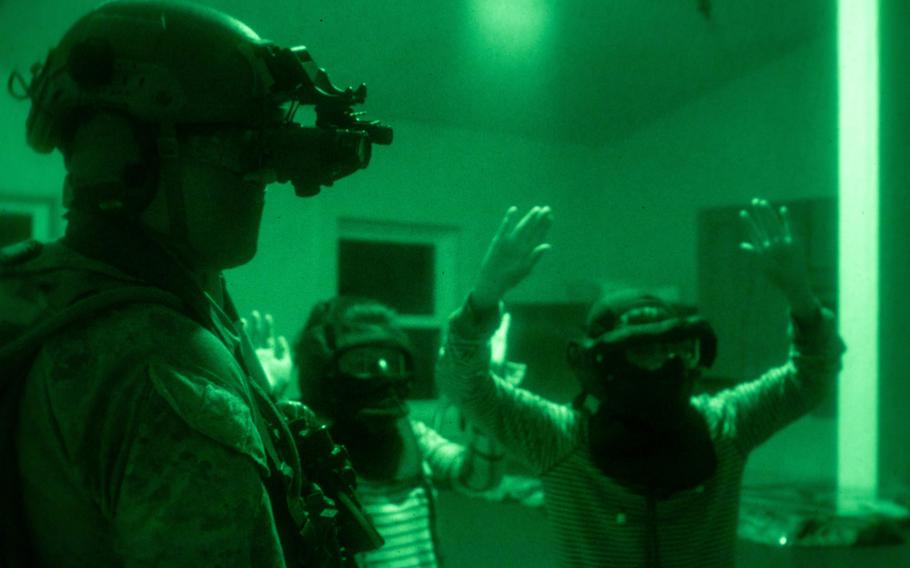 He said RUTEX affords local law enforcement officers an opportunity to practice skills like hostage rescue, bomb response and how to respond to an active shooter.

This year’s RUTEX has followed similar patterns to the 2022 iteration, using a similar exercise scenario and many of the same training sites.

However, it takes place in a changed world: About a month after RUTEX 2022 wrapped up, the Russian military escalated its war with Ukraine, which began in 2014 with an attempted push into the capital, Kyiv, sparking a wider conflict that has gripped the world’s attention as Russian and Ukrainian forces continue to fight pitched battles.

The Marine Corps is restructuring its entire force as part of Force Design 2030, beginning with troops in Hawaii and the Pacific. The initiative is largely the brainchild of Marine Corps Commandant Gen. David Berger, who is expected to step down later this year. In May, during the Modern Day Marine conference in Washington, D.C., Marine Lt. Gen. Matthew Glavy told reporters Berger had asked Marines to study the conflict in Ukraine to inform the future of Force Design 2030 “because he needs to get this feel for how things are progressing, how they’re trending.”

The war in Ukraine has involved some of the largest battles the world has seen this century, with both sides using tanks and artillery to pound opponents while also tapping electronic warfare and drones to disrupt operations. McMahan said that in crafting RUTEX 2023, Marines were very much keeping their eyes on conflict zones around the world.

“We utilize real-world scenarios, and we use the lessons learned as well as a tactics worldwide (for) our immersive scenario,“ McMahan said. “That can change anything from target acquisition, to utilization of civilian drones, to tactics that we see when an enemy force tries to basically sway the general populace to support their overall mission.”

The use of drones by both sides of the Ukrainian conflict has been ubiquitous, including both state-of-the-art military drones and relatively cheap commercial civilian drones used for surveillance or modified to use weapons. McMahan said that while drones were only one element in this exercise, “it was on the instructors’ minds to throw this into this scenario.”

In December, during a roundtable with reporters, Berger said observations of tactics and strategies employed by both sides in the war in Ukraine have “validated some of the approaches we’re taking. ... I’m not into blanket statements, like everything that’s happened in the Ukraine is the answer all around the world, but much of what we’re seeing in Ukraine is agnostic of what theater, what part of the world we’re operating in.”

For Marines in the Pacific, the focus has been on China as tensions simmer over maritime navigation and territorial rights in the South China Sea, a critical waterway through which two-thirds of international trade travels. The Chinese military has stationed forces on disputed islands and land formations claimed by neighboring countries and has declared the entire region its sovereign territory despite a 2016 international court ruling in favor of the Philippines against Beijing’s territorial claims.

Additionally, Chinese forces have stepped up exercises around Taiwan, a self-ruled island that China considers a rogue province and has vowed to bring under its control by any means, including military force.

“(The Chinese military is) doing their own sort of force design ... and investing more in amphibious formations,“ Berger said. “That’s a good signal where they’re headed. They want to go out into the world and do things. ... They’re building an amphibious force so they can project power.”