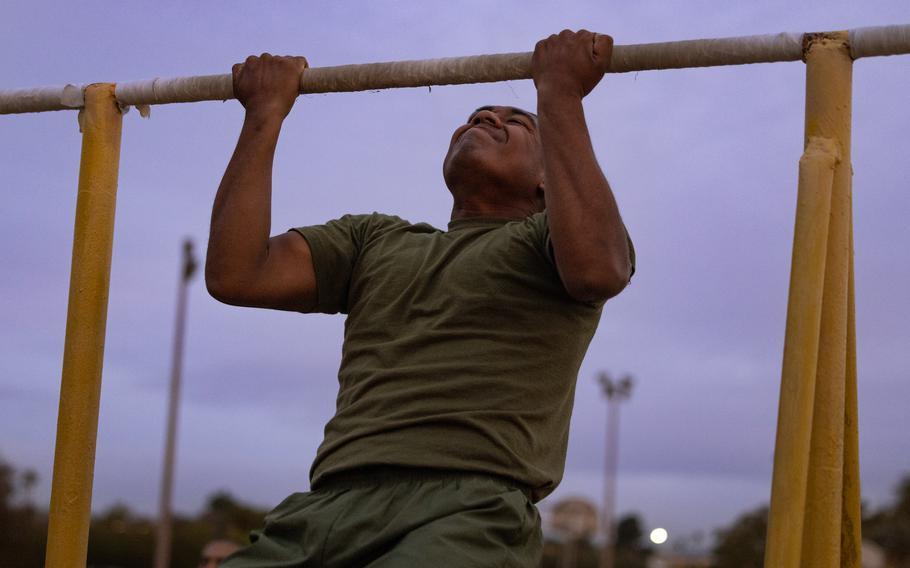 The Marine Corps has begun shipping more than 250 new biometric machines around the globe as part of a new policy to measure body composition standards more accurately before labeling a Marine overweight, according to the service’s Training Command.

Under the new policy, which went into effect Jan. 1, Marines who exceed weight standards and fail a body fat assessment taken with a measuring tape will be evaluated with a body scan before being sent to the body composition program or being discharged from the service, according to an August announcement about policy change.

The Marine Corps concluded after a yearlong study done in collaboration with the Army Research Institute of Environmental Medicine that the scan, which is conducted on a bioelectrical impedance analysis machine, can detect the percentage of body fat that a person has more accurately than the tape test.

The study evaluated the Marines’ body composition standards, which resulted in policy changes, and included allowing women to have one more percentage of body fat than previous standards and allowing exemptions to weight standards based on physical fitness test scores.

Gen. David Berger, commandant of the Marine Corps, said the study was a “milestone in understanding the health and performance” of Marines.

“Ultimately, this is about warfighting. We need to find the most practical, accurate and unbiased method of measuring body composition to maintain a healthy, ready force," he said in a statement.

The Defense Department last year updated its policy on body composition standards, giving the service branches more freedom to tailor weight and body fat requirements to their own troops and mission.

While the Marine Corps is the first to use technology beyond a tape measure to assess body fat, the Army, Navy and Air Force also have been making changes.

The Army, too, allows soldiers with high enough fitness test scores to be exempt from weight standards.

The Air Force announced this month a new body composition program that is not part of the service’s fitness test. The new program uses an airman’s waist-to-height ratio to measure for excess body fat. The change also applies to the Space Force and assessments begin in April.

The Navy hasn’t made any major changes to its physical fitness and weight standards in recent years, except reducing the number of assessments required of sailors each year from two to one.

The Marines’ study found the tape test is only about 92% accurate, so the new body scans are to add a new layer of verification, said Col. Eric Quehl, director of the policy and standards division at the Marine Corps Training and Education Command.

“You've got that 8% of Marines, and it varies whether it's male or female, who are either underestimated or overestimated. The tape is still good for most Marines, but not everyone,” he said. “We need to hold people accountable. These BIA machines, I think, give everyone much more confidence that the institution is looking at advanced methods and technology to ensure that we are being as fair as possible.”

For the last two years, about 1% of Marines failed the services weight requirements and ended up in the program meant to get them back into regulation.

Following the announcement in August, the command began determining where to send the new machines, which are about the size of a regular scale, and then creating training materials so that units knew how to operate them. The challenge was reaching Marines working outside of the large installations, such as recruiters or those in the Reserve.

The Marine Corps will continue to study body composition with Marines stationed in Okinawa, Japan, Quehl said. The idea is to try one day to move away from height and weight tables to focus only on the ideal balance of body fat and lean muscle.

“What is that ideal [amount of] body fat and how that's tied to performance? Not just the fitness test, but combat performance,” he said.

The continued research will also aim to identify behaviors that damage one’s health, such as lack of sleep and poor nutrition, Quehl said.

Meanwhile, Training Command will monitor the new policy with the body scanners to determine how the rollout is going and if leaders should make adjustments.