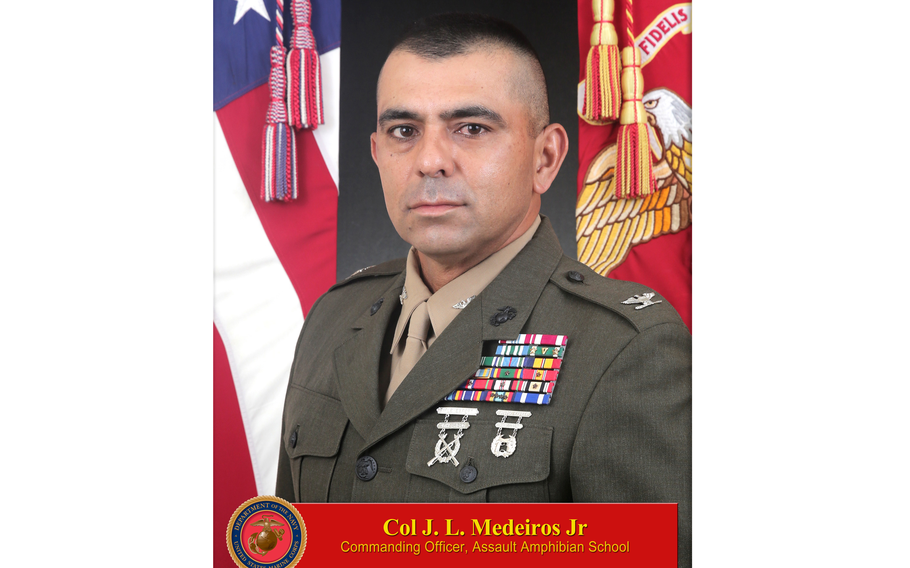 Marine Corps Col. John L. Medeiros Jr. has been fired from his post as the commander of the Assault Amphibian School at Camp Pendleton. (U.S. Marine Corps)

Marine Corps Col. John L. Medeiros was fired Tuesday from his post as the commander of the Assault Amphibian School at Camp Pendleton due to a “loss of trust and confidence” following an investigation into a nonfatal training accident that occurred at the California base, service officials said.

Brig. Gen. Farrell J. Sullivan, commander of the Marine Corps’ Training Command, made the decision to relieve Medeiros because of information obtained while investigating the accident that happened in October, according to a news release from the command. However, the release does not clarify if the information was related to the accident or another issue.

The investigation into the training accident is ongoing, according to the command.

On Oct. 13, an Amphibious Combat Vehicle assigned to the school suffered a “reported mechanical malfunction” and overturned into the surf, according to a USNI report. No injuries were reported, but the incident led the Marine Corps to stop waterborne operations in the surf zone until further review.

The wheeled ACV is replacing the Marine Corps’ aging fleet of tracked Assault Amphibious Vehicles, and Training Command said Wednesday that the Marine Corps is prioritizing safety and standardization in its training environment as part of the transition.

The command did not say who will serve as the school’s commander until a replacement is named.