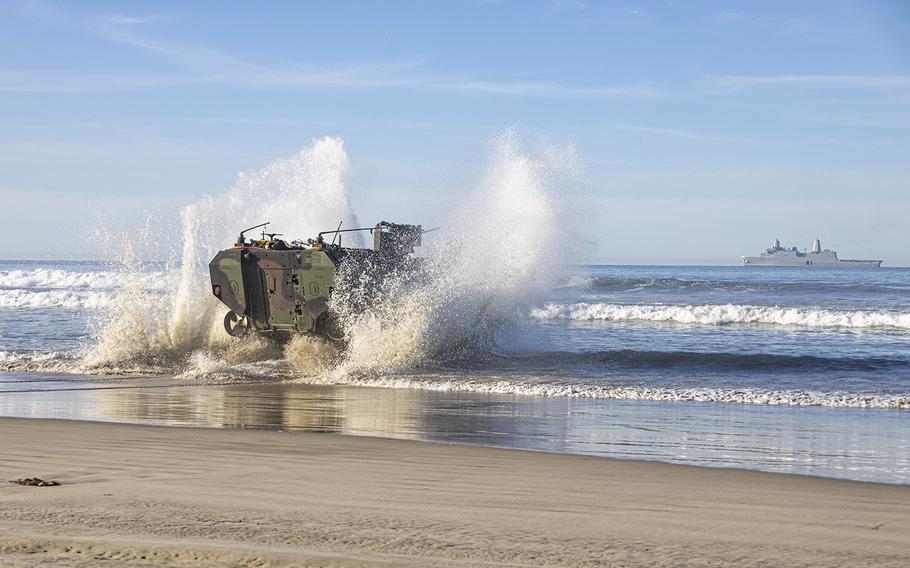 (Tribune News Service) — The Marine Corps’ new armored Amphibious Combat Vehicles, intended to become the main transport in the future for getting troops and gear from ship to shore, won’t be available for their first planned deployment this fall and are now being restricted in water training at Camp Pendleton because of safety concerns.

Four of the new ACVs flipped in the surf in just the last year – in all cases, the Marines were able to get out and swim to shore. Three of the 36-ton vehicles were damaged beyond repair.

The ACVs, which use eight wheels and have a shape designed to better survive a bomb blast, are replacing the Marine’s aging fleet of 800 tracked Amphibious Assault Vehicles, which have been in use for decades and now require many hours of maintenance to keep operational. The ACVs have been designed to have a swim capability similar to the AAVs and have equal or greater mobility when compared to the M1 Abrams tank, another vehicle on its way out.

But Marine officials are slowing the rollout of the new ACVs after the vehicle’s difficulties in the surf zone. Since the first ACV flipped in September 2021, leaders have restricted the water conditions Marines can train in and even temporarily suspended water training to give time for further reviews.

Still, Marine officials say the ACV is the future of amphibious warfighting.

And the Marine Corps’ response placing restrictions on training with the ACVs shows lessons were learned, officials said, after a deadly training accident in 2020 involving an AAV – nine men died when the vehicle sank to the bottom of the ocean as it swam from San Clemente Island to an awaiting ship. Investigators said the accident could have been prevented, and a lack of adherence to protocols and a rush to prepare for a deployment contributed. The Marine Corps rolled out new, stricter rules and procedures guiding training.

Marines called for the delays in ACV training to ensure that “the assault amphibian community can review best practices and procedures to remain capable, safe and ready.”

To prepare for upcoming deployments, Marines and their vehicles typically undergo extensive training, especially in the final six months. Training is done in a crawl, walk and then run cycle, with each step getting more intensive and progressively more complex – platoons are graded after each training event. The ACV platoons began training in March off Camp Pendleton, making beach landings from the USS Anchorage.

After an open water pause was initiated in July when two ACVs flipped in high surf off Camp Pendleton, Marines could only train with the vehicles in protected waters near the base. Then, late last month, those restrictions were lifted, and the vehicles returned to the ocean again, but only if the surf conditions were moderate, including waves at 4 feet or smaller. Then, on Oct. 13, another ACV flipped in surf condition reported at 2 feet to 3 feet.

On Oct. 14, Marine officials again limited the vehicles from surf zone training. Marines can still train in the ocean, but only by entering and exiting through a protected basin. It took Marines four days to get the broken-down ACV from the water.

“We’re taking a deliberate and methodical approach to fielding this platform,” Lt. Gen. David Furness, deputy commandant for plans, policies and operations, said. “This adjustment to current guidance ensures our Marines have the ability to safely train and maintain proficiency while we work to conduct additional testing.”

The ACVs were put through their paces on land at Twentynine Palms and then in 2019, moved to Camp Pendleton for evaluation on training ranges and in the water. Marines who tested them then reported finding the vehicles superior to the outgoing AAVs.

The vehicle can carry 13 infantry Marines plus three crew members. It travels at 6 knots in the water and up to a distance of 14 miles at sea.

The ACV is considered “the future” of the Marines’ operations, especially now as Marine Commandant Gen. David Berger sees the service returning to its amphibious roots and working more closely with the Navy. He envisions the potential for island-hopping campaigns and other amphibious operations in the Indo-Pacific, an area military leaders expect will be particularly contested in the coming years.

Before purchasing the ACVs from BAE Systems, the Marines tested another vehicle known as the Expeditionary Fighting Vehicle, built by General Dynamics. But after spending $3 billion in development, the program was cut in 2011 during testing.

As of September, there were 126 vehicles at Camp Pendleton; 90 are with the 3rd Amphibian Assault Battalion stationed at Camp Pendleton and 36 are being used by Marines at the base schoolhouse that trains the amphibious troops.

Concern about ACVs from the AAV community

But some Marine veterans familiar with the vehicle and its operations have worried about the reliability of the ACV, especially in the surf zone.

Among them is retired Lt. Col. Kent Ralston, a former AAV battalion commander who was also a testing director for the Expeditionary Fighting Vehicle – a vehicle he said was actually “incredible” in the water.

When the ACV program was announced, Ralston and others in the AAV community weren’t so sure its design was the best for replacing the AAVs.

The AAV runs on tracks, which help anchor the vehicle in water. The ACV switches out those treads for wheels.

“When it flips, they want to go to the surface like eight gigantic balloons,” Ralston said. “We’re fortunate those four vehicles only flipped on their side. If they flipped on the top, Marines would not have been able to get out. Maybe they could have found an air pocket until someone could get them, but one of the vehicles sat out there for days.”

As the ACV program continued to ramp up over the last several years, Ralston went as far as to write letters to two commandants at the time, airing his concerns.

“I felt strongly it was a bad idea and that it’s going to get guys killed,” he said. “I could see the disaster it would be.”

“I’m very skeptical you can make a wheeled vehicle as stable as a tracked vehicle,” he said.

The ACV’s steering, Ralston said, could also be a factor in the surf zone. He said from what he’s heard from Marines who have driven both, the ACVs steering takes more to learn.

“AAV is using the steering wheel just like a car; in the ACV you don’t use a steering wheel, you use hand throttles and a gear selector,” he said. “It just comes down to what’s more natural, but the new method can be learned. The main issue is that the steering motors aren’t responsive, and there is a pause before they actually start to steer.”

“It’s like coming to an intersection,” he said, “and not being able to steer left till the next intersection.”

Ralston said he worries that with all of the vehicle’s limitations, including its present training restrictions, it won’t meet real-world applications and will not meet the needs of the Marines in the field.

“When they put it into a real-world environment, it can’t do it because it doesn’t match real-world needs,” he said. “There might be an engineer that can fix it, but I don’t think there’s anything they can do to get it through the surf zone. I think the tires are an inherent design flaw that can’t be overcome in surf zones ops.

“When you’re in an extreme situation,” he added, “you can’t wait for the sea state to get into your parameters.”

Marines remain confident in the ACVs

Marine Corps officials say they are convinced the ACV is the best vehicle for their future operations and that it is more lethal, is better designed for troops to survive attacks and is reliable.

Marine officials worked with manufacturer BAE on the vehicle’s design to meet their needs and on production and testing. Included in the testing was making sure the ACV could surf through a 6-foot wave, Marine officials said.

Now, in light of the recent incidents with flipping, Marines will test the ACVs in the surf to see what other factors beyond surf height might impact the vehicle’s performance, officials said. And, officials said, contrary to what Ralson has heard, Marines who have operated both vehicles report the ACV is more responsive in the water.

“Our current guidance allows us to train our Marines, giving them the opportunity to gain that experience safely while also allowing us to test the ACV in certain conditions,” said Capt. Ryan Bruce, a Marine Corps spokesman. “We’ll take the data from these tests and ultimately incorporate it into our tactics and procedures that will allow us to take full advantage of the ACV’s capabilities in the real world.”

Marines will continue to test the ACVs in controlled water conditions to determine the challenges and how to best overcome them, he said. The vehicles have no restrictions on their use for land training.

And, in the meantime there are aircraft and Navy craft that can handle some of the work the ACVs would have performed during the next deployment, officials with the 1st Marine Expeditionary Force said.

“The Marine Corps is a learning organization,” Bruce added. “Every time we go out for training or on an operation, we’re capturing data and insights and using those lessons learned to refine our tactics and procedures. It’s how we ensure we remain ready to respond to crises around the world.”