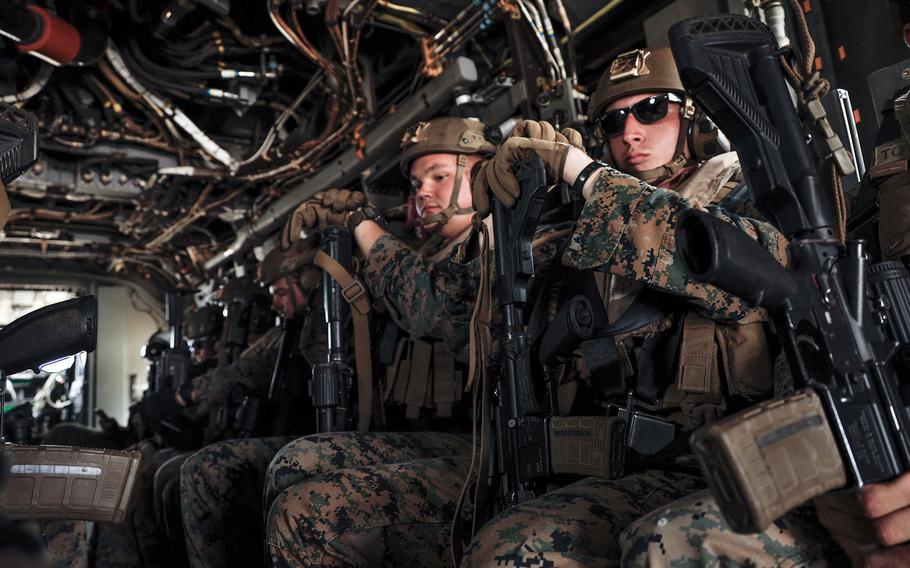 The new Marine littoral regiment, typically about 2,000 Marines, could be established by 2025, the Yomiuri Shimbun reported Tuesday. The unit will reportedly not add to the total number of Marines on Okinawa.

Around 18,000 Marines, sailors and their families already live on Okinawa, according to the Marine Corps Installations Pacific website.

The unit, if the plan moves forward, will be the second of three proposed for the Pacific, according to Yomiuri. The first, the 3rd Marine Littoral Regiment, was launched in Hawaii in March.

The littoral regiments are a key tenet of Marine Corps Commandant Gen. David Berger’s Force Design 2030 modernization effort. They are designed to thwart long-range precision fires by moving quickly and stealthily over land and sea.

The new Okinawa-based littoral regiment is reportedly on the agenda for talks Wednesday in Washington, D.C., by the Japan-U.S. Security Consultative Committee, or 2+2, according to Yomiuri. The committee is composed of Defense Minister Yasukazu Hamada and Foreign Minister Yoshimasa Hayashi of Japan and U.S. Secretary of State Antony Blinken and Defense Secretary Lloyd Austin.

The Japanese government is expected to agree to the plan, Yomiuri reported. It said Guam is reportedly being considered for the third planned littoral regiment.

“We anticipate an opportunity to provide local comment in the coming week,” he said.

Japan’s Ministry of Defense did not respond to questions about the proposal emailed by Stars and Stripes on Tuesday.

Hirokazu Matsuno, Japan’s Chief Cabinet Secretary, declined to comment when asked about the Tuesday report during a press conference at the prime minister’s office in Tokyo.

A spokesman from Okinawa prefecture’s base countermeasures department declined to comment by phone Tuesday, saying the department was not yet notified about a new Marine unit.

The Chinese military in recent years has increased its presence in the East and South China seas and stepped up exercises around Taiwan and Japan’s Nansei island chain, which stretches southwest from the main islands of Japan. China’s coast guard has confronted the Japan Coast Guard in the waters claimed by Japan around the Senkaku Islands northeast of Taiwan.