‘I hope he hasn’t died in vain’: Staff sergeant arraigned at Parris Island in Marine’s death 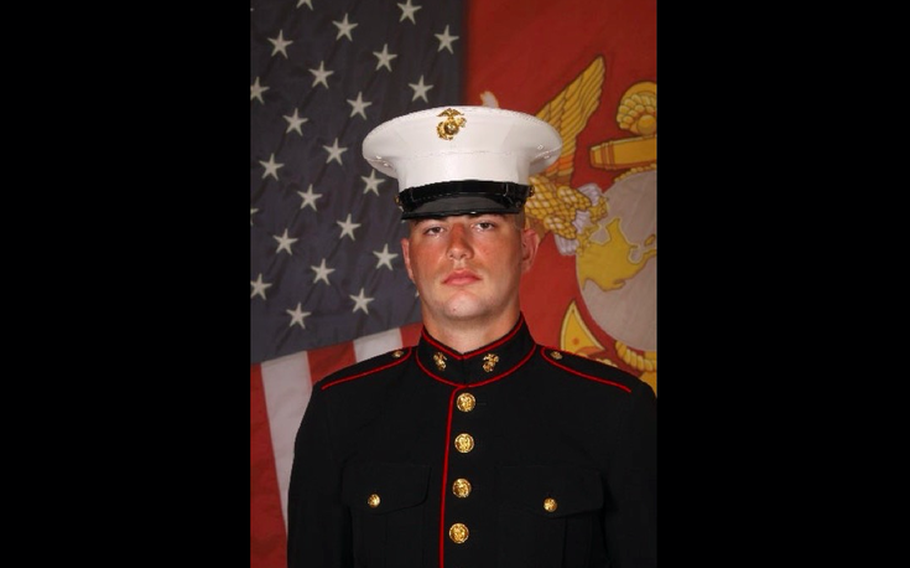 Dalton Beals died June 4, 2021, during the Crucible, a rite-of-passage held during week 10 of recruit training at Parris Island, when recruits march 48 miles over 54 hours carrying up to 45 pounds of gear through 36 stations and problem-solving exercises. (U.S. Marine Corps)

PARRIS ISLAND, S.C. (Tribune News Service) — The senior drill instructor accused of negligent homicide in the 2021 death of Marine Pfc. Dalton Beals did not enter a plea during an arraignment Wednesday at the Marine Corps Recruit Depot on Parris Island.

Staff Sgt. Steven T. Smiley was charged on Nov. 10 with negligent homicide; dereliction of duty resulting in death; cruelty, oppression, or maltreatment of subordinates, and obstruction of justice, according to previous reporting by the Island Packet and Beaufort Gazette.

Smiley was Beals’ platoon leader when Beals died on June 4, 2021, during the Crucible — a 54-hour hike and final test of endurance that caps recruits’ 13 weeks of basic training on base.

The case has been assigned to the highest level of Marine court martial with Judge Lt. Col. Adam Workman presiding. A possible trial date in April was proposed Wednesday by attorneys, but that has not been officially approved.

At the arraignment hearing on the base, Smiley chose to be represented by a government-appointed attorney, Capt. Brentt McGee, and individual counsel of his own choosing, Capt. Keagan Riley.

Smiley was also presented with the option of having a judge or jury, comprised of six to eight other military officers, decide sentencing if he is found guilty. Smiley did not make a decision in court Wednesday.

There was no pre-trial confinement for Smiley and, since the investigation, he has continued to work on the base, though he is no longer training recruits, MCRD Parris Island spokesperson Chief Sworn Officer Bobby Yarbrough said Wednesday.

Smiley’s charges come after a command investigation and line of duty determination found that the death of 19-year-old Beals, of Pennsville, N.J., could have been avoided with better supervision and leadership during the Crucible.

The temperatures that day were in the 90s and Beals, along with at least two other recruits, passed out with heat injuries. Beals’ fellow recruits noted in the report that he was “out of it” during the training.

Beals was missing for at least an hour before he was found on Page Field, where he had collapsed without a pulse. He could not be revived.

His cause of death was ruled in an autopsy as hyperthermia, meaning his body temperature was abnormally high. Smiley is accused in the report of increasing the difficulty of training despite the heat. Recruits in Beals’ class were ridiculed and discouraged from seeking medical assistance.

Recruits reported to investigators being called “dehumanizing” names and being mocked when trying to seek out medical attention. Before the crucible, trainees said they would not bring concerns to their senior drill sergeant because they perceived him as not caring “at all.”

“While his performance as a senior drill instructor appeared to improve somewhat throughout the cycle,” investigators said in the report, “during the Crucible he demonstrated little leadership over his team, and at times appeared disinterested in leading or supervising them.”

‘Hopefully it makes a change’

Beals was the youngest son of Melvin Beals and Stacie Beveridge Beals. His father was on base Wednesday to attend the arraignment.

“It’s part of the process,” Melvin Beals told the Island Packet and Beaufort Gazette. “Our hope is that something good comes out of this to stop it from happening again.”

Beals’ mother, back home in New Jersey, was driving Wednesday to Wreaths Across America, a national organization that organizes the placement of wreaths at the graves of veterans, to get a wreath to place on her son’s grave.

Since her son’s death, Beveridge Beals told The Island Packet and Beaufort Gazette, she has been lobbying for changes in the military, specifically with the Feres Doctrine, a law that prevents veterans and their families from suing the government for deaths or injuries incurred during service.

“This needs to happen and it’s taken a long time; I’m trying to be patient,” she said Wednesday of the lengthy investigation process. “I understand they (prosecutors) want to get it right and get the evidence. I hope it sets a new standard.”

Beals’ death is one that has been felt by an entire community in southwestern New Jersey where he grew up. He had been known for his kindness and athletic ability. His choice to join the Marines was spurred by his idea of them being the “toughest,” his mother previously told the newspapers.

She hopes his death will be a way to create policy changes for service members in training.

“I keep hearing of similar things happening (in the military), though not to this extent (fatal),” Beveridge Beals said. “I hope he hasn’t died in vain. Hopefully it makes a change in the military.”