Marines on Okinawa ready to bring 3D printing to the fight A Marine watches the monitor as a FARO 3D scanner captures the dimensions of a mirror bracket for a 7-ton truck inside the new expeditionary fabrication shop at Camp Kinser, Okinawa, on July 13, 2022. (Matthew M. Burke/Stars and Stripes)

CAMP KINSER, Okinawa – The Marines on Okinawa are ready to test a 3D-printing unit in shipping containers made to drop into austere locations like jungles to fill supply-line gaps.

“The intent is to supplement the supply chain and return whatever piece of equipment it is back into the fight as fast as possible,” Gunnery Sgt. Quincy Reynolds said Wednesday. Reynolds is fabrication staff non-commissioned officer-in-charge of the unit.

The mobile printing units fit into the Marines’ current warfighting doctrine that emphasizes rapid movement and reduced demand on supply lines, according to the Marine Corps’ Force Design 2030. 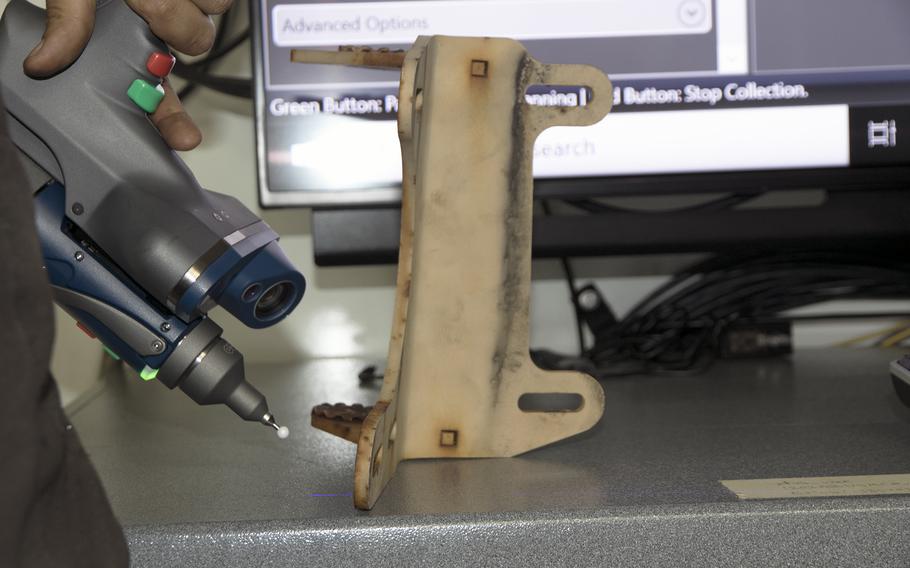 A Marine uses a FARO 3D scanner to capture the dimensions of a mirror extension bracket for a 7-ton truck so the part can be replicated using a 3D printer at Camp Kinser, Okinawa, on July 13, 2022. (Matthew M. Burke/Stars and Stripes)

The expeditionary fabrication shop consists of three conex boxes and one towed trailer. One box houses a suite of 3D printers that can work with everything from plastics to carbon fiber and Kevlar, while the other two contain lathes and mills to whittle down pieces of metal into a desired shape, a process called subtractive manufacturing.

The largely self-sufficient trailer features a futuristic FARO 3D scanner that uses lasers almost like sonar to map out the contours of a part, which dramatically reduces design time. An expeditionary fabrication shop, seen here July 13, 2022, at Camp Kinser, Okinawa, contains a suite of 3D printers that can be dropped into austere locations. (Matthew M. Burke/Stars and Stripes)

The module is the second of its kind, Williams said. The first was fielded by the 2nd Maintenance Battalion in North Carolina in 2018, though it’s not as advanced as the one in Okinawa.

Ten Marines can operate all the equipment in the field, Williams said. The trailers collapse into standard 8-by-20-foot shipping containers that can be transported by boat, on a heavy-duty logistics truck or on a 7-ton truck. It can be set up in as little as 30 minutes.

The III Marine Expeditionary Force plans to field the unit sometime in fiscal 2023, which begins in October, he said.

Inside the air-conditioned trailer, parked in front of a Camp Kinser warehouse, machinist Cpl. Cleveland Rolle, 21, from Wisconsin, watched Wednesday as a junior Marine used the FARO scanner, which looks like a gun attached to a movable arm, to capture the dimensions of a mirror extension bracket for a truck. A transportation unit asked for the part because it was unavailable through supply, Williams said.

“Scanning is probably the coolest part,” Rolle said. “I’m excited to go for the first [deployment] but at the same time it comes with a lot of added stress.”

The equipment is expensive and fragile. There are some restrictions on what the unit can produce, and the Marines must seek approval before they introduce a new part, Williams said.

However, they’ve already made covers for the Mk153, a portable, shoulder-launched assault rocket, along with truck parts, door hinges, camera caps and caps for water trailers.