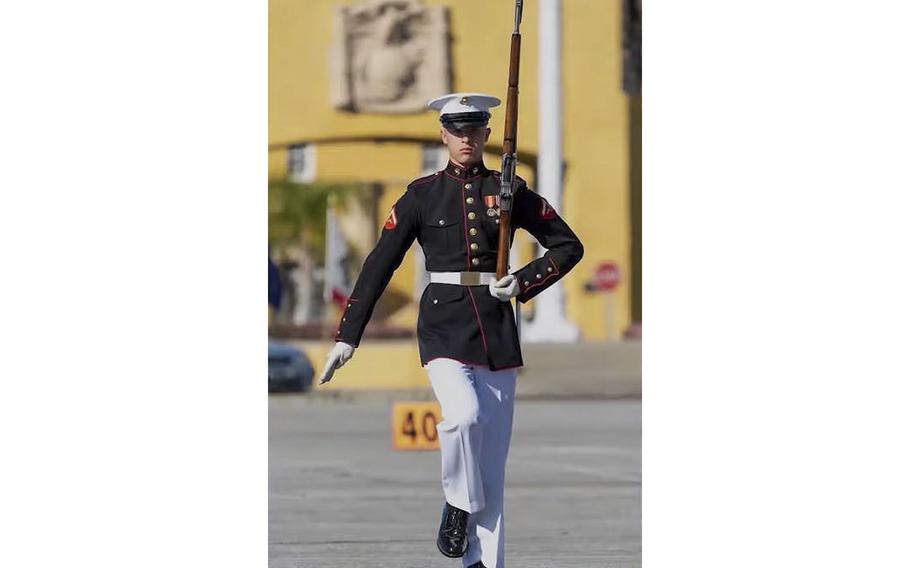 A video screen grab shows Lance Cpl. Davis Mosqueda, a member of the U.S. Marine Corps Silent Drill Platoon, before he was killed while on vacation in his hometown of Boise, Idaho, on Dec. 30, 2020. (Defense Flash News/YouTube)

BOISE, Idaho  (Tribune News Service) — The man who shot and killed a Boise Marine in December 2020 will spend up to 40 years in prison, an Ada County district judge decided Friday morning, but he could earn parole by the end of 2035.

Arnold pleaded guilty in April to second-degree murder in the death of Lance Cpl. Davis Mosqueda. Stars and Stripes reported that the 20-year-old Marine was home on leave and visiting friends at a Boise apartment on Dec. 30, 2020, when he left to check on a friend in the parking lot. Arnold shot Mosqueda multiple times, and Mosqueda died after being transported to a local hospital.

Mosqueda was quickly climbing the Marine Corps ranks before his death, his father, John Mosqueda, told the Idaho Statesman. Mosqueda enlisted at 17 years old and was stationed at Marine Barracks Washington, D.C., as part of the Marine Corps Silent Drill Platoon, which performs military drills in complete silence.

In victim impact statements in court Friday, Mosqueda’s parents told Miller that their son’s murder was “senseless and ridiculous.”

“(Arnold) stole his life, he stole his career and he stole from this family,” said Mosqueda’s mother, Monica. “The fact that (Arnold) doesn’t feel his future should be forever marked by this is unfortunate, because our lives are forever marked. Davis is gone.”

In his own statement in court, Arnold expressed his remorse to the Mosqueda family.

“There’s not a day that goes by that I don’t regret my actions,” Arnold said. “I could’ve done something different. I wish I had.”

John Mosqueda told the Statesman that his family felt the sentence was far too lenient.

“My son didn’t do anything wrong,” he said.