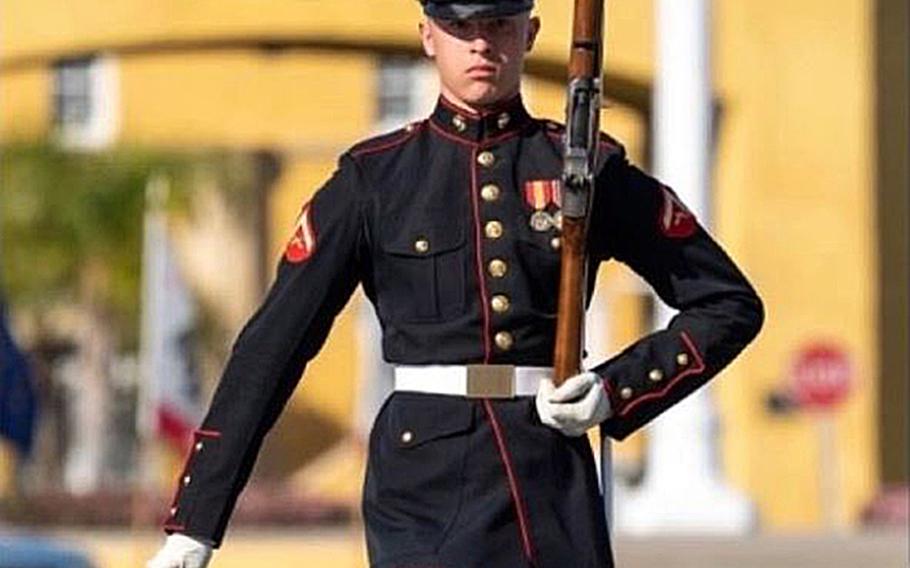 Lance Cpl. Davis Mosqueda was shot and killed while on leave in his Idaho hometown last week. He was a member of the Marine Corps' high-profile silent drill platoon. (GoFundMe )

A 20-year-old Marine who was shot and killed while on leave in his Idaho hometown last week was a member of the service’s high profile silent drill platoon.

Lance Cpl. Davis Mosqueda was with a group of friends at an apartment in Boise on Dec. 30 when Devon Arnold, the suspect in the fatal shooting, showed up just after 1 a.m., the Boise police said in a statement.

Mosqueda left the apartment to check on a friend when he was shot near the parking lot, the police said.

The young Marine was taken to a hospital with multiple gunshot wounds, Ada County coroner Dotti Owens said in a statement last Thursday, but efforts to save him failed and he was pronounced dead in the emergency department.

“I didn’t believe it,” Mosqueda’s mother, Monica Mouw, told KTVB television news. “I was positive they had made a mistake and that it was someone else.”

Mosqueda enlisted in July 2018 and had been stationed at Marine Barracks Washington, D.C., since February of the following year, where he was a member of the U.S. Marine Corps Silent Drill Platoon, the Corps said in a statement.

He had arrived home on Dec. 23 and spent the days leading up to his death playing video games with his brothers, his mother told KTVB. He was scheduled to return to Washington on Jan. 4, the station said.

Arnold, 21, stayed on the scene after the shooting and was arrested and booked into county jail after a police investigation, officials said. He has been charged with first-degree murder and use of a firearm in the commission of a felony, Ada County court records show. A preliminary hearing is set for Jan. 8.

Investigators have not said what his motive was or whether he and Mosqueda knew each other, KTVB reported. The Boise police did not immediately respond to a Stars and Stripes request for information.

Col. Teague Pastel, commanding officer of the Marine barracks, described Mosqueda as “a highly driven Marine with a team-first mentality.”

“We are tremendously saddened by this terrible loss,” Pastel said. “Our thoughts and prayers are with Davis’s family and friends, and our priority will be taking care of them during this tragic time.”

He was a “son, brother, cousin, nephew, grandson, great-grandson and adoring boyfriend” who liked to spend time hunting, fishing and exploring with his family, said a GoFundMe page established for Mosqueda’s family. “He is loved and loved us well.”

He joined the Marines because he believed in a bigger purpose, his mother said.

“He was put on this earth to help people and he’s gone too soon,” she said. “He always walked around like he had this big tough shell but he had the biggest heart [of] anyone in his circle.”