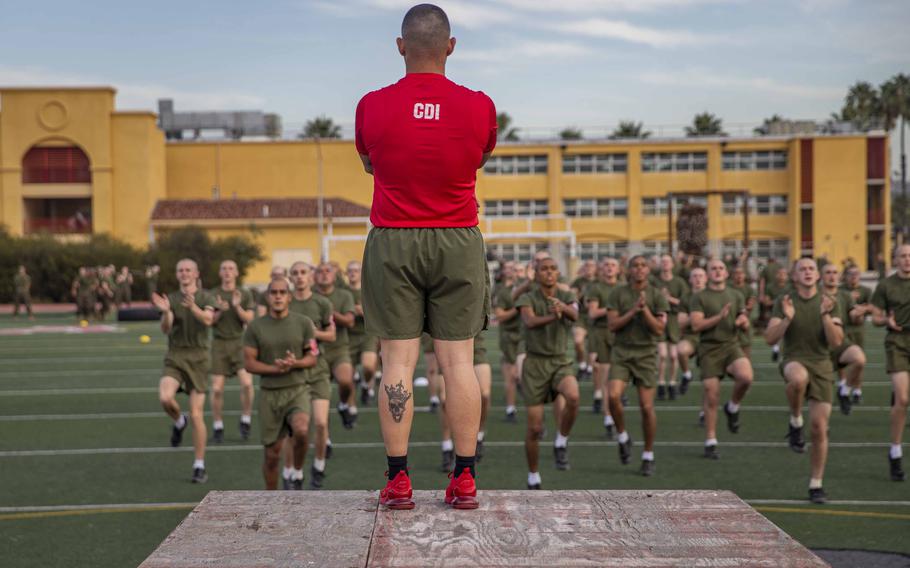 SAN DIEGO (Tribune News Service) — When Marine Brig. Gen. William Pendleton raised the first American flag 100 years ago at what would eventually become the Marine Corps Recruit Depot in San Diego, the city was still a small border town with a population of around 75,000. The Navy had previously established an air field on North Island, but the city’s destiny as a military and defense hub was still uncertain.

It was the advocacy of Pendleton, city leaders and Rep. William Kettner that put San Diego on the path to being the city it is today, said Ellen Guillemette, a historian at the depot’s museum.

Kettner “recognized San Diego would not be able to develop itself,” Guillemette said. “He felt the best way to get San Diego on the map and get federal money here was to get military bases. He realized that San Diego could serve as a hub for the military and that would provide a big influx of federal dollars.”

Kettner also foresaw the many industries a military presence would bring to the region.

“He knew it would invite other growth industries along with it,” Guillemette said. “He was really visionary in that.”

Recruits spend 13 weeks at boot camp — most of it in San Diego, though a few weeks are spent training at Camp Pendleton. Marines who trained at the depot went on to fight in some of the most storied battles in American history, including Guadalcanal and Iwo Jima, and in its most recent conflicts in Iraq and Afghanistan.

Among the challenges San Diego faced at the start, especially stacked up against its better-established competition to the north in San Francisco and Los Angeles, was geography. With a shallow harbor and surrounded by mountains, city leaders knew they’d have trouble attracting private investment, said Karl Zingheim, a historian at the USS Midway Museum.

“We have a harbor to nowhere since we’re cut off by concentric rings of mountains,” Zingheim said. “If anybody’s going to make the harbor deeper, it’s going to have to be the federal government.”

Marines had been housed in temporary camps at North Island previously as San Diego became a jumping-off point for the Corps, then based near San Francisco, after the Mexican revolution of 1910 and other interventions in Central America. A Marine regiment, led by Pendleton, was later assigned to the Panama-California Exposition in Balboa Park in 1915.

That year, San Diego voters overwhelmingly approved the transfer of tidelands then called “Dutch Flats” to the Marine Corps, according to a history of the base published by its museum in 1997.

Construction was delayed by World War I. In 1919, after the flats were dredged, officials broke ground on the new base and, on Dec. 1, 1921, Pendleton and his Marines moved in.

The administration building, barracks and arcade were designed in the Spanish Colonial Revival style by architect Bertram Goodhue, who also was responsible for El Prado in Balboa Park as well as the building that now houses the Museum of Us.

The base began as an advanced expeditionary base for the 1st Battalion, 7th Marine Regiment, which was formed by Pendleton as a sort of special regiment in San Diego, Guillemette said. But the new San Diego Marine base’s role as an operational base was quickly supplanted by another need of the Corps: a boot camp.

In 1923, Marine recruit training was moved from a Vallejo, Calif., Navy base to San Diego. And although it was the first base purpose-built for the Corps, Guillemette said, a brief power struggle with local Navy officials delayed it from officially belonging to the Corps for another two years.

In 1924, the Marines officially took ownership of the base and it was renamed Marine Corps Base San Diego.

The establishment of the base came at a time when other military facilities were being established in the region. Naval Base San Diego was established as a destroyer base in February 1922 — just a few months after the Marine base opened. In 1923, the Navy opened its own boot camp next door to the depot.

Things picked up in the mid-1920s, Zingheim said, when the Navy recognized its next big naval adversary was the Japanese and it started shifting focus to the Pacific. Three early aircraft carriers — the Langley, the Lexington and the Saratoga — were moved to San Diego.

But it was the attack on Pearl Harbor that led to the city becoming the metropolis it is today.

“It was really a boomtown in San Diego after Pearl Harbor,” Zingheim said. “With all those people, we needed the infrastructure to keep up. President Franklin Delano Roosevelt accelerated plans to divert water from the Colorado River, and the power grid, to here.”

World War II saw the establishment of Camp Pendleton, north of Oceanside, which gave the Marines room to maneuver after their old training terrain in Mission Valley and elsewhere was swallowed up by the growing city.

The recruit depot also surged during the war. The Marines installed several quonset huts to house all its recruits, buildings that stood throughout the wars in Korea and Vietnam until the current barracks were built in the 1970s.

Zingheim said the depot is a “survivor,” since many military facilities were closed as cities grew around them.

One such base, Camp Matthews, served as the rifle and gun range for recruits in San Diego. Camp Matthews, which occupied a large swath of land northeast of La Jolla, was eventually turned over to the University of California in the 1960s. The Marines moved their ranges to Camp Pendleton. What once was Camp Matthews is now UC San Diego, the Veterans Affairs Medical Center, parts of University City and Interstate 5.

The Navy consolidated its recruit training bases in the 1990s, closing its San Diego and Orlando boot camps in favor of just one in Great Lakes, Ill. Its former San Diego boot camp is now the site of Liberty Station.

“It’s remarkable the Marines were able to retain the base,” Zingheim said, adding that since the depot buttresses the airport, there’s been pressure to find a way to expand the airport.

The base continues to make history. In 2021, the first female Marine recruits completed boot camp at the depot. Until then, women were exclusively trained at the Corps’ East Coast depot at Parris Island, S.C.

The MCRD Command Museum is opening an exhibit to mark its centennial, Guillemette said, but the ongoing pandemic has limited how much it can do. A Marine Corps spokesman said the base does open to the public for its recruit graduations and that people can visit the museum on those days.

A Naval Base San Diego spokesperson said the base is planning a year-round celebration of its centennial beginning in the spring of next year. 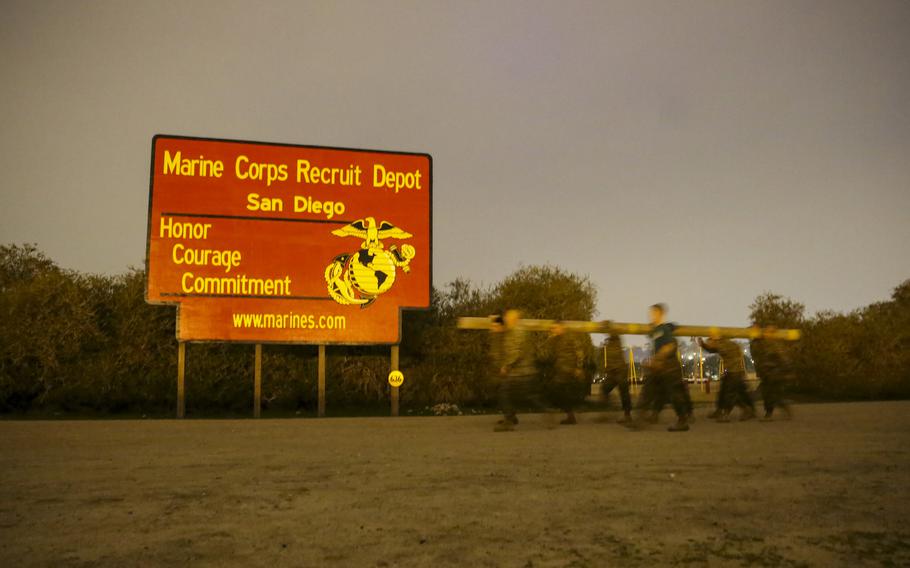 Marines of Support Battalion make their way across the back trail of the three-mile course during the log race at Marine Corps Recruit Depot San Diego. (U.S. Marine Corps)