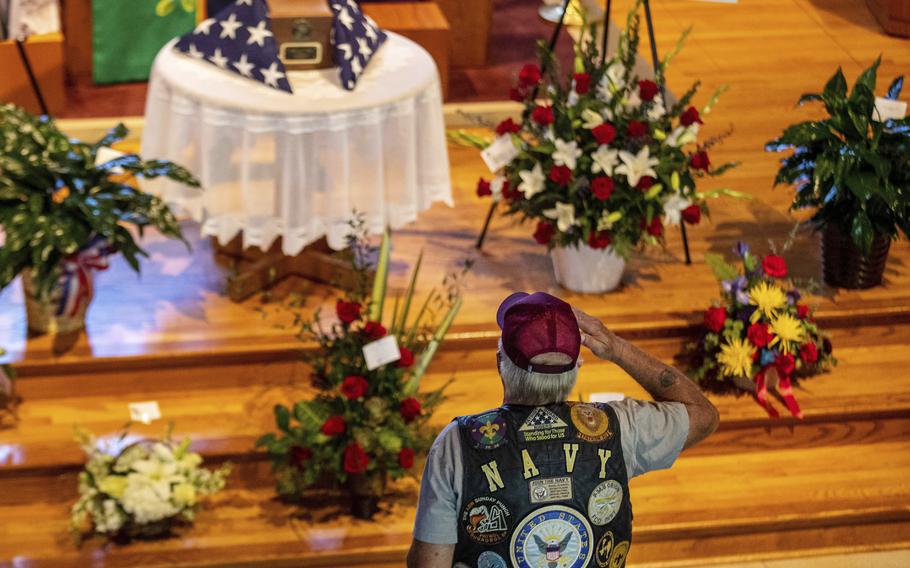 In this Thursday, Sept. 16, 2021, photo, David Gibbs Sr. salutes during the public visitation for Marine Cpl. Daegan Page at St. Paul Lutheran Church in Omaha, Neb. Gibbs, a Navy veteran, served 26 years. Cpl. Page was one of 13 U.S. service members killed Aug. 26 in a suicide bombing at the Kabul airport during the U.S. evacuation from Afghanistan. (Chris Machian, The Omaha World-Herald/AP)

OMAHA, Neb. — An Omaha Marine killed last month in Afghanistan was remembered at his funeral Friday as a hero who died while trying to help others.

The Rev. Suzanne Howe recalled Bible scripture in describing the actions of Marine Cpl. Daegan Page, who was one of 13 U.S. service members killed Aug. 26 in a suicide bombing at the Kabul airport. The blast also killed at least 169 Afghans and came as people were desperately trying to board planes to leave amid the Taliban takeover of the country.

“Jesus Christ stood in the breach between good and evil, life and death for all of mankind,” Howe said. “On the day Daegan Page lost his life, he stood in that breach for as many of his fellow human beings as he could.”

After the service, Page’s remains were taken to Omaha National Cemetery for burial.

Page, 26, was born in Omaha and lived his first five years in Red Oak, Iowa, before moving with his family to Omaha. He enlisted in the Marines in 2017 and was deployed to numerous locations, including Japan, South Korea, Australia and Jordan before his final deployment to Afghanistan.