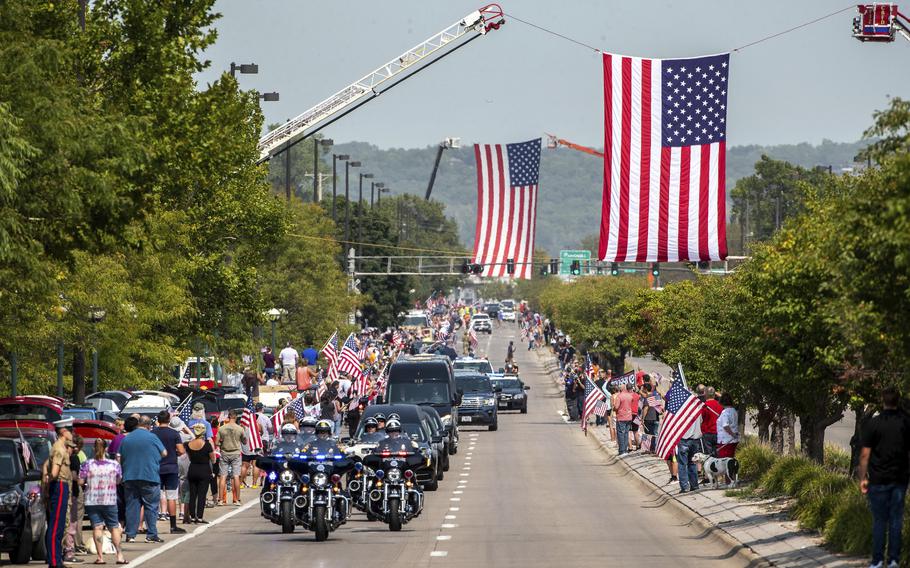 People line Abbot Drive to pay their respects to Marine Cpl. Daegan Page as the procession carrying his body drives through Omaha, Neb. on Friday Sept. 10, 2021. Page was one of 13 U.S. service members killed Aug. 26 in the bombing at the Kabul airport, which also killed at least 169 Afghans. (Chris Machian, The Omaha World-Herald/AP)

OMAHA, Neb. — Thousands of people lined the procession route along Omaha streets on Friday afternoon to pay tribute to a local man and Marine who died in a suicide bombing in Afghanistan.

The body of 23-year-old Cpl. Daegan Page was driven from Eppley Airfield to Braman Mortuary in southwest Omaha.

Page was one of 13 U.S. service members killed Aug. 26 in the bombing at the Kabul airport, which also killed at least 169 Afghans. He was born in Omaha and lived his first five years in Red Oak, Iowa, before moving back to Omaha with his family.

An obituary for Page notes he was an avid hockey fan and played throughout his childhood and was a member of the 2016 state champion Westside Warriors hockey team. Page graduated from Millard South High School in 2016.

He enlisted in 2017 with the Marines on a delayed entry program and deployed multiple times during his service, including to Japan, South Korea, Australia and Jordan before his final deployment to Afghanistan.

Page is survived by his parents and four siblings.

A memorial service will be held for Page on Sept. 17 at St. Paul’s Lutheran Church in southwest Omaha.