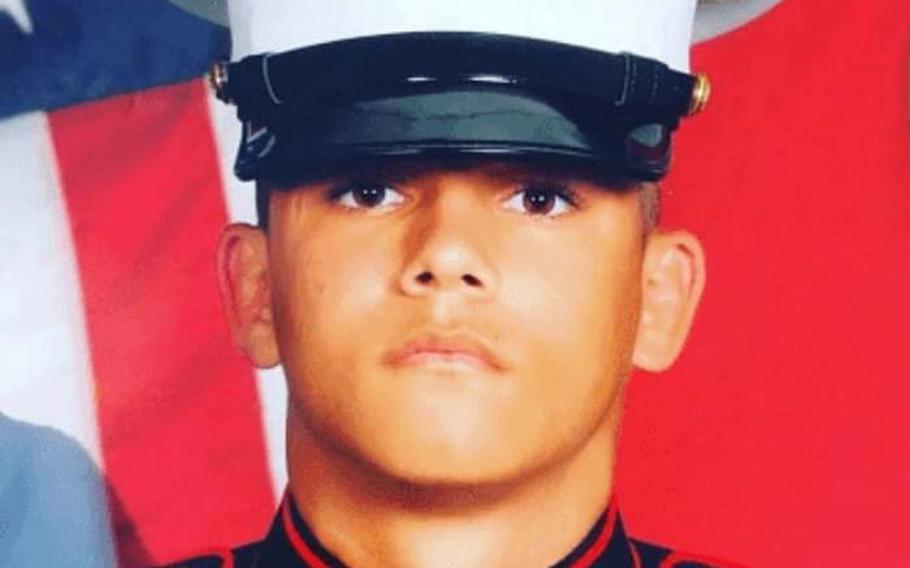 NORCO, Calif. (Tribune News Service) — As the sun dipped below the horizon behind equestrian arena grandstands, Norco grieved one of its own sons, Marine Lance Cpl. Kareem Mae'Lee Grant Nikoui, who was killed in an attack on Afghanistan's Kabul airport on Aug. 26.

Nikoui, a 2019 Norco High graduate was described as a "strong person," who "held no grudges," and had "a love for kids," Pastor Phil Wozniak said. The fallen Marine's mother told Wozniak that he'd gone back to save a child when the bomb went off.

The Saturday, Sept. 4, remembrance ceremony at George Ingalls Equestrian Event Center also honored the 12 other service members who died in that attack, including two other Marines from the Inland area, Lance Cpl. Dylan R. Merola, 20, of Rancho Cucamonga and Cpl. Hunter Lopez, 22, of Indio.

The family has had a strong presence in the city of Norco.

It was Nikoui's cousin who built the city's Gold Star mothers memorial, Norco Mayor Kevin Bash told the gathered crowd, and Nikoui was sworn into the Marine Corps in this arena. We are here to support the family, he said, "we grieve with them."

Wozniak, with Grace Fellowship Church, Bash and all the speakers, wanted to make sure the family felt the community's support. At one point Nikoui's parents, Shana Chappell and Steve Nikoui, who were seated in the front row, were asked to stand to see all who came in support of them.

The names of the 13 fallen service members were read and Larry Cusimano with the George A. Ingalls Veterans Memorial Plaza Committee performed a bell ringing ceremony.

Norco resident Kim Raze, the mother of a veteran, brought her daughter's Rottweiler Axyle to the event. "He had no idea he wasn't coming home," she said of the fallen Marine. "He gave his life and it changed his family's life forever. He's our hometown hero."

Though she doesn't know the family, Raze said being the mother of a veteran, "I know his mama. Our hearts break, we're so proud and we're so broken at the same time," she said, nearing tears. "We love him so very much."

The event ended after the sun went down with a moment of silence in the soft light of glowsticks.

The community has rallied around the family after news of the Afghanistan blast arrived.

Last week, in the hills above the equestrian arena, hundreds hiked to local landmark Pumpkin Rock to honor Nikoui.

Nikoui's mother drew national attention this week following her comments on social media about President Joe Biden, saying the president rolled his eyes when meeting with families of slain service members and that her son's blood is on his hands.

Nikoui will be brought home on Friday, Sept. 17.

The arrival at Ontario International Airport will be private for the family, however, Honoring Our Fallen encourages members of the community to line the procession route with flags to Pierce Brothers Crestlawn Mortuary in Riverside.

From the airport around noon, the Fallen Hero Procession will go south on Vineyard Avenue, left onto the eastbound 60 Freeway, south on the 15 Freeway, left onto Sixth Street in Norco, left onto California Avenue, and right onto North Drive/Arlington Avenue. The mortuary is at 11500 Arlington Ave.

Funeral services will be held at a later date.

Other vigils and tributes for the fallen Marines are planned in the coming days.

— A classic car and truck cruise is planned for 10 a.m. Sunday, Sept. 5, at TGI Fridays, 2795 Cabot Drive in Corona. The 28-mile course through Corona, Riverside and Norco was organized by Performance Online, and participants are encouraged to display U.S. flags. Donations to support the family of Nikoui will be collected at the event.

— A memorial march is set for 3:45 p.m. Sunday, Sept. 5, in San Clemente to support Camp Pendleton Marines. The march will move from El Camino Real down Avenida Del Mar to Park Semper Fi near the Pier Bowl. Names of the fallen will be read.