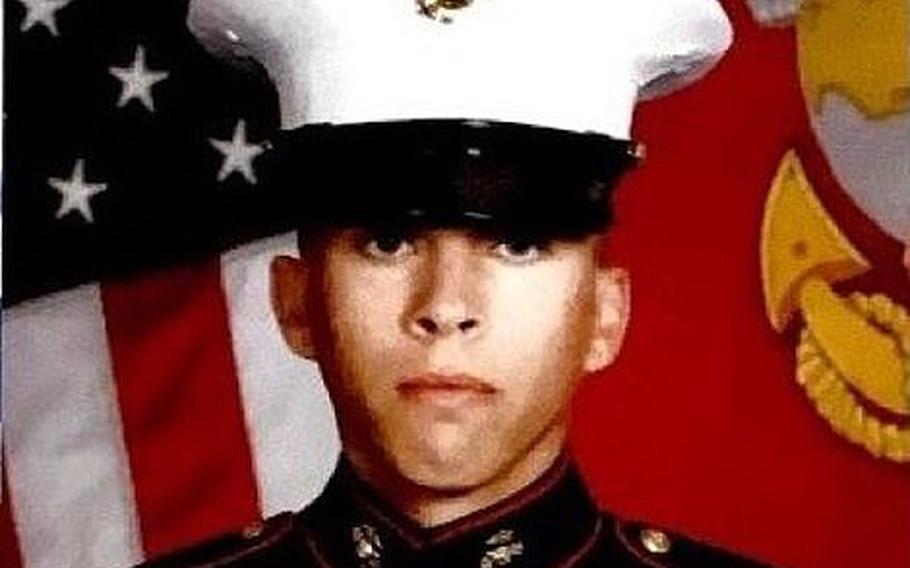 Merola, who was raised in Rancho Cucamonga, was one of three Marines from the Inland Empire who died in the bombing. The other two were Lance Cpl. Kareem M. Nikoui, of Norco, and Indio resident Cpl. Hunter Lopez, the son of Riverside County sheriff's Deputy Alicia Lopez and Capt. Herman Lopez.

Speaking to those gathered Thursday, Merola's mother, Cheryl Rex, shared through tears that her son always wore military attire as a child.

"He wanted nothing more than to become a Marine," Rex recalled. "He joined the Marine Corps and proudly served his country to the highest degree."

Rex spoke shortly after the memorial vigil began at Central Park's Freedom Courtyard. The gathering was co-hosted by the city of Rancho Cucamonga and Los Osos High School, where Merola graduated in 2019.

"We have a bond that never goes away," Rex said of her military family and the Marines. "I know Dylan would say that he is always with us. Dylan touched the lives of so many people, doing exactly what I know (he) wanted to do: make a difference in this world."

Previously, Rex has said that her son had been stationed in Kabul for less than two weeks. He was planning to go to college and study engineering.

Shortly before the vigil, as the sun set, mourners gathered around a table hosted by the Boy Scouts Troop 66 to write cards, sharing stories and memories of Merola.

Connor Labajo, a Los Osos High choir member, opened the vigil in front of a tearful crowd singing "Amazing Grace" and "You Raise Me Up." Students also honored Merola during the school's first Grizzlies football game of the season.

Randy Shorts, a teacher at Los Osos, shared with mourners memories of Merola as a "shy, always smiling" student in his theater class, always dressed in a black shirt and red tie while leading tech for school performances.

"Dylan wanted to join the Marines because he wanted to learn discipline, and to make a difference," Shorts said. "As I look at the thousands who have left Afghanistan, and as I look around here tonight, I think Dylan made a difference."

Dakota Mancuso shared his pride in his best friend.

"When he joined the military I knew that he was going away, but I didn't imagine that he wasn't going to come back," Mancuso said. "I know you were going out for a purpose, I could never have imagined what purpose found you in Afghanistan. I'm so proud, humbled and inspired by you. You saved so many people and I'm so proud of you for that."

Hundreds turned out for the ceremony — many of those gathered knew Merola but others were there to honor a man they'd never met.

Dennis Larkin from Fontana called the attack in Kabul "a national tragedy." He said he joined the vigil to "show support to the men and women in arms, those who risked their lives for us; to show that we love and care for them."

Pomona City Councilman Robert Torres brought his son, Julien, 6, to the vigil "to show him why it's important to honor these (service members) and the commitments they made to this country. It's a sad but proud moment, to see the community come together. We hope Julien will be as brave as Dylan was."

Rancho Cucamonga will honor Merola at a future City Council meeting with an Armed Forces banner display, embellished with a gold star. Michael told the audience Thursday the gold star "reminds us of our debt to those who choose to put ourselves on the line."

The names of the 13 fallen service members were read by Rancho fire Chaplain Pastor Mike Eddy, followed by a bell-ringing tribute and a moment of silence.

Other community vigils and tributes for the fallen Marines are planned in the coming days.

— The city of Norco will hold a remembrance ceremony in honor of Nikoui beginning at 7 p.m. Saturday, Sept. 4, at the George Ingalls Equestrian Event Center, 3737 Crestview Drive, Norco.

— A memorial march is set for 3:45 p.m. Sunday, Sept. 5, in San Clemente to support Camp Pendleton Marines. The march will move from El Camino Real down Avenida Del Mar to Park Semper Fi near the Pier Bowl. Names of the fallen will be read.

— A classic car and truck cruise is planned for 10 a.m. Sunday, Sept. 5, at TGI Fridays, 2795 Cabot Drive in Corona. The 28-mile course through Corona, Riverside and Norco was organized by Performance Online, and participants are encouraged to display U.S. flags. Donations to support the family of Nikoui will be collected at the event.