‘You could see how passionate she was’: Family, community honor Sgt. Nicole Gee, killed in Kabul attack 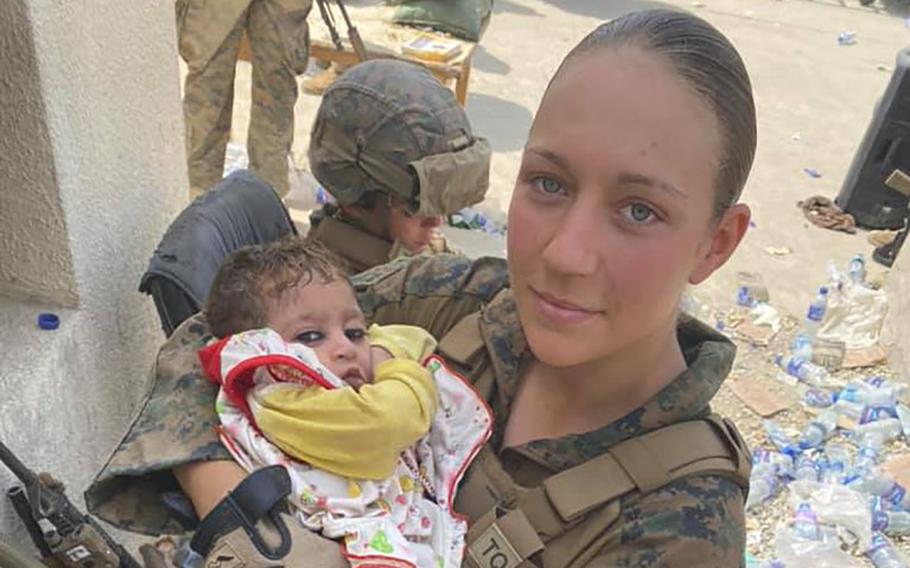 Marine Sgt. Nicole Gee, shown here in a photo posted to social media, was one the 13 U.S. military service members killed in a suicide attack at Kabul’s Hamid Karzai International Airport on Aug. 26, where they worked to help evacuate Americans and Afghan refugees. (Instagram)

ROSEVILLE, Calif. (Tribune News Service) — Richard Herrera's voice shook as he looked out at the crowd of more than 1,000 people who gathered in Roseville Tuesday night to honor his daughter, Marine Sgt. Nicole Gee.

She was one the 13 U.S. military service members killed in a suicide attack at Kabul's Hamid Karzai International Airport on Aug. 26, where they worked to help evacuate Americans and Afghan refugees.

Her death hit home in Placer County, where she grew up and graduated from Oakmont High School.

"I can't believe that little girl has got all these people together, unbelievable," Herrera said.

He spoke over a crowd in Vernon Street Town Square, where hundreds of people carried American flags and wore red, white and blue. The city organized the "hometown hero" event.

Gee's family, including her father, sister and husband sat in the front row, dressed in black. The crowd greeted them with applause and cheers as they entered the square, and they embraced friends and strangers alike who came up to them to wish them well.

Photos of Gee in Afghanistan circulated around the world after her death. One from her Instagram social media account showed her cradling an Afghan baby. The caption read, "I love my job."

"She was wise beyond her years," Herrera said. "You could see how passionate she was in those last few photos from Afghanistan."

Herrera said he saw that passion the first time he took his children skiing. Gee insisted on going down the hardest slopes.

She was "tearing it up all day," he said of his daughter.

Her first day on skis revealed her determination and her fearlessness, Herrera said, qualities that drew her to the Marine Corps and fueled her passion for her job.

"She was always self-driven, motivated, never in trouble, she was always dedicated to work, a very beautiful lady," he said.

Gee graduated Oakmont High School in 2016 with a 4.1 GPA. While there, she danced and played sports. She stayed in contact with some of her teachers, who said in comments read at the ceremony it came as no surprise to them that Gee enlisted in the Marine Corps.

Her husband, Jarod Gee, is also a graduate of Oakmont High School and a Marine.

She spent months training and preparing for boot camp before she enlisted, her friend and fellow Marine, Erin Libolt said. Gee graduated as a squad leader and was promoted to sergeant within four years, an uncommonly fast pace.

Marine Corps officials said in a news release that Gee was assigned to Combat Logistics Battalion 24, providing ground electronics transmission systems maintenance. She was promoted to sergeant while deployed in Kuwait in early August, posting photos of the ceremony to her Instagram account. In them, she stands beaming with a wide grin.

"She was joyful in her hard work, the hardest worker in the room," Libolt said.

'Proud of what she was doing in Afghanistan'

Gee's Sister, Misty Fuoco, called Gee "best friend since the day she was born," and her "role model."

"She was an amazing sister, daughter, wife, aunt, niece, cousin, friend, and she was one pretty bad ass Marine," she said, her voice thick.

She shared a memory of when Gee wrote home shortly after arriving at boot camp, saying that she had lost 12 lbs of muscle mass in bootcamp and complained she wasn't getting "enough" of a workout while there, Fuoco said, laughing.

"She was proud to be a Marine, and she was proud of what she was doing in Afghanistan," she said.

As the ceremony came to a close, people from the audience crowded around Gee's family, hugging them, shaking their hands and handing them flowers.

"She did not take the easy path in life," retired Army Brig. Gen. Bob Hipwell of Placer Veterans Stand Down, said to the crowd. "So my challenge to you, is lead a good life. We have a wonderful community here. Help each other out. Help and support this family of Nicole as they go through this tragic time."