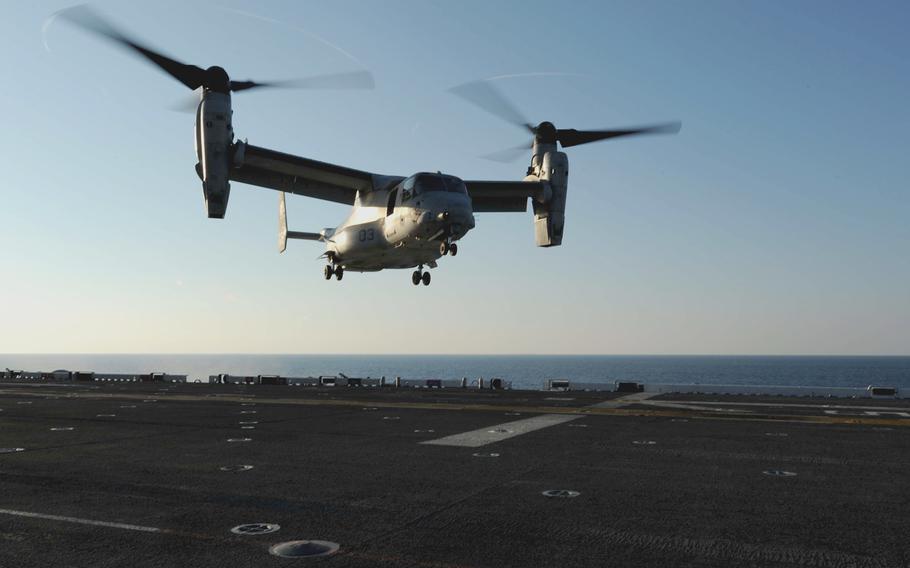 An MV-22 Osprey lands on the flight deck of the amphibious assault ship USS Bataan on Oct. 29, 2013. (Michael Lieberknecht/U.S. Navy)

CAMP FOSTER, Okinawa – The Marine Corps on Wednesday told Japanese authorities on Okinawa that two pieces that fell from an MV-22B Osprey last week were much larger than the Marines first described them.

A spokesman for the Okinawa Defense Bureau, an arm of the Japan Ministry of Defense, on Thursday said that information raised more questions.

“There was no explanation on how the mistake was made,” the bureau spokesman said. “We are currently waiting for additional information from the U.S. side.”

The Osprey crew reported a panel and a piece of fairing missing when the tilt-rotor aircraft returned around 9:30 p.m. Aug. 12 to Marine Corps Air Station Futenma in Ginowan. The crew had flown back, mostly over water, from the Central Training Area, according to 1st Marine Wing spokesman Maj. Ken Kunze on Monday.

The Marines told the defense bureau the panel measured 14 by 18 inches and the fairing measured 9 by 3, Kunze said at the time.

Wednesday, the Marine Corps corrected that information and told the bureau the panel was actually about 3 ½ by 2 ¼ feet and nearly an inch thick, a bureau spokesman told Stars and Stripes by phone Thursday. The panel is normally situated above the cockpit, he said.

He said the fairing, from the right engine cover, measures 17 by 17 inches.

The crew did not see the parts fall from the aircraft and no injuries or damage have been reported, Kunze wrote in an email to Stars and Stripes on Monday.

Okinawa Gov. Denny Tamaki said he was “infuriated” by the incident and called for an immediate cessation of flight operations at the U.S. base. The Marines declined to do so.

Prefectural officials said they were equally confused by the error.

“The panel suddenly became bigger,” a prefectural spokesman told Stars and Stripes by phone on Thursday. “Until we receive confirming information, I don’t think there is much to say.”

On Thursday, Kunze attributed the error to darkness and strict reporting requirements.

“They got back in the middle of the night, and they have to report those within a few hours,” he said by phone to Stars and Stripes. “With it being on the top, and the wing, and it was dark, that was their best estimate at the time.”

The Marines sent the correct measurements to Japanese and prefectural officials as soon as they had them, he said.

The pieces have still not been found, Kunze said. He said they were likely lost over water and may wash up on shore.

The Marine Corps is investigating the cause of the incident.