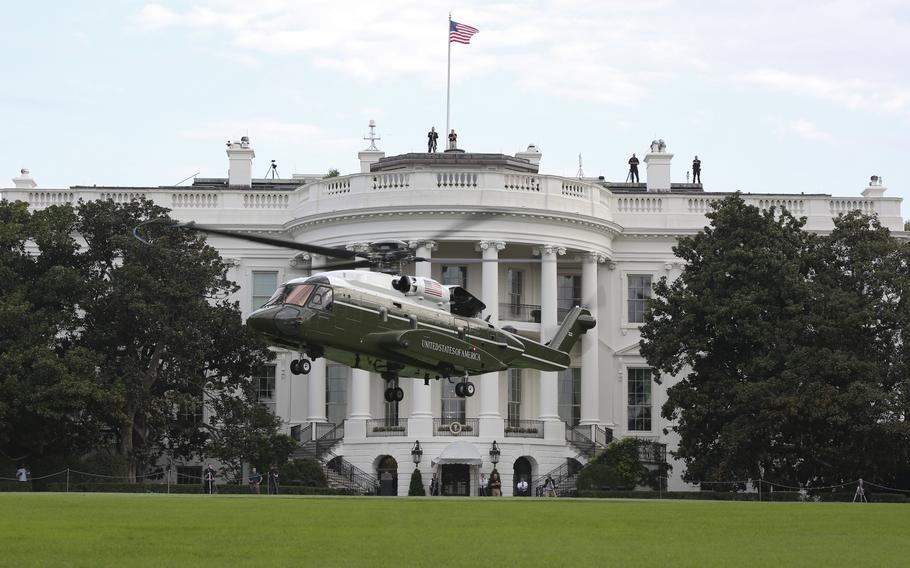 Marine Helicopter Squadron One runs test flights of the new VH-92A over the south lawn of the White House on Sept. 22, 2018. (Hunter Helis/U.S. Marine Corps)

WASHINGTON — A new kind of helicopter will soon be used as Marine One, the name given to helicopters that fly the president, a Marine Corps general said this week.

“The squadron and the program are ready today,” Masiello said. “We have enough aircraft for the initial usage, we have enough pilots that are trained, we have the support equipment — we have all that kind of stuff.”

The new helicopters will replace the Marine Corps fleet of VH-3D Sea King and VH-60N White Hawk aircraft that now transport the president, according to a June Government Accountability Office report.

The Pentagon has ordered 23 VH-92As, which cost about $217 million each, according to the report.

“The VH-92A is expected to provide improved performance, communications and survivability capabilities, while offering increased passenger capacity,” according to the report.

It’s not the first time a new Marine One helicopter program was pitched. In 2009, then-President Barack Obama directed the Pentagon to cancel plans to build 28 VH-71 Kestrel helicopters that would have cost more than $13 billion.

“The VH-92A program … superseded the VH-71 program that DOD canceled due to cost growth, schedule delays and performance shortfalls,” according to the report.

The Marine Corps is now developing how they will phase out the old helicopters and bring in the new ones and working with the White House on a commissioning program, Masiello said.

“I think that will all coalesce over the next few months and you will see the VH-92s in service shortly,” he said.