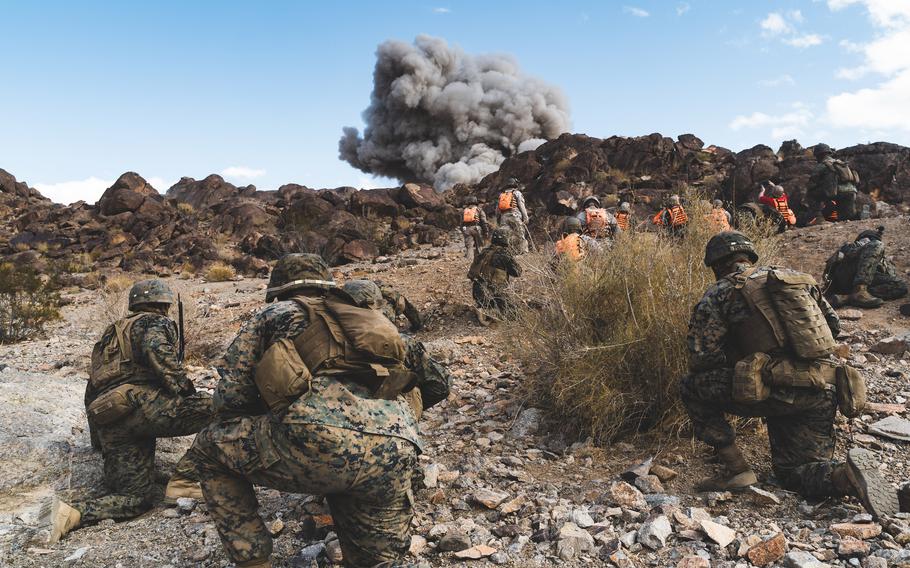 U.S. Marines detonate obstacle-breaching Bangalore torpedoes during an exercise at Twentynine Palms, Calif., in November 2019. Nearly six months after they went missing from Twentynine Palms, several pounds of C4 explosives have been recovered, an officials said, but no suspects have been arrested. (Colton Brownlee/U.S. Marine Corps)

Several pounds of C4 explosives have been recovered nearly six months after they went missing from a Marine base in California, investigators said, but no suspects have been arrested.

Military officials suspected the roughly 10 pounds of plastic explosive might have been stolen during an exercise, San Diego’s ABC10 News reported earlier this year.

Located about 150 miles east of Los Angeles in the Mojave Desert, the training installation is the largest Marine base in the world at 932 square miles. More than 11,000 Marines and sailors are stationed at the combat center, a base website says.

C4 is a powerful, pliable explosive that usually comes in thin, 1 ¼-pound blocks or packed in white plastic containers.

Some 1,900 military firearms were lost or stolen from 2010 to 2019, The Associated Press reported Tuesday in an in-depth investigation that found some of those weapons had turned up later on America's streets. While the report focused on firearms such as machine guns and automatic rifles, explosives had also disappeared, the AP reported, including armor-piercing grenades that wound up in an Atlanta backyard.