“This report is absolutely blood curdling. The idea that pistols, assault weapons, grenade launchers are missing from armories of the United States military, because they have been lost or stolen without any apparent accounting, without any reporting to Congress … is just incredibly alarming and astonishing,” Blumenthal said during a Senate Armed Services Committee hearing on the Army’s budget.

The Associated Press released the results of a yearslong investigation Tuesday that found at least 1,900 military firearms were lost or stolen during the 2010s, some of which turned up at the scene of violent crimes.

Army, Marine Corps, Navy and Air Force government records revealed pistols, machine guns, shotguns and automatic assault rifles have disappeared from armories, supply warehouses and other places where they were used, stored or transported, according to the AP report.

Blumenthal asked newly appointed Army Secretary Christine Wormuth and Gen. James McConville, the Army chief of staff, whether they would commit to investigating the issue.

“My understanding is that the cases of weapons from any branch of the services being unaccounted for and getting into the hands of civilians is likely to be a small number, but particularly given these reports, I commit to you that this is something that we will look into,” Wormuth said.

Blumenthal responded 1,900 firearms is “not exactly a small number.”

The senator also pressed whether the Army would commit to regularly reporting annual updates to Congress about missing weapons, as the Pentagon used to do. However, the requirement to do so ended years ago, according to the AP.

“I think we’d be open to a reporting requirement,” Wormuth said.

Cracks in accountability have emerged since the end of the requirement. The Army and Air Force, for example, couldn’t readily tell the AP how many weapons were lost or stolen from 2010 through 2019.

Blumenthal, quoting from the report, said: “‘The Army sought to suppress information on missing weapons and gave misleading numbers that contradict internal memos.’ Will you report back to us about that claim?”

Wormuth said she would look into how the issue has been handled in the past. The secretary, a few weeks into the job, added later that she is not familiar with the details of the AP report.

“I would certainly commit to collecting the facts,” she said.

The AP investigation, which started a decade ago, found the Army gave conflicting information, if the service gave any information at all. They pushed back against inquiries from the AP since the beginning of their investigation in 2011.

Lt. Col. Brandon Kelley, an Army spokesman, told the AP that “the service’s property inventory systems don’t readily track how many weapons have been lost or stolen.” 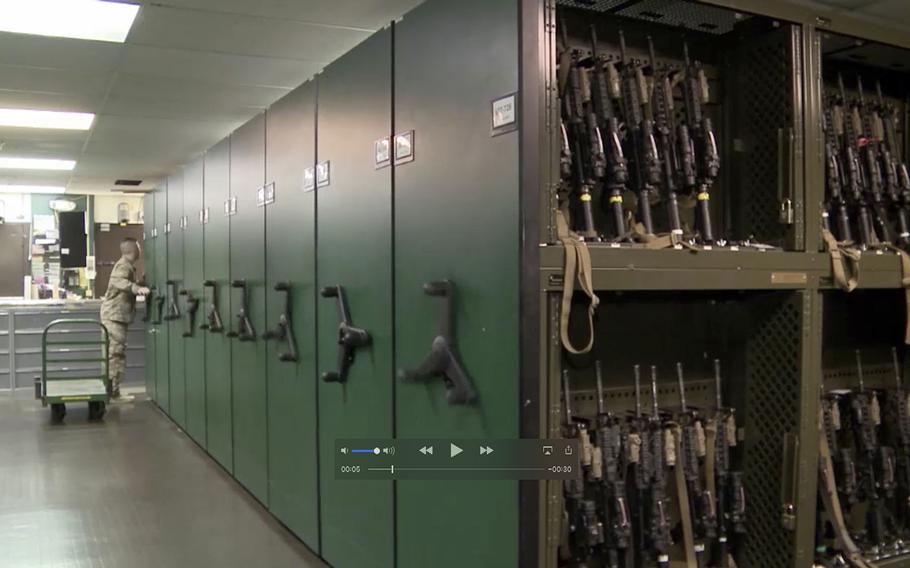 This Oct. 11, 2017, image from video made available by the U.S. Air Force shows a gun vault at the Malmstrom Air Force Base in Great Falls, Mont. (U.S. Air Force)
Sarah Cammarata