Renovated studios at AFN Vicenza welcome community members for the AFN The Eagle morning and afternoon shows at Caserma Ederle, Italy. The station now broadcasts on 105.3 FM and on the AFN Go app. (Richard Scavetta/U.S. Army)

VICENZA, Italy — After decades of inability to receive American Forces Network radio broadcasts in many cars, would-be listeners in northeastern Italy now have access to the station’s programming following a frequency change.

AFN The Eagle moved from 106 FM, a frequency unreachable on most American car radios, to 105.3 FM. The change took effect Friday following negotiations with a radio station owner, according to U.S. Army Garrison Italy.

The frequency 105.3 FM was previously used by Radio Gelosa.

Changing the frequency was part of a larger effort to “reintroduce AFN Vicenza” following staff downsizing and the effects of the COVID-19 pandemic. By October 2021, AFN Vicenza was operating just five soldiers working from a trailer and it was anticipated that the station might close, the garrison said.

Instead, AFN Vicenza remained open with increased staffing, added an afternoon show and brought in a soldier known as “DJ Dadeo” to enliven the morning show, among other changes. 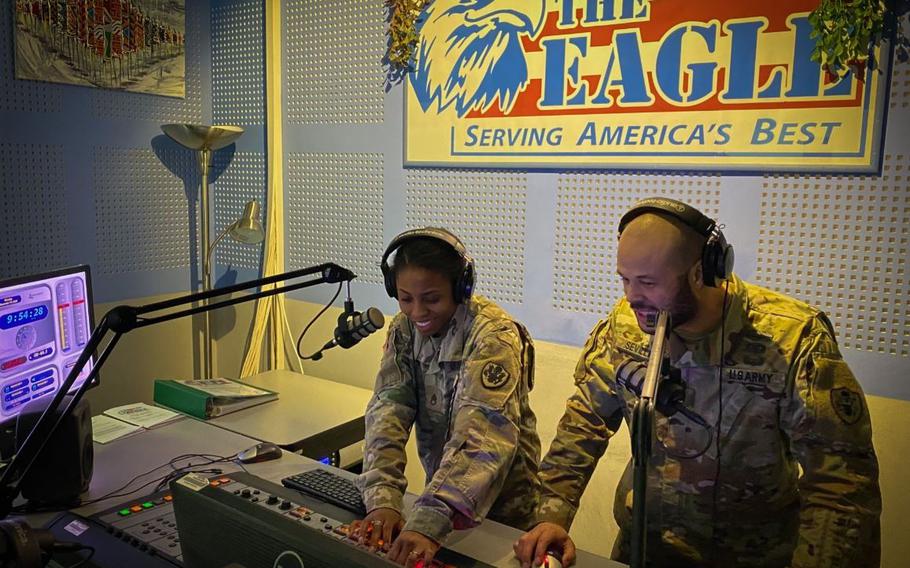 Staff Sgt. Sharifa Newton and Staff Sgt. Page Sevilla work the board at AFN Vicenza at Caserma Ederle, Italy, during a recent morning show. Their broadcasts are now heard at 105.3 FM and on the AFN Go app. (Richard Scavetta/U.S. Army)