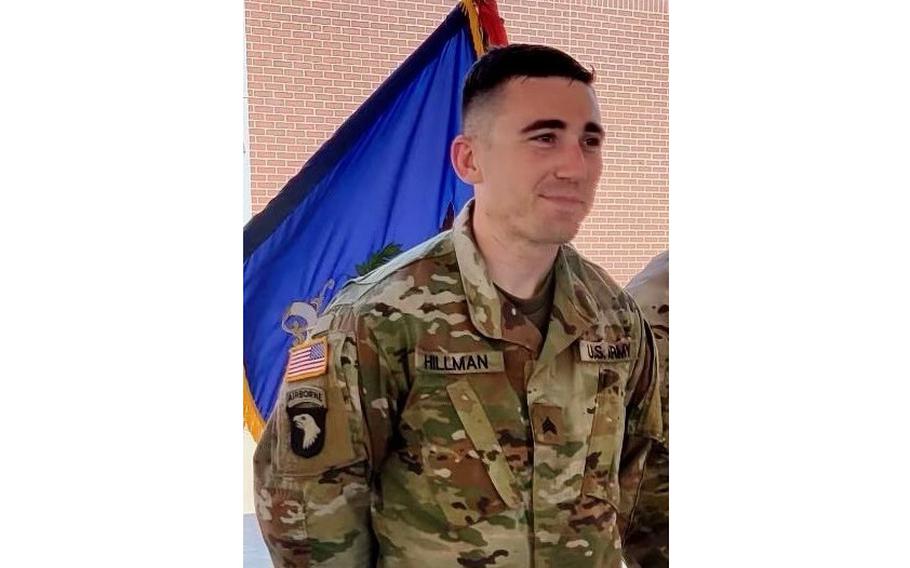 Sgt. Nathan M. Hillman, 30, of Plum, Pa., died in a shooting Monday, Dec. 12, 2022, at Fort Stewart’s 2nd Brigade Complex, said Kevin Larson, a spokesman for the Georgia installation. Hillman, pictured, was a chemical, biological, radiological and nuclear specialist who enlisted in the Army in 2015, according to the service. (U.S. Army)

A 30-year-old sergeant who had served a deployment to Afghanistan was the soldier killed in the Monday shooting on Fort Stewart, an official at the Army post in Georgia announced Tuesday.

Sgt. Nathan M. Hillman of Plum, Pa., died in the shooting Monday morning at Fort Stewart’s 2nd Brigade Complex, said Kevin Larson, a spokesman for the installation. Hillman’s assailant was captured by military police at the scene, but additional details about the suspect or a motive in the shooting have not been released.

Hillman was a chemical, biological, radiological, and nuclear specialist who enlisted in the Army in 2015, according to the service. He joined Fort Stewart’s 2nd Armored Brigade Combat Team, 3rd Infantry Division in July 2021.

"With deepest sorrow our hearts are with the families and units involved in the incident,” Diven said in a statement on Tuesday. “Providing support to the impacted families and soldiers is our first priority.”

Authorities have declined to provide any information about the suspected shooter, who was turned over to Army Criminal Investigation Division agents after his arrest by Fort Stewart law enforcement.

CID’s investigation was ongoing as of Tuesday, Larson said. Charges against the shooter had not yet been filed as of Tuesday afternoon, according to the Army.

“No additional information is being released at this time,” Larson said.

While officials have not said if the arrested suspect was another service member, Hillman’s mother, Tina Hillman, wrote in a public post Monday on Facebook that her son had been killed by “another soldier.”

“Nathan is so extremely missed beyond words,” Hillman wrote in the post. “I loved my son beyond words and would gladly take his place.”