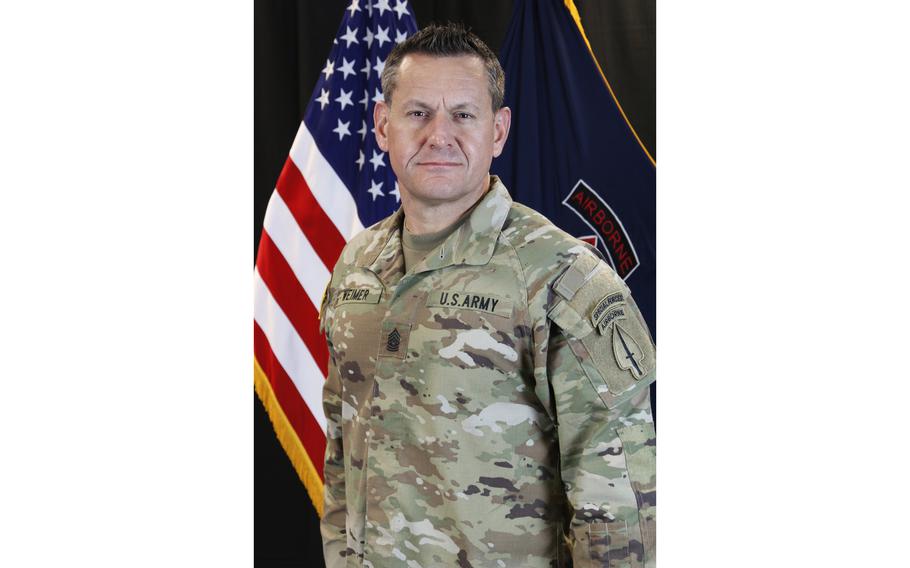 The Army has selected a Green Beret with a long history in special operations for the service’s next senior enlisted leader, Gen. James McConville, the Army’s chief of staff, announced Friday.

Command Sgt. Maj. Michael Weimer will replace outgoing Sgt. Maj. of the Army Michael Grinston in August, McConville wrote in a social media post. Grinston, the 16th sergeant major of the Army, is set to retire shortly after handing the reins to Weimer as the Army’s top enlisted soldier and key adviser on all enlisted matters to the Army chief of staff and secretary.

Weimer now serves as the senior enlisted leader for the Army Special Operations Command at Fort Bragg, N.C. He took that job last year after serving in other top enlisted roles in the special operations field in recent years.

Weimer enlisted in the Army in 1993, completed the Special Forces Selection and Assessment course in 1994 and earned his Green Beret in 1996 upon graduation from the Special Forces Weapons Sergeant Course, according to his biography. He served tours with 7th Special Forces Group at Eglin Air Force Base, Fla., and some 19 years with USASOC at Fort Bragg, including as its operations sergeant major, according to the Army.

Weimer has “served numerous tours in the U.S. Central [Command] and U.S. Southern Command areas of responsibility” among other assignments across the globe, his biography reads.

In his new role, Weimer will serve as the face and voice of the Army’s enlisted force at a time when the service is transitioning its focus from its long combat roles in the Middle East and Afghanistan toward a future where the primary concerns of leaders are the potential for major, conventional wars with power rivals such as China and Russia.

Grinston’s retirement next year will cap an about 36-year Army career. He has served as the Army’s top enlisted soldier since 2019.

He has focused much of his tenure on improving quality of life for enlisted soldiers, including recently leading efforts to improve conditions in barracks plagued with mold. It was after his own inspection in the summer of Fort Bragg’s Smoke Bomb Hill barracks that service leaders agreed to rapidly shutter the 1970s-era barracks and move soldiers elsewhere on post or into off-post housing.