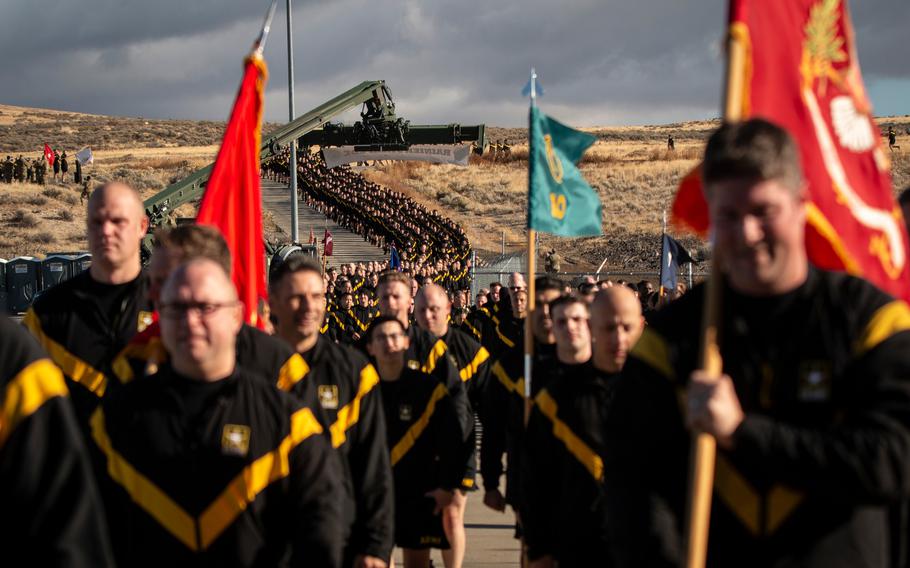 (Tribune News Service) — For the first time in more than two years, Washington Army National Guard soldiers mobilized from across the state to train, run and build team spirit.

More than 3,700 members of the National Guard came together at the Yakima Training Center over the weekend for the inaugural Rainier Stampede. The gathering, held for the first time since the COVID-19 pandemic began, featured a 5K run, leadership training and a large-scale barbecue.

It was the first time the Washington Army National Guard had attempted this scale of mobilization in at least a decade, said Joseph Siemendal, state public information officer for the National Guard.

Soldiers were able to gain recognition for themselves or their unit, Siemendal added, in competitions similar to the Army Combat Fitness Test. Cohesion and team mentality were emphasized. Siemendal said soldiers had opportunities to discuss their unit's history with Washington National Guard Museum historians.

Officers participated in leadership training. Collaboration ran from Brig. Gen. Daniel Dent, the highest-ranking National Guard officer in the state, down through the ranks.

"It will be a lot of collaboration (senior officers working with junior officers), learning about the process of mentoring, coaching and training," Siemendal said in an email. "We have many new officers, noncommissioned officers and warrant officers that have joined our ranks since the last leadership summit."

Another critical aspect of the Rainier Stampede was training for mass mobilization. Army cooks, or culinary specialists, prepared a barbecue for thousands of soldiers. This task, while common for culinary specialists deployed overseas, was a new challenge for newer members of the National Guard, Siemendal said.

Roughly half of the participating soldiers came from east of the mountains, while the other half came from Washington's west side. Individual soldiers were excused if they had prior training or commitments that prevented them from attending. The gathering was timed around the Veterans Day holiday.

"Events like these are nothing new to the military," Siemendal said in an email. "They play a critical role in building the esprit de corps within an organization."

Jasper Kenzo Sundeen's reporting for the Yakima Herald-Republic is possible with support from Report for America and community members through the Yakima Valley Community Fund.