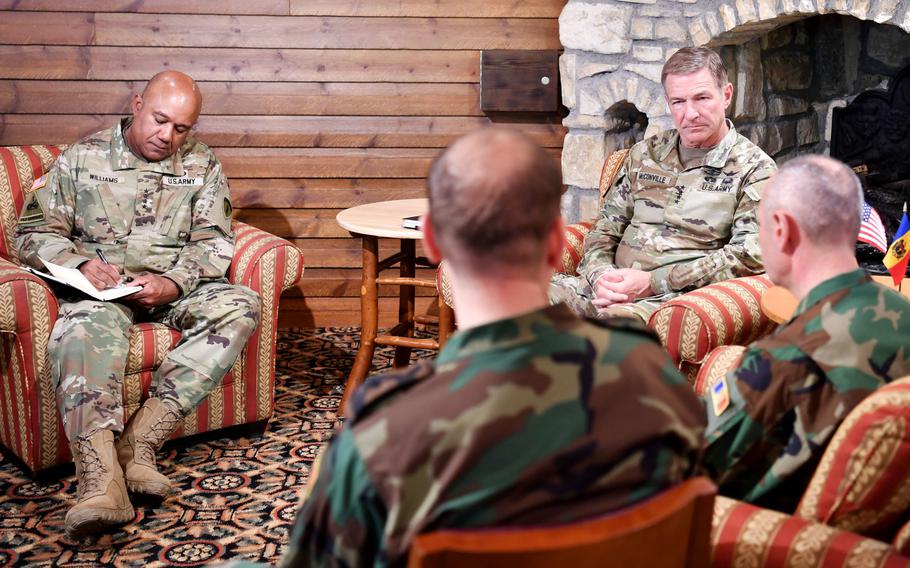 CUMBERLAND, Ga. (Tribune News Service) — The highest-ranking officer in the U.S. Army referenced the war in Ukraine during a speech in Cobb County, Ga., Monday.

The remarks from Gen. James McConville, the Army's chief of staff, came at the 70th annual Military Appreciation Luncheon, hosted by the Cobb Chamber of Commerce and the Atlanta Regional Military Affairs Council at the Cobb Galleria Centre. Hundreds of servicemembers, government officials and business leaders were in attendance for the celebration.

McConville, a native of Massachusetts, attended the U.S. Military Academy and received a master's degree in aerospace engineering from Georgia Tech. During his speech, he acknowledged two World War II veterans in attendance before leaving the dais to thank them directly for their service. The first was 103-year-old Charlie Duncan, who served as a combat engineer from 1944 to 1945 in France, England and Germany, and the other was 96-year-old Bob Brown, who served in the Navy during World War II and later as an Army officer.

"Those gentlemen represent the best of America," McConville said as he returned to the stage.

Noting the men were members of "the Greatest Generation," McConville said young members of the military today aspire to live up to their legacy. This is especially true, he said, in a world that is dangerous and challenging, invoking the Russia-Ukraine war.

He drew a parallel between today and 1981, when he graduated from West Point and heard from Ronald Reagan at commencement, who spoke about "peace through strength," McConville explained.

"He told us that a truly successful army is one that is so strong, so able, and so dedicated that it never is called upon to fight because no one would dare provoke it," McConville said. "And we have learned, if you want to win without fighting, you have to show you can win by fighting, and I've carried that philosophy forward ever since then."

McConville clarified that the U.S. Army also responds in times of disaster and crisis, like COVID-19.

"But at the end of the day, we exist to protect the nation," McConville said.

He touted the Army's decision to move combat troops into eastern Europe after Russia invaded Ukraine in February, saying that when he visited Lithuania, Latvia and Estonia earlier this year, the presence of U.S. forces was a relief to three countries worried for their futures.

McConville went on to praise Georgia for its numerous Army bases before urging the military and business-friendly audience to "inspire and hire": inspire more young people to join the Army, and hire more veterans in their businesses.

After McConville's speech, the 116th Army Band played the service songs for each military branch. Then, the USO, the congressionally chartered nonprofit that provides entertainment, recreation and other social activities to troops and their families around the world, presented its Patriot of the Year Award to civil rights leader and former U.N. Ambassador Andrew Young.

Susan Cahoon, an Atlanta attorney who chairs the USO of Georgia, said Young sang with his parents, volunteers for the Black USO, during his segregated upbringing in New Orleans. It was his love of and service to his country, she said, that made him the ideal recipient of the award.

Young was unable to attend the luncheon, so the award was accepted on his behalf by Gaurav Kumar, president of the Andrew J. Young Foundation.

Kumar read a short poem, "Where the Mind is Without Fear" by Rabindranath Tagore, "to summarize what (Young) would have spoken."

The poem ends: "Where the mind is led forward by thee / Into ever-widening thought and action / Into that heaven of freedom, my Father, let my country awake."

This story has been updated to correct a quote from Gen. James McConville. He said, “It has been said, you know, where American soldiers go, freedom follows.”