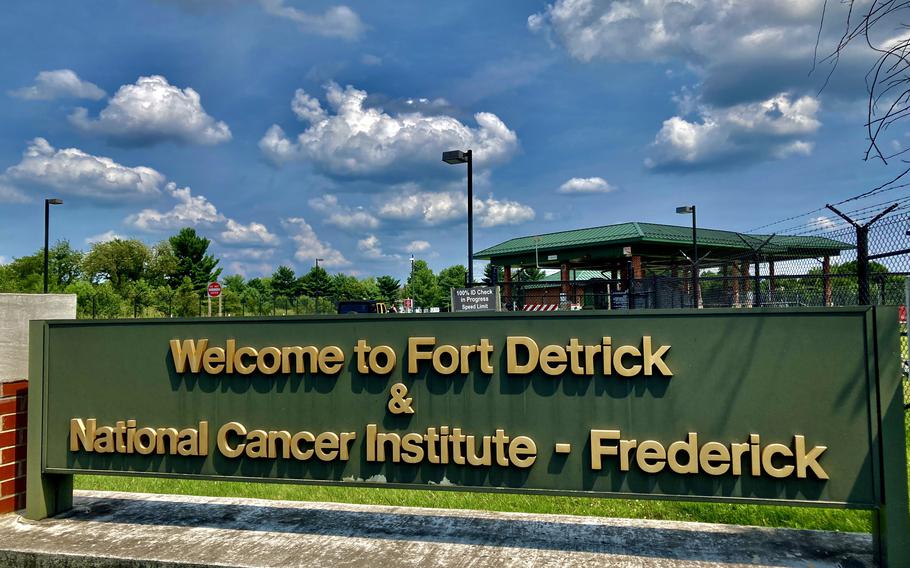 (Tribune News Service) — As the U.S. Army continues determining how best to clean up groundwater contamination caused by a former biowarfare test site in Frederick, Md., researchers are also studying what protective technology should be added to houses and condominiums planned to be built nearby.

Construction on the second phase of the Waverley View development is expected to begin toward the end of next year, said Christopher Dorment, chairman and owner of the Virginia-based Rocky Gorge Development.

This phase, with 122 houses and 180 condominiums, Dorment said, is planned for the 23-acre parcel between Shookstown Road and the southwest fence line of Fort Detrick's Area B.

Area B, a 399-acre property encircled by Kemp Lane and Shookstown Road, was used in the mid-20th century to test biological warfare materials.

Because of how scientists disposed of hazardous waste then — in unlined trenches and pits — the site's groundwater is contaminated.

Army scientists have spent decades studying the extent of the contamination and trying to address it.

In 2013 and 2014, they drilled monitoring wells just outside the Area B southwest fence line. Groundwater samples taken from these wells detected levels of contamination that could potentially harm residents of homes built on top of the property, if steps weren't taken to protect them.

Last year and this year, the Army drilled more wells on the future site of Phase 2 of the Waverley View development. Scientists wanted to see how far the contamination extended.

Results from the wells, installed farther from the fence line, did not detect potentially harmful levels of contamination in the groundwater.

A project manager for the U.S. Army Corps of Engineers presented data from the monitoring wells in October to the Restoration Advisory Board, which oversees Area B groundwater clean-up activities.

Dorment doesn't want future Waverley View residents to worry about how living at the development might affect their health.

Considering how federal and state agencies have scrutinized the project, it is shaping up to be incredibly safe, he said.

"They feel, and I feel, that if any measures need to be taken [to protect residents], they're going to be taken, and people are not going to be in any risk whatsoever," he said. "We're doing what we can to comply with their direction."

When the groundwater beneath a building is contaminated — as it is at and around Area B — there's a danger of "vapor intrusion."

In this process, chemicals dissolved in a property's groundwater can enter buildings through basements or foundations.

Chemicals can then degrade the quality of indoor air and harm people, especially those who are pregnant, or elderly or young children, or those with a compromised immune system.

However, the effects of vapor intrusion can be mitigated by installing certain technologies.

The Army would be responsible for paying for adding these technologies to homes with the potential for vapor intrusion, said Gary Zolyak, an attorney for the Army.

Construction isn't expected to start on houses beside the Area B fence line — where potentially risky levels of contamination have been identified — for six or seven years, Dorment said.

That gives the Army time to work with Dorment's team to determine the technology needed during the houses' construction to protect future residents from vapor intrusion, said Joseph Gortva, chief of Fort Detrick's Environmental Management Division.

Because of how the groundwater flows, the Army is not concerned about vapor intrusion affecting other portions of the Waverley View development, including the 70-acre parcel south of Shookstown Road.

That is where Phase 1 of the Waverley View development is. The developer will complete work on the first phase of the project, Gambrill View, in the coming year, Dorment said.

The Army isn't worried about the extent of the groundwater contamination — or which buildings it could affect — changing dramatically.

If the contamination got worse, the levels of contaminants detected in monitoring wells would increase, Gortva said. Instead, they've been relatively stable.

Still, he added, the Army will continue monitoring the contamination, just in case.

The Army and Waverley View Investors — the company that owns the future site of the Waverley View development — have a long, complicated history.

Then, in 2013, the property owner sued the Army for $37 million, accusing the Army of devaluing its land and stalling future development.

When the lawsuit concluded in 2018, the U.S. Court of Federal Claims awarded Waverley View Investors about $56,500 and let the Army monitor groundwater contamination on the property.

Since then, the Army and Waverley View Investors have worked well together, Zolyak said.

Dorment attended the Restoration Advisory Board meeting in October, participated in discussions and answered questions from board members.

In response to a question from RAB member Jen Peppe Hahn, Dorment agreed to return to a future meeting to explain how Waverley View Investors will tell residents about vapor intrusion mitigation systems installed in their homes.

"You're talking about something that's a little bit far off," he said, "but it's certainly a legitimate request, and we will honor it."