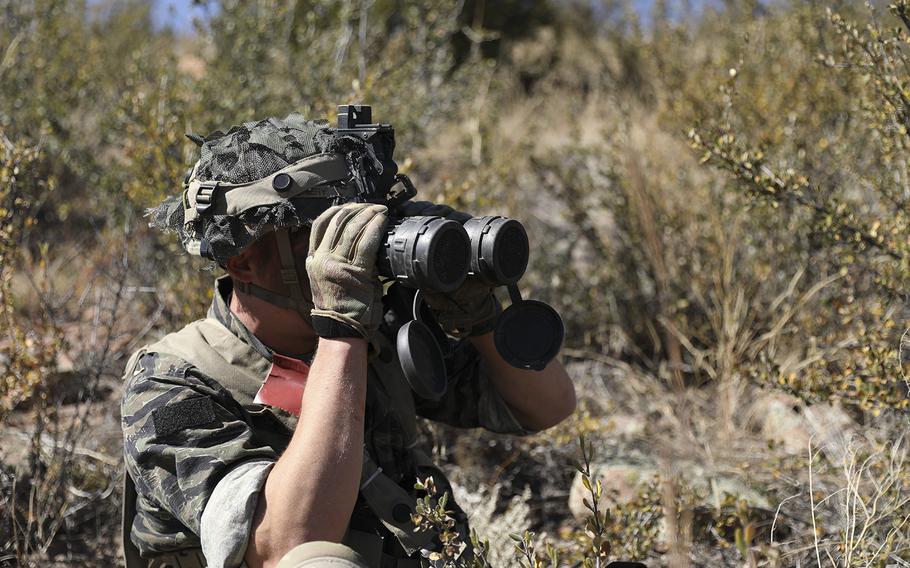 COLORADO SPRINGS, Colo. (Tribune News Service) — Soldiers with the 2nd Stryker Brigade Combat Team at Fort Carson participated in a live-fire exercise Wednesday as part of Mountain Warrior Strike, a 10-day annual event designed to be the culmination of a year’s worth of training and a rigorous final test of battlefield skills.

Up to this point, the brigade’s training has been held at the squad, platoon, company and other group levels. But during the live-fire exercise, all seven of the brigade’s units — six battalions and a squadron serving artillery, reconnaissance, support and other functions — converged on the range in the largest group exercise of the year to validate proficiency and readiness ahead of higher-level training at the Joint Training Readiness Center (JTRC) at Fort Polk, La., in January.

“All the elements of seven battalions are out in the field at the same time exercising and working through a lot of challenges, like how to maintain your vehicles, how to feed the soldiers that are in the field right now, how to get them water, how to get them (equipment parts), how to take care of them if they get injured,” 2nd Stryker Brigade Operations Officer Maj. Nate Welsh said. “What this operation has enabled them to do is exercise all the teams in their primary specialty.”

Roughly 3,600 soldiers across nine companies in the brigade’s three infantry battalions are assigned to the fleet of Strykers, an eight-wheeled armored vehicle equipped with remote weapon systems and either a .50-caliber machine gun or an MK-19 grenade launcher.

The 2nd Stryker Brigade is the newest brigade of its kind in the Army, Welsh said from inside one of the 30-ton vehicles as it crawled toward mock-enemy lines.

The artillery battalion went first, bombarding the target with heavy indirect fire as the Strykers waited to advance. From there, machine guns and grenade launchers would provide fire from a distance until rifle-laden soldiers completed the exercise by clearing enemy strongholds on foot.

“Based on the effects of that (initial) artillery round, we’re going to use that suppression to close the distance,” Welsh said. “We go from a bigger bullet to a smaller one ... and each of those blast (radii) allows the advancing soldiers to close that distance and employ automatic direct fire.”

A jungle of wires looped through radio equipment and other communication systems covering most of the vehicle’s interior surface area. Dust danced through the ceiling’s openings, coating everything inside in a thin layer of the stuff as radio chatter buzzed.

At the end of a jaunting ride, the Strykers’ back hatches fell and crews spilled out to join the one-sided, but chaotic, battle. Smoke and dust billowed from the autumn-hued hills while soldiers advanced to take cover.

“Get in the trench!” one of them screamed as rounds chopped the air. “Quit running on the high ground!”

Quickly, but methodically, the battalions’ roles unfolded in taking hills, then bunkers, then trenches. “Sappers” with the engineering battalion bolted with Bangalore torpedoes to breach barbwire as the entrenched troops looked on.

A fuse was lit.

To bodies pressed in the dirt, it felt as if the ground gave out entirely during the huge, half-second explosion that followed. Three seconds later, the troops were on their feet and running to rain the next bout of live fire.

Many of the companies’ soldiers had only completed the exercise’s dry runs using blanks, and Wednesday’s training was their first using live rounds.

“The live fire is absolutely the most realistic you’ll ever get to combat due to the fact that we’re shooting live rounds,” said Capt. Corey Masaracchia, commander of the 2nd Battalion, 12th Infantry Regiment’s Company A. “You’re trying to incorporate all the different aspects of what combat would be like.”

Such things continued in waves until the riflemen made their way to close-contact battle among the final group of enemy buildings, clearing each until the occupying foes were no more.

After the holiday season, the brigade will seek official certification at JRTC in the Louisiana swamps alongside other forces, including Canadian troops, Masaracchia said. Though Defense Secretary Lloyd Austin has not yet announced specifics on deployment for the 2nd Stryker Brigade, commanders emphasized the criticality of seamless preparation amid a growing hostile global climate.

“There are other groups (attending JRTC) nationally. ... We incorporate them into our plan as well,” Masaracchia said. “If we go to large-scale combat, we are going to have NATO allies with us trying to figure out how to operate, how to be in common speaking with them.”

Visit The Gazette at www.gazette.com